How close could a RADAR/radio telescope be constructed near a town?

I'm working on a story set in the early 2000's and an integral part of the story is a large telescope array in Nevada, that uses both passive radio observation and active RADAR transmissions to observe objects in space. It is owned by the National Radio Astronomy Observatory, which subsidizes the nearby town. I wanted the array to close enough to the main town so that characters can go to-and-from the array relatively fast and if possible visible from several locations around the town.

Since civillian radio and tv broadcasts would interfere with the telescope array, I was wondering if the array could be built either with-in or very close to the town. The town is no bigger then a few thousand people and is in a pretty flat barren expanse of land. So how close could you realistically build the telescope array to the town?

I work in radio astronomy, and our preferred distance to a town is honestly as far as possible! There are plenty of devices that can interfere with observations, from dog collars to toasters to electric blankets. There's an amusing story from the 1990s about a mysterious class of radio sources called perytons, which were eventually found to emanate from the open door of an observatory microwave!

Other folks have mentioned the Green Bank Observatory in West Virginia, which lies on the edge of the town of Green Bank. It's within the roughly 10,000 square mile National Radio Quiet Zone, but on the observatory grounds, there are additional zones, designated Zone 1 and Zone 2. In Zone 1, there are some extreme restrictions; for example, all vehicles must be diesel, as non-diesel vehicles can be strong sources of broadband emission.

In Zone 2, the measures are laxer for logistical reasons - the observatory does need things like microwaves and servers, though some are shielded where possible. That said, things like cell phones and Bluetooth devices are prohibited, and there is no Wi-Fi service (make sure your laptop has an ethernet port!). If you want to take pictures, you'll need to use a disposable camera. Some of these bans extend in a ten-mile radius of the observatory.

At the GBO, the primary 100-meter telescope is located ~1 mile from the closest edge of the observatory grounds, and a little further from the center of town - which, by the way, houses only a couple hundred people. This works fairly well, but that's partly because Green Bank is small and isolated, folks typically obey restrictions, and the RFI team at the observatory knows what they're doing (they do chase down violators if they can identify rogue sources).

I think that a town of a few thousand people - tens of times the size of the town of Green Bank - should at minimum be several miles away from the telescope. They would need to be okay without cell phones, with using ethernet connections and diesel vehicles, and minimizing the use of devices like heated blankets . . . and microwaves. Enforcing even normal NRQZ restrictions on folks who don't want to abide by them might be difficult, particularly if there are many out-of-towners who aren't used to the regulations. 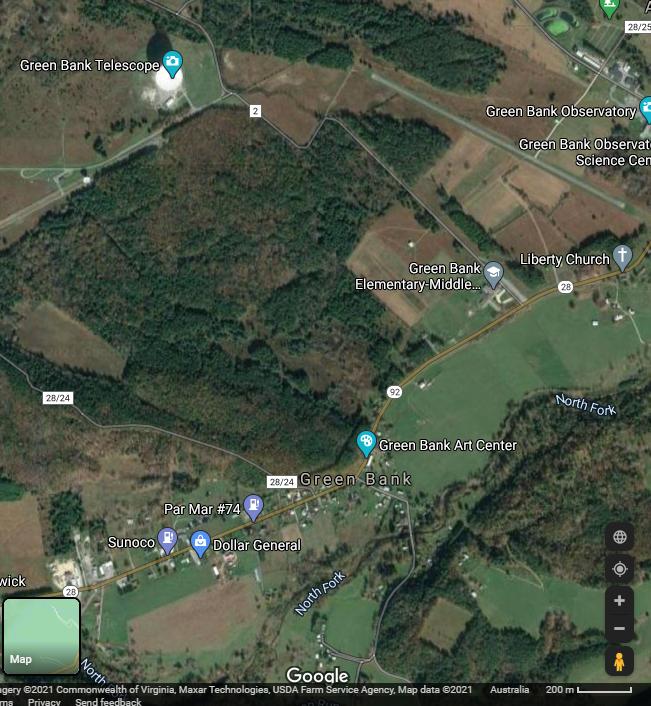 Mobile phones and wifi devices are banned in GreenBank, but the observatory is a few minutes walk from the town centre.

That link goes through a lot of the story of the towns radio ban - from enforcement by a van with sensors looking for rogue wifi, to those who swear by the health benefits of living in a community free of high intensity RF.

MIT's Haystack Observatory is only about 8 miles from downtown Lowell, MA. Lowell is a fairly big city, with a population of over 100,000. Suburban towns in the area are also relatively populous. Haystack performs both radio astronomy observations and radar space surveillance. The "to-and-from relatively fast" between the observatory, MIT main campus, and Lincoln Lab is an important consideration that outweighs the disadvantages of a not very quiet site.

Jodrell Bank, one of the first radio telescopes in the world, is located 13KM from the nearest large town of Macclesfield and about 27KM from the city centre of Manchester in the UK.

There are also small settlements like villages and farms within 1KM of the dish, as well as a major railway. 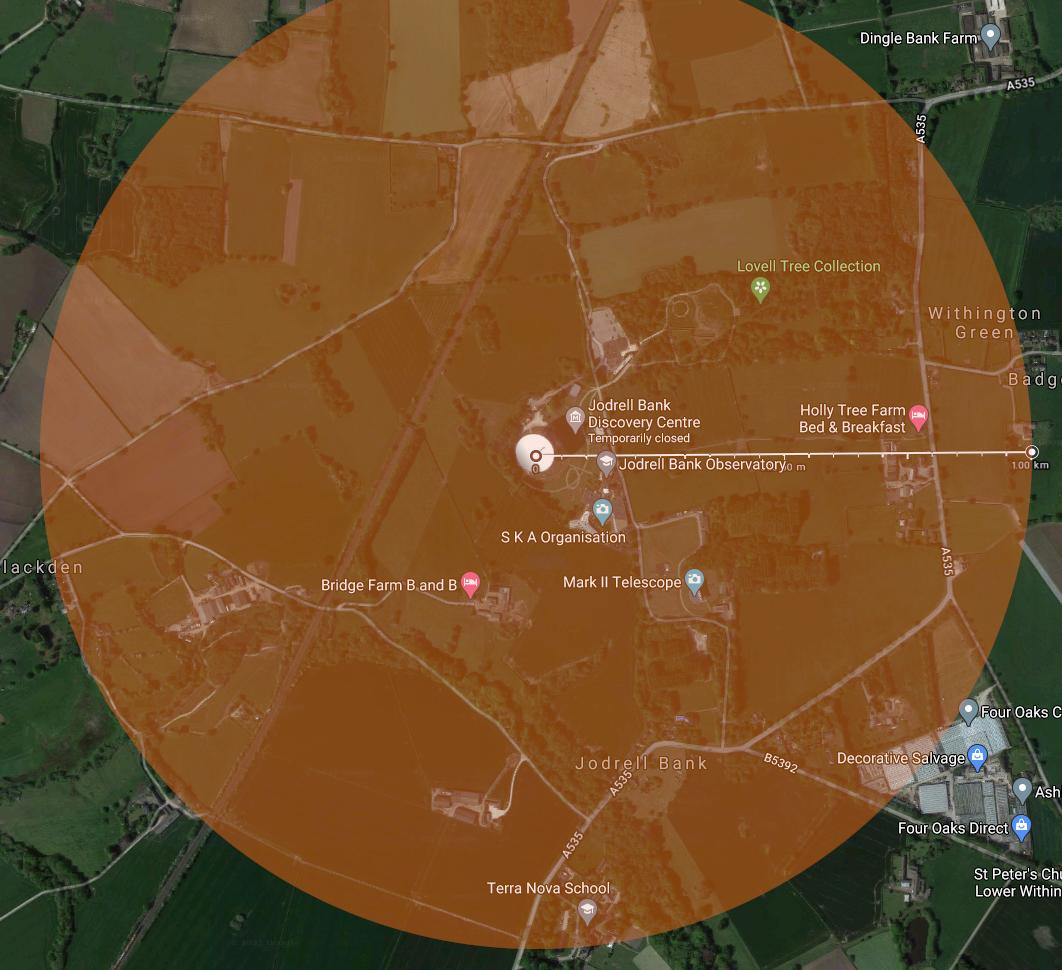 Not the answer you're looking for? Browse other questions tagged science-based science-fiction city radio or ask your own question.

28
How close to interstellar space travel could humans get in the near future?
7
How close is too close for a human habitation to be near an erupting volcano?
5
How could a radio system (or an alternate) work in an isolated underground society?
7
Sci-fi scenario: could all radio communication be blocked?
17
Could a large radio telescope survive interstellar spaceflight?
3
Could a Superhero with radio wave powers hear the radio?
6
Could a passive radar-sighted creature see by space radio emissions?
8
Can we safe FTL from paradoxes by using a Multiverse?
11
How can we make a one-way radio?
5
How much further could ship-based radar see on a flat world?