How quickly would an inch per hour of rain flood an enclosed 2x2 mile area?

In my setting, an apocalyptic supernatural event made the earth into a gridded globe of "squares" (more like columns) that are roughly 2x2 miles at sea level, getting larger going up and smaller going down (so there are no "gaps" between squares at higher altitudes). Each of these squares is subject to a different supernatural gimmick, and the first one that my protagonists start in is one that will, for obvious reasons, come to be known as "Fishtank".

The heroes' immediate concern, however, is getting out of this place before the flooding starts making the place a serious drowning hazard, because things are crazy all over the world, this is just the start of the heroes' problems, and nobody's coming to help them. The end goal story-wise is to have the heroes spend a week at most in this place, with the flooding making survival increasingly dangerous all the while, before they finally come up with a way to climb high enough to escape and then safely get down to the ground. As such, I need to get a good grasp of what exactly flooding an enclosed area with an inch per hour of rain would look like, and how quickly the flooding would actually happen, so I can adjust my numbers accordingly to make the flooding happen fast enough to be dangerous without happening so fast that the rain itself would be a serious danger even before the flooding happened.

Assuming this 2x2 mile square is in the middle of a flat suburban town, How long would it take before the sewage systems and other below-ground spaces are saturated, visible flooding begins, and the water level of this square starts rising?

He should make a week assuming there are some two story homes.

the storm systems and soil will reach saturation within an hour or so for most kinds of soils. Storm drains don't have much internal volume and even sandy soil with the best drainage will reach saturation in a few hours. Which means you are only avoiding 1-3 hours of buildup on the first day, after that the water rises an inch an hour. By the end of day two the hero will living on the second floor and only be moving around the neighborhood by swimming or boat so better hope they got enough supplies on day one and two. In 7 days water will reach the second story of most homes. (14ft at 1 inch per hour) Few buildings in the suburbs are more than two stories, (in some suburbs even two stories is rare), so after seven days they will be living on the roof of the tallest building, better hope it is a southern town with fairly flat roofs. If they luck out and find a home with a tall basement/elevated first floor,(basically a house that has a decent flight of stairs going to the front door like the one below) they might be living indoors until day eight. 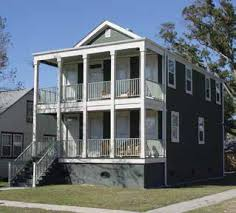 Note some buildings will float once the water reaches 12ft or so, making them begin to fail structurally, which could add a bit of excitement on day 6. with the areas being over a mile wide tides may come into play.

So your timeline is as follows.

Day 1: soils and drains fill, basements flood, some buildings may fail as this occurs, water starts to flood the first floor of many buildings. Ends with 21 inches to 2ft of water.

Day 3: getting from house to house is extremely difficult (boats or swimming), fresh water stored in first floor water heaters is inaccessible. Ends with 6ft

Day 6: some buildings begin to float causing them to fail. Ends with 12ft.

Day 7: second floor begins to flood in all but most elevated homes, it becomes fairly easy to climb onto first floor roofs from the water. Ends with 14ft.

Day 8: even most elevated buildings experience flooding on second floor, only attics or will be dry. Ends with 16ft.

With the limitation given above -- that the storm drains under the square are blocked off -- surface flooding will start as soon as the drain lines are filled. This has a lot of variability, because it depends on the climate the drains are designed for, but in a worst case it might take as little as ten minutes for the storm drains to fill up, after which water levels on the surface will rise as fast as the rain falls (that is, at an inch per inch of rain, presuming the surface streets also can't drain to the outside of the 2 mile square). Thus, barring only the first couple inches at most, the water on the ground will rise at a rate of about two feet per day until it gets to the top of that invisible wall.

The permeability of soil enters into this, a little, but given it's a town, there will be enough roofs and paved areas that rain water soaking into the soil won't have a large effect, even at the start.

That might not seem important, but it really is. It rains in Texas. Holy cow... it rains. I watched a 20-foot-deep arroyo fill with rainwater in seconds.

Now, I'll grant that I had no idea how much area constituted the drainage basin for that arroyo and no idea how long or how hard it had rained anywhere other than where I was standing. But I still think the experience was on-point.

Before you get too excited over my overabundance of panic, let's give this a bit of scope. Million-gallon swimming pools exist. Such a pool could be 267 feet x 50 feet and 10 feet deep (Source). Which seems much more manageable... until you realize that you need to completely drain that entire swimming pool each and every minute of the day....

A 24-inch pipe will allow 18,000 gallons of water to flow per-minute. (Source) I don't know if that's pressurized or free-flow. I don't think it matters.

For convenience, let's assume that 4-square-mile spot was all flat, level grassland (it isn't, you said it was inside a city, I'll get to that). You'd need 64 24-inch pipes evenly tapping the surface of that space to drain all the water.

Which begs the question, would a city have 64 24-inch pipes (or their equivalent) in a 4-square-mile section of city to drain water?

Answer: Unless your city was already one that had to deal with large amounts of water, there simply won't be anywhere near enough capture volume to handle that amount of rainfall. Citizens living inside the rain zone would experience backed up sewers in minutes. Backed up storm drains in 1-2 hours. And would be majorly hosed in less than a day.

Citizens living outside that space would be little better off. The further you are from the center, the better it is (obviously), but the city itself would be digging new channels to redirect rainfall immediately.

But, frankly, that's the least of your problems

You said this was a constant rain. It doesn't stop. Ever.

You see, I also once lived in St. George, Utah. A fluke rainstorm turned a creek that's normally so small you could hop across it into a honking huge river. I helped clean out houses that eventually fell into that flooding river and were carried downstream. Whole houses... This all happened in one day.

Listen to me, Jason. Backing up sewers is the least of your problems.

Yeah. Backing up the sewer is only your first problem. If that went on long enough that 4-square mile section of city could be anything from a deep new reservoir from the erosion to an amazing Mangrove grove if you're a bit further south. Which leaves us with one more concern...

Two miles is 126720 inches. At one inch per mile, it will take 5,280 days to fill the cube with the following simplifications.

Not the answer you're looking for? Browse other questions tagged weather water or ask your own question.

18
How long would it take before the water flowing out from an encased and flooded suburb is drinkable?

16
How could constant or near-constant rain in an area be possible?
3
If the rain all fell at once, how would Earth be different?
4
How would a 384 hour day/night cycle on a desert planet affect the weather?
11
Hurricane-force winds or gentle breezes in an O'Neill Cylinder?
6
How long would it take for water vapor from an ocean asteroid impact to rain back down?