OK, faster than light isn't possible & a merely significant fraction of it can begin to stretch the bounds of reasonable reality as that fraction increases // so a less unreal way to allow us our interstellar travel is needed.

So that's pods that lower body temperature until you reach a point below freezing where all biological activity is suspended.

As well as the obvious cooling equipment these will include a haemodialysis machine, urinary catheter & intravenous drip.

The subject is initially sedated & then over a period of time their blood is saturated with antifreeze proteins, urea, glucose and glycogen as they're dehydrated as far as the human body can tolerate while the temperature is slowly dropped.

By the end of three days the temperature is below freezing & they're a human popsicle.

When they arrive the process is reversed as they're slowly thawed out.

Is this plausible for unmodified humans?

[Note: by unaltered / unmodified I mean only that they've not been genetically modified] 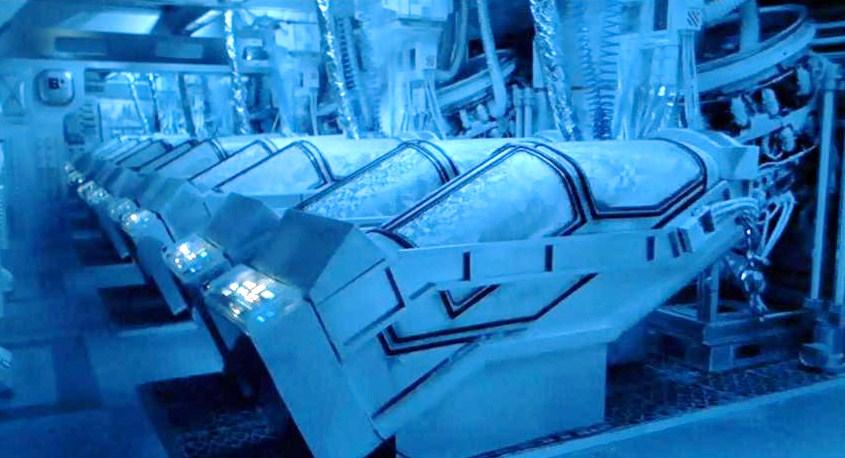 A few of the links & resources I've been using.

BBC - Earth, When your veins fill with ice: "University of California, Berkeley and Sheba Medical Center in Israel, successfully used antifreeze proteins isolated from Antarctic fish to freeze and preserve rat hearts for 21 hours // transplanted into recipient rats, where they continued to beat for at least 24 hours"

For at least 24 hours presumably means the subjects were destroyed after 24 hours so the long term success (or not-success) of the technique for longer periods isn't clear either way from that.

You’ve done some great research and have outlined an effective theoretical approach to putting people on ice. However, ultimately the success of a cryonic procedure comes down to how good we are at repairing tissue. To thaw out a colonist and have more than meat, you need some sort of nanobot or other cellular repair technology that you can use on your patients as they thaw out. Here are the main examples of damage you would need to treat.

When you freeze your patient, the most obvious (and acute) source of damage to the body is the formation of ice crystals. Large-scale tissue structures are mulched, cell membranes are blown apart, and even delicate internal structures and proteins are disrupted. As anyone who has thawed and cooked a frozen onion or hamburger can attest, the act of freezing and then thawing results in a noticeable change in texture and flavour (and a significant loss of fluids as everything drains out of the now perforated internal structures).

I'm listing this one for completeness' sake, but you have a solid theoretical way of avoiding this issue. So with direct mechanical trauma solved, what else is there?

There are a great many molecular structures in a given cell that are delicate and energetically intensive to maintain. While reducing temperature reduces chemical activity, there is some debate as to how cold you need to get before the more short-lived molecular structures in the body begin to degrade. When your cells are warm enough to engage in homeostasis, this short lifespan is an asset. If it is cold enough to stop biological activity and inhibit chemical activity however, it becomes a liability. These chemical springs will certainly uncoil less quickly, but they will still uncoil. ATP will dephosphorylate, RNA will slowly fall apart, etc.

Theoretically, you could get around this by freezing people down close to absolute zero, but that’s a challenge even on Earth where heat is a lot easier to get rid of than it is in space. I would imagine a compromise is made here, finding a minimum feasible temperature that balances reduced the decay damage (and repair/thaw time) with the machinery needed to keep everyone frozen.

We contain quantities of radioisotopes of carbon, phosphorus, and other elements. These are constantly decaying, and your body is continually repairing this damage. However, if you are on ice, radioactive decay will continue (it doesn’t particularly care about temperature) but the repair systems are now on hold. Damage from radioisotopes such as C-14 and P-40 undergoing their usual decay will accrue throughout the body, both in the form of the beta particles released and in the form of a generally rather important phosphorus suddenly being calcium and carbon being nitrogen, with knock-on effects for the molecule or protein it is a part of.

It’s worth noting that these are both quite stable radioisotopes with long half-lives (10^3 years for C-14, 10^9 for P-40), but we contain a lot of both, and both are incredibly important wherever they are. Carbon is the backbone of essentially every organic molecule, and the change in electronics and available covalent bonds from C to N presents pressing structural issues. And with phosphorus, it's almost worse: each nucleotide in your DNA has two of these, one joining it to each of the nucleotides on either side. Neither are great atoms to suddenly not have, and then there's that beta particle I mentioned - it's also highly likely to find a new friend in the area.

So, damage will accrue beyond the initial freezing. Ultimately, what your society will need to make this viable is a solid foundation of cellular repair technology, in whatever form that takes. Nanomachines are generally the most popular take here, and if you are spending three days to freeze someone, spending another three to infuse them with repair bots as they thaw out seems pretty reasonable. This does mean your setting has access to healing nanobots, which will have knock-on effects on human lifespan, disease, and what exactly constitutes ‘serious injury’ and ‘long-term treatment’ if most injuries are curable by a day or so on the slab while the nanites work.

I’ve done a surface level discussion of these topics, but if you want more depth I would recommend a couple YouTube videos by Isaac Arthur, a physicist and futurist, that discuss this topic. One is more general information on Cryonics (he focuses on the societal aspects of the technology and its uses but also gives more details on limitations), while the other is more focused on sleeper ships like your use case.

The subject is initially sedated & then over a period of time their blood is saturated with antifreeze proteins, urea, glucose and glycogen as they're dehydrated as far as the human body can tolerate while the temperature is slowly dropped.

By the end of three days the temperature is below freezing & they're a human popsicle.

You want your description of the process to sound plausible, not to be reproducible.

Don't go with too many details on what is used and why; reading your description the first thing I thought was "why are they giving glycogen and glucose if the subject is going to be hibernated? The metabolic need will be 0 and all that chemical energy lying around is just an invitation for decomposers".

Stay vague: the fewer details you give, the fewer hooking points there are for anybody to question your description. Again, your goal is apparent plausibility, not reproducibility. Mentioning antifreeze proteins is vague enough, do the same with other substances.

I haven't linked them here but there are several articles published recently on research into inducing 'hybernation' like states in mammals that don't naturally enter such states e.g rabbits.

For extended periods of torpor you could 'realistically' adapt research from some parts of cryogenics research E.G. anti-freeze compounds and computer controlled intravenous oxygenation/nourishment/muscle stimulation etc to greatly extend the period of torpor sleep out to several months/years and/or lower the body's core temperature slightly more to induce an even more effective torpor state.

I would suggest however that crew/passengers would have to cycle through periods of raised body temperature/dream states to maintain their mental faculties. Also after reaching the maximum 'safe' limit for induced hibernation people would have to be woken and allowed access to normal movement, exercise and food for an extended period.

So if as per you example the trip takes 100 years crew would have shifts in pods, followed by rest period during which they recover and then an active duty shift. So from the crews perspective the trip might have 3 years of torpor followed by 1-3 month recovery period and 3-6 months of normal work before they go back to sleep for another 3 years. You could go with say an 80/20 sleep awake cycle for the trip.

The downside is that you still have the problem of part of the crew being active for a one tenth to one third third of the trip (choose the stats you want) which increases the use of consumables.

The upsides however are that;

A) Induced Hybernation is actively being explored for space travel, cryogenics is not. Fact is we're not even close to solving the complexities involved in reviving advanced living organisms/tissue from deep frozen states after extended periods of cryo.

B) there has recently been some evidence come to light from experiments with animals that spending a period of time in an induced torpor may well extend an animals natural lifespan. So your crew might find their 'normal' life spans being greatly extended simply because their bodies have been in 'resting state's for such long periods that they haven't accumulated the normal amounts of damage associated with aging.

So, if for example the average lifespan in your word is 120 years and the average age of the crew is 30(ish) when they start the tip and you go with the 80/20 sleep/wake cycle then assuming drugs & cold etc do help slow down the aging process by just half they'll all be about 90 when they arrive. The equivalent of say a healthy 60 today. Not good but not bad either. And you of course you can play with the figures.

And note you can cryofreeze eggs sperm or ova. So expanding the population is readily doable.

Sorry if this is not the answer you wanted but for world building purposes with slow travel times it is 'doable'. Good research BTW

I'm not kidding. Just Microwave the almost corpses perpetually, at the direct amplitude/frequency to prevent them from freezing. You might cause other types of damage but you would successfully stop damage due to ice crystals forming from occurring. You would need to perpetually pump heat out, and due to how long the journey is, any sort of active radiator where you spray out materials to take away waste heat like is inferred but never actually directly stated in the expanse because the idea is mildly stupid is an option. It's going to need some large radiators. As for the microwave solution, the idea is inspired by some research on cooler technology to keep meat fresh to prevent ice crystal formation.After all, what are humans made of, but meat?

Not the answer you're looking for? Browse other questions tagged science-based reality-check biology space-travel cryogenics or ask your own question.