Densest breathable atmosphere composition for a human being without breathing equipment

A large sealed pressurized environment is set up in an even larger industrial complex.
Workers get in and out of the environment for their work shift using protections suit and, if necessary for prolonged (day after day, year after year) exposure, breathing equipment (only if necessary in the atmosphere you are going to provide). Imagine an average 6 hours shift.
Robots are not allowed for plot reasons.
Suitable ports are setup for access to the contained environment to avoid dispersion and provide necessary decontamination (IF necessary by your answer).

The character of the story, let's call him Hans, for plot reason must enter the environment without protection suit or breathing equipment. He will stay inside for a relatively short time from 15 minutes to a bit less than 6 hours. The upper limit is determined by your answer. If the atmosphere you will provide would likely cause dizziness after 30 minutes then he will leave after 30 minutes. He is not forced by others, he enters voluntarily but in a hurry and exits undetected once satisfied.

It is fine if he is going to have some adverse effect. Also some permanent damage is acceptable (poor Hans may differ but he is not the one writing the plot).
But the requirement is that he should be able to survive and retain consciousness throughout. He should also be able to hear other people talking (if close enough).

Further specification.
The environment size is not fixed and you can change it if you find it necessary. Am imagining a large room 30x10x10 meters with several controls along the walls, tubes running through, expansion vases, etc. Could be bigger if necessary.
The environment itself can be adapted as necessary. For instance we can assume there are vents to mix the atmosphere and not allow the heavier components to settle on the lower part of the environment.
Pressure, temperature and humidity can be adjusted as needed to fulfill the requirement.
Hans is just a normal human of average size, fitness and training. He can hold his breath for about a minute if not under exertion.
Hans will not do heavy physical activity while inside. He will mainly walk around, hide and listen.
Hans is determined and will endure suffering. He is no superman though.
Cost for the production of the necessary component gases is not a concern. The owning company is sure will get much more in return.

Ideal side effects:
Ideally the atmosphere will reduce visibility a lot. It is fine to add water vapor if necessary. Workers may navigate the place through special equipment (HUD display or whatever).
Hans should hear sounds and voices. They will be altered by the density of the atmosphere. But words should still be discernable (if Hans is close enough).
Would be a plus if the atmosphere can somehow be connected to an existing industrial process (like Sulfur hexafluoride is in the electrical power industry)

Question: what is the densest breathable atmosphere composition that would allow survival for a limited (from 15 minutes to almost 6 hours) time?

I have found this answer: Dense atmosphere and survival but it is referred to a planet while my question pertains to an artificial, enclosed atmosphere to be survived only for a short time.

Also researched Sulfur hexafluoride and Xenon. On the latter article I found:
"Dense gases such as xenon and sulfur hexafluoride can be breathed safely when mixed with at least 20% oxygen. Xenon at 80% concentration along with 20% oxygen rapidly produces the unconsciousness of general anesthesia".
While they provide a reference it is not clear if it is about the claim about the percentage levels or the purging from the lungs of heavy gasses. I can't access the referenced article in Chest. So I can't accept the 20% claim of the article.

Edit: as by Andrew comment, to allow short decompression times a maximum of 4 atmospheres should be considered. Hans cant stay hanging around in decompression for hours.

Getting in is easy. Getting out is hard.

Your question touches on two issues: 1. The atmospheric pressure, and 2. The composition of the gases being breathed.

I'm a recreational SCUBA diver. I've stood on the bottom of the sea breathing normally even though my body and the air I was breathing were under much greater pressure than on the surface. The human body can handle a surprising amount of pressure. The problem is getting back to atmospheric pressure. That takes much longer than getting to the bottom. Consider the record for deepest SCUBA dive:

...Ahmed needed approximately 12 minutes to reach his record depth, which was measured with a specially tagged rope that accompanied him. But, to ensure safe passage back to the surface, it required nearly 15 hours to have Ahmed return back for air after breaking the record, due to the various risks of the water pressure at such depths.

Ahmed survived 33 times the atmospheric pressure of surface air, and he got to that pressure over the course of only a few minutes. But decompressing too quickly would cause potentially fatal decompression sickness. Even at a much lower pressure, Hans will need a gradual reduction in pressure. Maybe there's a pressure chamber at the exit that gradually steps down the pressure?

It's worth noting that commercial divers in the real world have the opposite approach to dealing with pressure than the workers in your world. In your world, workers wear pressure suits while working in order to protect their bodies from the pressure. Real world saturation divers work at pressure and live in special pressure chambers that keep their bodies at high pressure even when they're on the surface. So in addition to a very large paycheck, saturation divers get free housing between shifts... 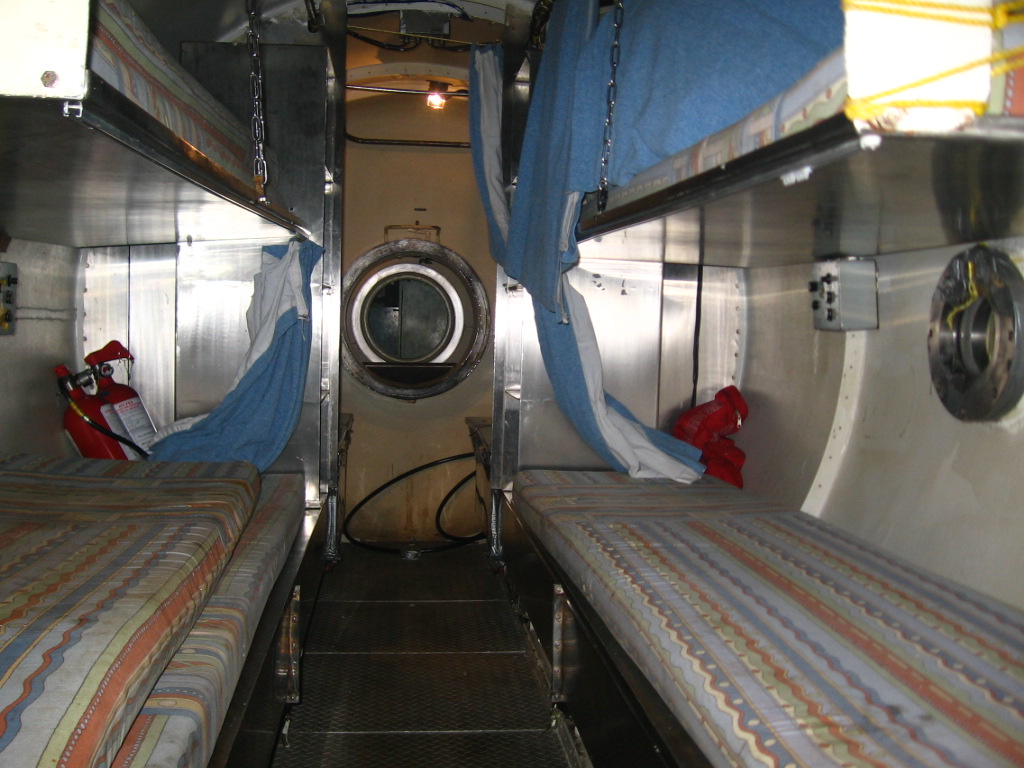 If you want someone to survive in a high-pressure environment, you should know there are special considerations for the gases you can breathe at pressure. Even oxygen can become toxic. So whatever gases you plan to use in your atmosphere, don't assume that they'll behave the same way as they do at normal pressures. Ideally, you'd want an atmosphere composed of something like hydreliox, which combines helium, hydrogen, and oxygen. Just tell Hans not to light a cigarette...

If you stretch the definition of "atmosphere" a little, you can use some kind of perfluorocarbon liquid of the sort that might be used for total liquid ventilation.

These things are pretty dense... perhaps as much as twice the density of water, and so far higher than the density of any mere gas. Their viscosity makes cycling the stuff in and out of the lungs quite hard, which has limited their usefulness in various real life situations.

In your case though, the inability of liquid breathing agents to remove enough CO2 from the lungs actually fits your plot requirements. A human could enter the liquid, and breathe from it, but their CO2 levels will rise afflicting them with hypercapnia which will eventually become fatal if left unchecked. The rate of CO2 intoxication can be set to suit your plot needs, with futuristic lower viscosity breathing fluids handwaved in as necessary.

If for whatever reason you don't want to go through decompression you could try prebreathing pure oxygen for some time and then just holding your breath while inside. The higher the pressure, the longer you will be able to breath-hold (20 mins should be easy with some training). You should be good at 20 atmospheres, maybe even more. Do note however that Hans will almost certainly pass out the moment he jumps out of your hyperbaric chamber due to shallow water blackout.

Boring minutae about SCUBA-like answers: At 4 atmospheres of pressure (considering normal air) you have about 20 minutes before you need to decompress. If you mix atmosphere to be 30% Oxygen and perhaps a bit of Helium, you will get a bit more time in.

For extra fun, do note that you can't just jump out of your pressurized environment after taking even a single breath in. You need to fully exhale and reduce pressure until air in your lungs expand to normal lung volume. At that point leftover air will expand in your lungs and you repeat exhale-depresurise process again as many times as needed. I am assuming that ruptured ear drums are not an issue for poor Hans. Also, entering in a hurry might also not be the smartest idea, your eardrums will suffer.

For more physics inclined people, please check what happens with temperature of Air once you enter / leave. You might get free burns and/or icicles on entry and exit.

You want an atmosphere which is not instantly fatal but also not survivable for long, so you want it to be at or above the upper safe limit.

You might find the answers to this queston and the sources cited in those answers, to be useful:

The conclusion to my answer was:

So a breathable atmosphere could possibly have a total of pressure of 3,950 milimeters of mercury of nitrogen, argon, and oxygen, which would be about 5.197 times the sea level pressure of Earth's atmosphere.

In any case you might want to find sources for the upper limits of breathable atmosphere and find out if tests determined how long an atmosphere is breathable at various pressures and compositons.

I note that the composition of an enclosed atmosphere might eliminate a numbe rof industrial processes from taking place in that enclosure.

Not the answer you're looking for? Browse other questions tagged science-based near-future air or ask your own question.

7
What would be the effects of changing the composition of air in order to increase its density?
4
Dense atmosphere and survival?
3
How would a human body behave if the atmosphere pressure were 2Atm at the sea level?

24
What effect would liquid sulfur oceans, sulfur dioxide in the atmosphere have on visibility, sound propagation and other environmental information?
15
What can I add to an oxygen/nitrogen atmosphere to make it unpalatable or poisonous to humans, yet stable and breathable to local creatures?
7
How would an ecosystem based around chemotrophs produce oxygen?
4
Would this type of atmosphere be suitable for human life?
7
What's the minimal space/mass required to feed a human indefinitely with advanced technology?
6
Navigating a sea of sulfur hexafluoride
1
What needs to be changed in the structure of human lungs to be able to filter the inhaled air from heavy particles and toxic gases?
3
How to stop genetically modified bacteria from creating a catastrophic greenhouse effect?