As explored in my last question, my sci-fi civilisation have figured to make a functional suit of armour out of invincible unobtainium. However, they find themselves facing another problem - a suit of unbreakable plates is little use if the enemy can just shoot through the visor or the sensor holes. How can I design a suit of unbreakable armour to best protect the non-unobtanium parts, as well as the decidedly not unbreakable human inside?

From the last question, unobtanium has the following properties:

There are some other good answers, but we're talking about invincibility here, which is why, starting with my answer to the previous question, I'm feeling pessimistic.

Particularly, I'm feeling like your threat envelope may include such drastic measures as detonating a nuke (and I don't mean any puny "tactical" nukes, either) right in your soldier's face. In other words, protection against projectiles is great and all, but if being hit with a ship-killer laser results in a mission kill, we're not there yet.

So... I present to you, shutters and spares.

As other answers have already mentioned, your first line of defense is going to be making the holes by which your sensors (cameras?) "see" as small as possible. The next step is to design a system that allows you to slam a cover ("shutter") over the sensors as quickly as possible when you detect an attack with the potential to damage the sensor. If you can do this before the attack hits, even better, but since the attack you're mostly worried about involves large amounts of radiation, your first warning may be the sudden thermal spike as your sensor turns into disassociated ions. At that point, you're mostly engaged in damage control and hoping you don't get so much bleed-through that it fries the computers inside the suit.

That's where spares come into play. Hopefully you aren't facing an enemy that can dish out such attacks with impunity (or else you're probable hosed). Your design goal is for the user inside the armor to be able to replace the cameras when they get fried. (Tip: this may be easier if they tend to get vaporized.) Be sure to do this while the outside protective cover is closed. You'll still be blind, but it won't be an instant mission kill.

Oh, and since unobtanium is perfectly reflective, you could also employ retroreflectors surrounding the sensor apetures, as suggested by DKNguyen (thanks!). This won't do much against bombs, and an enemy firing from orbit might be able to get out of the way of the reflection in time, but it may cause any nearby attackers to think twice.

(Overkill? Maybe, but the OP did say invincible; my goal is literally something that can walk through a point blank nuclear blast and remain Combat Effective 😁.)

Keeping the person safe is pretty straightforward, as you can pipe all of your sensor data into the armored suit through a rather small cable. Start with your impervious suit, slap as many sensors as you need on the outside, and then just run one cable through the armor - your armor is exactly protective as before, except for the fraction-of-an-inch hole through with the data is transmitted. You can put the hole in a less-accessible spot like the armpit or sole of the shoe, and the armor loses virtually no ability to protect its wearer. The data port is just one more joint in the armor that should be protected with overlapping plates or some other covering.

As for protecting the sensors themselves, that's a little trickier, since you can't cover them entirely with unobtanium, or else they won't be able to see anything. But since unobtanium is indestructible and inflexible even in thin filaments, you can cover your sensors in an unobtanium mesh, which will still allow them to see, but will not allow physical projectiles to reach the sensor. You can make the mesh as fine as needed to block arbitrarily small projectiles, with the tradeoff of limiting your view somewhat, although that can be mitigated by adding more sensors.

I can't think of any way to protect against electromagnetic spectrum weapons, as if the sensor has the ability to receive useful incoming EM radiation, it can also receive harmful incoming EM radiation. You'd need some very fast-acting mechanism to detect harmful radiation before it actually causes damage, which then closes a shutter over the sensor. Functionally, though, this still allows the enemy to temporarily blind the wearer, as the sensor will remain inoperable until it's moved back to safety (which might be difficult if all your sensors are blinded).

That's how the soldiers in WWI were able to look over the trenches without having to poke their head out, where anybody with a rifle or a machine gun would have been more than happy to put some lead into it. 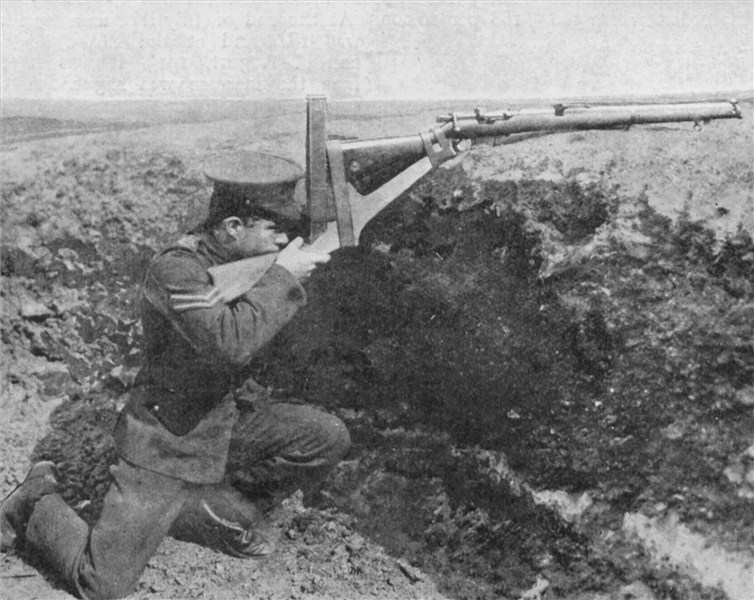 Even if the enemy aim at the periscope, it won't reach the bearer's head.

Don't turn your back on the enemy 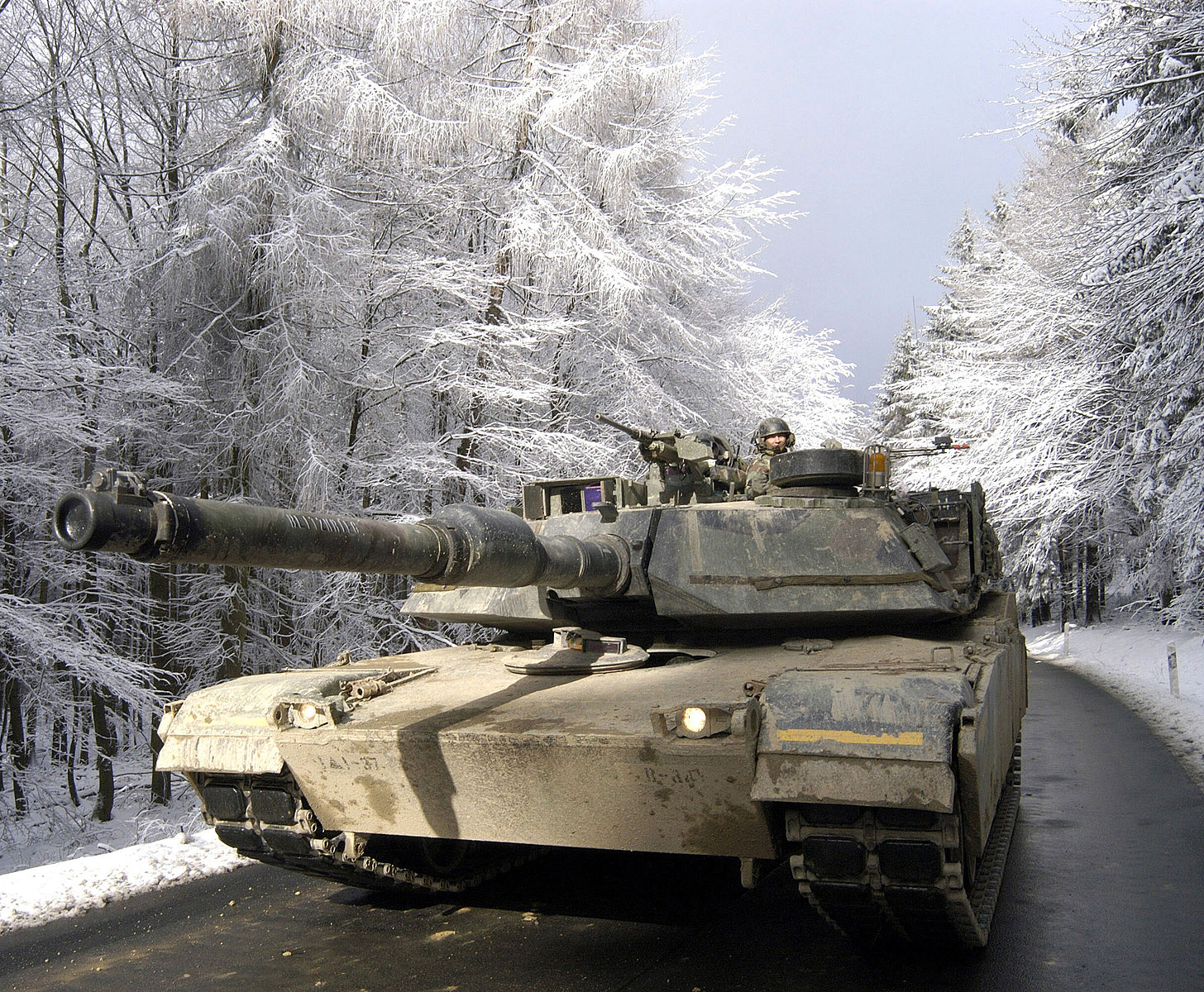 Specifically, it's the front of an M1 Abrams main battle tank. You're looking at armor that can shrug off a massive amount of damage. What about the back? 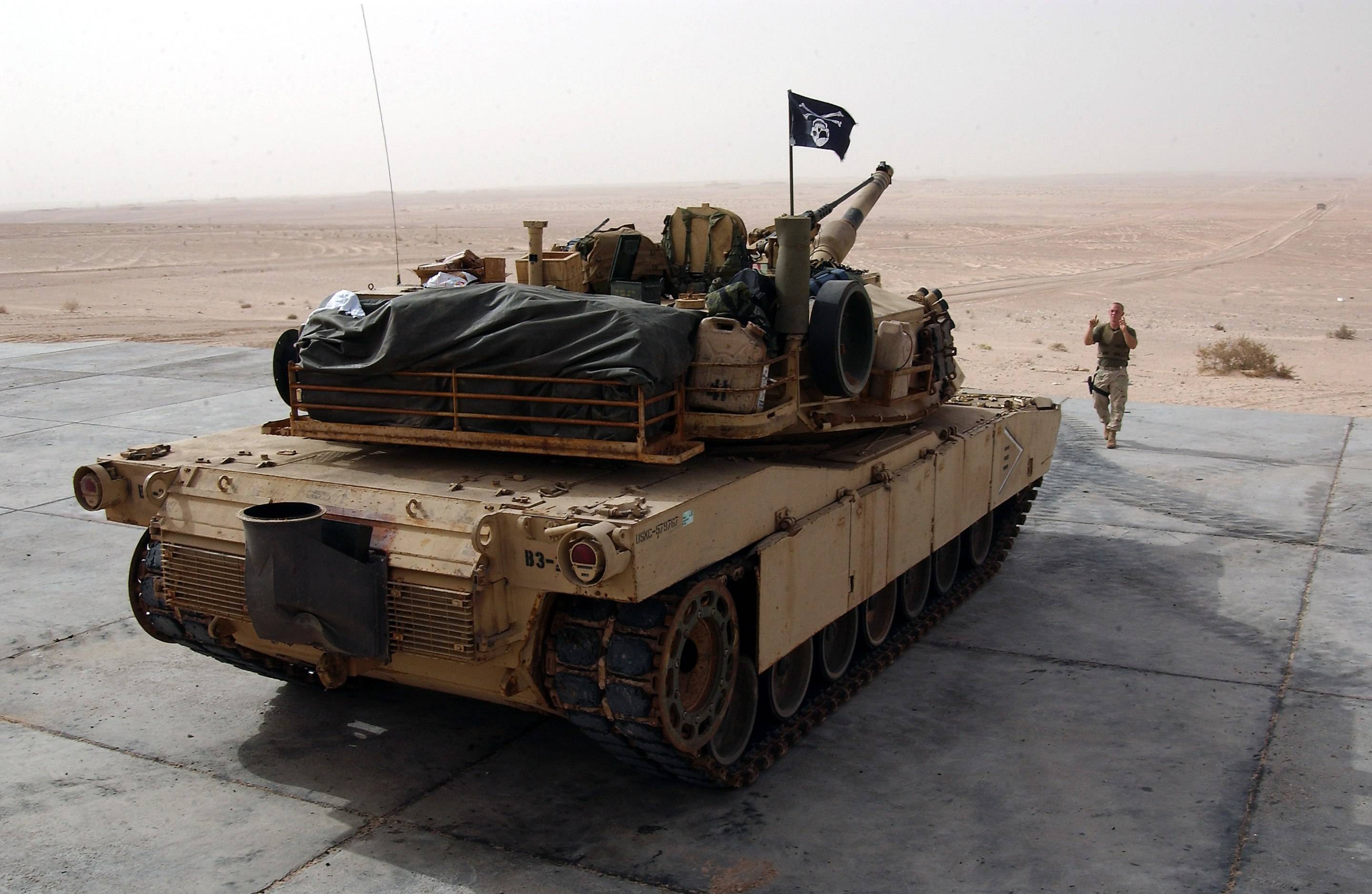 I still wouldn't recommend trying to attack an M1 from behind, but there's a lot less armor there. Weapons that would barely make a dent on the front could disable the tank from behind. As Wikipedia (the source of these images) puts it, "Similar to most other main battle tanks, the M1 Abrams feature composite armor only on the frontal aspect of the hull."

Why not put the giganto-armor all around the tank? Two reasons. For starters, it's just not practical to make the tank that much heavier. And secondly, tanks aren't supposed to turn their back on the enemy.

Soldiers in your superarmor could be trained to operate in squads of multiple people. Each suit's non-invincible weak spot could be located in a different place and each squad could work in a formation where they protect each other's ports. For example, a team of four could move in a box formation with each port on the inside of the box. And you could put all sensors outside of each suit, requiring only a small data port to receive information. No need for a visor if you can put a TV screen in each helmet powered by external cameras. You'd basically end up with a vulnerable area the size of an astronaut's umbilicus connection. 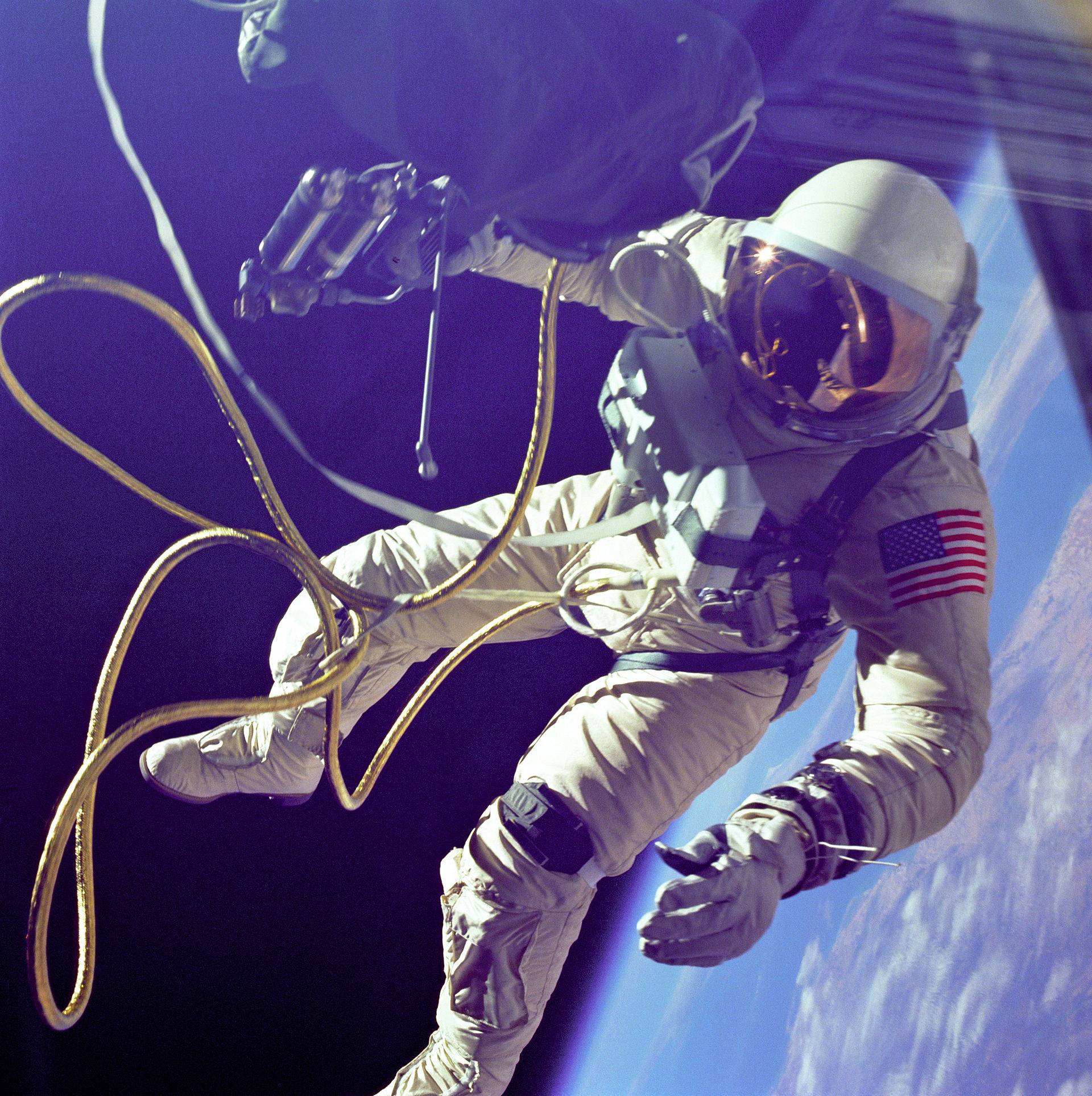 You are trying to solve a problem sci-fi writers haven't had much success with for many decades. But since you already have unobtainium, why not add a second, related kind of unobtainium specifically to protect sensors?

First, make it transparent. This isn't much of a stretch, there are some incredibly strong transparent materials in reality. Putting a transparent plate in front of your sensors will keep them safe from anything physical.

But since it's transparent, what about lasers? That's where the photochromic part comes in. You know the special glasses that get dark when you go outside into bright sun? The real thing takes a minute to get dark and most definitely won't protect against a laser, but if your transparent unobtainium can become opaque the instant any strong light hits and then quickly become clear again, your sensors are now safe.

This should be enough for the usual kinds of sensors - cameras are the obvious ones, but radars will work just fine as long as the special unobtainium is transparent to radar frequencies too. Other more specialised sensors for data such as sound, air composition, or barometric pressure may be more hampered by the armour though, and you may need to look for some exotic alternatives if you plan to include these in the suits.

Not the answer you're looking for? Browse other questions tagged warfare armors or ask your own question.

18
Advantages of armour when fighting zombies
7
How to make nuclear armour?
57
Would a fighter pilot with an invincible space ship be able to conquer the galaxy?
5
Would frictionless armour work?
8
How would medieval combat differ if its arms and armour were refashioned today?
11
Fire Resistant Armour for a Medieval Era Like Setting
15
Why Choose Less Effective Armour Types?
45
How would armour (and combat) change if the fighter didn't need to actually wear it?
5
Designing “Invincible” Armour?