Creating a Predator For Snappers

Yep, it's another predator question. I know lots of animals eat fish, but the Snapper is a different breed of deadly animal, a ferocious, amphibious pirahna with dagger-hard teeth and the ability to straight-up eat a much larger animal despite their size. (Imagine the typical American bullfrog jumping into your face, engulfing your head, and then proceeding to grow as they engulf the rest of you. That's a Snapper.)

Besides that, Snappers have the ferocity of a wolverine (the animal, not the OP superhero) and generally react to being eaten by eating their way out of the offender and proceeding to attack and devour them. Because of this, obviously it's gonna take a different breed of predator to prey on Snappers. By the way, Snappers start out the size of an American bullfrog but grow to the size of a Oceanic Whitetip shark and are ovoviviparous.

However, I'm having a hard time evaluating potential Snapper predators. My current candidates would be:

Besides, for the mermaids, it's either eat the Snappers or be eaten by them, and they'd much prefer the latter. (Unless they're dying; dying mermaids prefer to find a Snapper and let it eat them so then their loved ones can eat that much larger Snapper, for some weird reason). It's so much easier to socialize with adventurers and so forth when one is Amphibious, and after accumulating enough Amphibiousness, they can easily swim through (and float in) air just like they do in water. It's perfect for them!

However, I'm having trouble deciding on just what would be the ideal Snapper predator. So, my question is What Would Serve As The Best Predator (Or Predators) For Snappers? 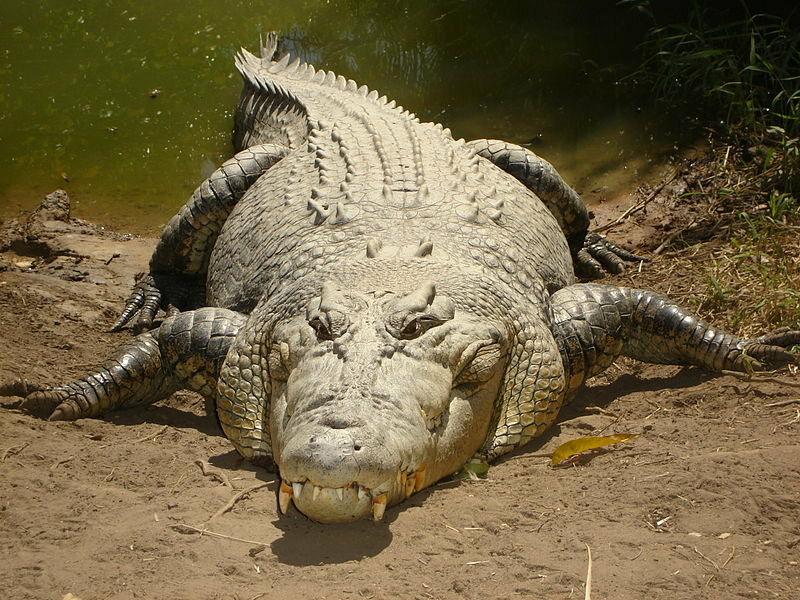 Salties which have been recorded as growing to length exceeding 6 meters are highly efficient apex predators and dominate their particular environmental niche (or at least they used to).

The point is as adults they have few natural predators. Oh, the males are highly territorial and will try to kill/drive off other males who enter those territories but as adults, they pretty much have no predators - except other crocs while small. And the same is true of most Apex predators in any environment - only other members of their own species are a threat once they are fully grown. Now you could make salties (or a fresh water version of them) your 'go to' predator for your 'Snappers' but the thing is you don't need to.

This is because, using crocs as a template predation occurs almost totally during the egg to juvenile stage of development. As a result most salties never reach maturity with something like 99% of all juvenile crocs being killed off. So in this case any garden variety predator able to eat juvenile snappers' will do the trick, snakes and reptiles, larger fish, birds of prey, otters, cats, raccoons in fact any small to medium sized mammal will suffice. Add in the fact that (like crocs) adult snappers aren't adverse to snacking on smaller juveniles plus the odd bad breeding season (e.g. poor weather or some such) and a disease or two? Your population is reduced without the need for another, bigger apex 'monster'.

Since they spawn in the water, the best predator is going to be at least semi-aquatic.

As you repeatedly mention them jumping and latching onto heads to begin eating their prey, I think it makes sense that they have an instinctual urge to hunt by attacking a creature's head, so whatever creature is their primary predator will need some kind of defense against such attacks.

To keep the population in check, your primary predator would have to be a larger predator or one that reproduces at a similar rate.

From your list, my first thought is the majestic Croc, but they are extremely vulnerable to having their jaws closed and would be helpless if a snapper attacks them first. The same goes for a python, who would have little chance of escaping once a snapper latches onto them.

My money, then, is on the mighty Hippo. Hippos are not only vicious when threatened (or just plain hungry), they are HUGE durable creatures that would be difficult for a snapper (or even a swarm of snappers) to consume. Their jaws also lack the muscle flaws in crocodiles and pythons which would make them extremely vulnerable to snapper attacks. Whereas a croc or python wouldn't be able to open its mouth after being swallowed, a hippo should be plenty strong enough to break the grip of the snapper with only its jaws and then suck it up like a candy.

If any of the predators on your list get the drop on a snapper, the snapper will surely die. I would say that only the Hippo stands better than even odds of surviving being ambushed by a snapper. A snapper might latch onto the Hippo and start trying to eat it, but the Hippo is big and durable enough that it would probably survive long enough to crush the snapper and treat itself to a well-earned snack. 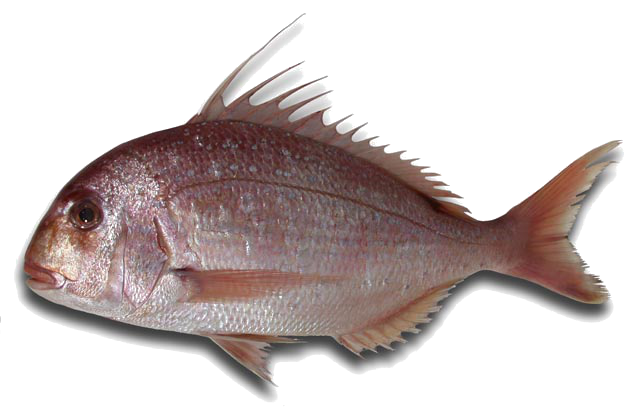 The main predator is a fish with poisonous spines. When the snapper attempts to snap the fish, he raises his spines which (a) interrupts the snap and (b) injects venom. The snapper dies shortly after this and the mowhawk fish eats the corpse.

Review of your Ideas:

Since the snapper can magically enlarge to fit anything in its mouth, the predator needs to be able to quickly disable it, and only eat the snapper after it is dead. Ambush, superior size/strength and venom are good ideas.

Many of your predators have vastly different habitats. Consider where snappers can be found.

Octopus -- they tend to stick to the ocean floor and attack by ambush. Only works if the snappers live there too. Ambush the snapper, wrap it up to prevent it eating you, and then eat it until it dies.

Water Scorpions (extinct) -- again they spend most of their time on the ocean floor. Poison and ambush is good. Sting and or hold in pincers until it dies.

Pythons -- mostly live in fresh water rivers. Ambushing from a murky riverbed would work. You are much bigger than a snapper so try to kill with the initial strike.

Hippo: Lives in African Savannah. Only eats grass so wouldn't work as a "predator". Also doesn't know how to ambush since it only eats grass. Good at killing big things like lions and crocodiles. Less talented at killing small things like fish that sneak up on you from below, swallow your leg, and then the rest of you.

Gar: Replace with "any large fast fish that can kill the snapper with its bite"

Bobbit worms: Similar to octupus. Bonus points for being able to retreat underground and become un-swallowable.

Mantis Shrimp: Quite small and stays near the ocean floor. Strike range is very short. Typically eats crabs rather than fish (I think).

Jellyfish: Could certainly kill a snapper but, correct me if I'm wrong, they typically only eat small things.

Baleen Whales: Wouldn't the snapper just eat its way out of the whale?

Humans: Fishing from a boat makes you safe from swallowing. The best time to catch a snapper is after it has swallowed something much larger than itself. Then they float to the surface and go asleep for a few days and can be killed with spears.

Mermaids: I suggest a large decoy fish that the snapper swallows whole. While it is bloated and sleepy you stab it in the head and repeat.

Pistol Shrimp: Related to Mantis Shrimp, Pistol Shrimp have an unusual hunting mechanism. They snap and their prey dies. Unlike Thanos, the prey doesn't turn to dust but rather is killed by the shockwave produced by the snap collapsing an air bubble. The resulting shockwave achieves speeds of 100 mph, which is fatal to most small fish in the water, instantly killing them. The sound produced is so loud that the pistol shrimp is in a competitive running with the much larger blue whales for loudest natural sound produced by an animal. It could easily down your "Snapper" before it could eat the shrimp or know it was around.

It's the predator that snaps back. 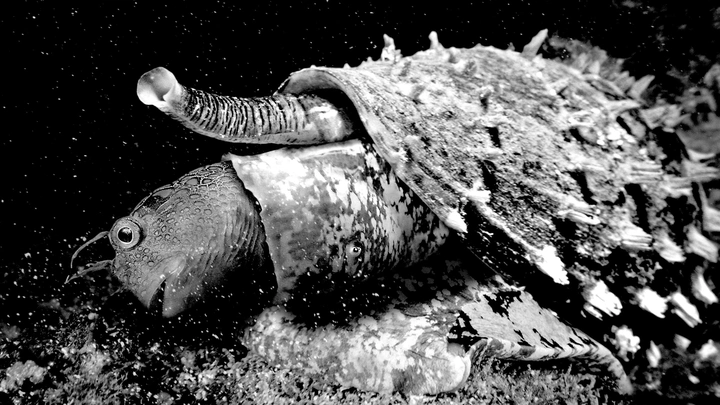 This sort of snail is quite nasty.

First, it has a snapper-proof thick spiky armoured shell.

It also has a long tentacle with a venomous spear at the tip to catch and kill any fish which would be taking a nap on the bottom of the pond while digesting.

Not the answer you're looking for? Browse other questions tagged biology mythical-creatures low-fantasy .