Had this idea for a rapid space fighter deployment system and wanted to see if anybody sees a flaw I'm not.

Imagine a big circle in space, and inside that circle are 'stacks' of space fighters facing the outside of the circle. Of course they wouldn't be perfectly stacked as it's a circle, and would be arranged more like the dots on this shower drain. The sides of this circle are closed with armor and have the fighter racks mounted on them. The circumference of the circle have segmented doors on them that slide open similar to the hangar doors on Venator cruisers. Larger circles can have two 'stacks' of fighters next to each other, or even more but the width of the circle increases with the stacks, and radius increases with the size of the stacks.

Movement is accomplished by two large engines on either side of the ring facing forward. These can be rotated 360* if needed.

For deployment, the circle inside begins spinning to generate artificial gravity. Once the desired door segments are opened, the fighters are released and they 'fall' out towards the battle. The outside door segements have rockets mounted opposite of the direction the circle is spinning to keep the door alignment from shifting and sending fighters the wrong way.

For rapid deployment, all doors are opened and the circle is oriented so that the side is facing the battle. This makes it a large target to hit, but all fighters can be launched very quickly. Safer yet slower deployment opens one 'side' of the circle(maybe a sixth of all door segements) facing the battle and launches fighters from the opening. This makes the target area a thin rectangle rather than a large circle, but deployment takes longer.

If technology permits, a single segment can open and a warp gate(or other instantaneous long distance travel device) can be placed in front where the fighters exit. Now the target area is much smaller and the fighters are deployed across much longer distances. Deployment rings built for this would probably have a spiral interior rather than a stacked interior to simplify the deployment(Stacked rings need to time the fighter release else they crash into each other at the opening, smaller opening needs more precise timing).

Question: Is this feasible, or am I missing something big that needs to be addressed?

If space fighters make sense, then so does this

Ok, so before everyone jumps in here and starts shouting about how space fighters don't make sense, I'm just going to assume that for some reason they do make sense and you want to have a bunch of snub fighters in space like a classic space opera.

Your launch mechanism should technically work, with one caveat:

Your ship is always spinning

It takes an incredible amount of energy to start a ship spinning from a dead stop, so your ship should always be spinning in order to make this work. Presuming your fighters have human pilots, they would live on a level "above" the stacks of ships and sit closer to the center of the disk (which would probably be a ring and not a disk).

They should climb down into their ships (which will experience a slightly increased amount of artificial gravity), and then the bay doors would open to drop them out as necessary.

Of note, this ring (or disk if you're really set on a disk) would have to be at minimum 200m in diameter (and possibly much larger) to prevent issues with seasickness in the crew from the constant rotation (estimates expect that a rotating ring providing artificial gravity would need to maintain below 1-3 RPMs).

This is how I picture your design: 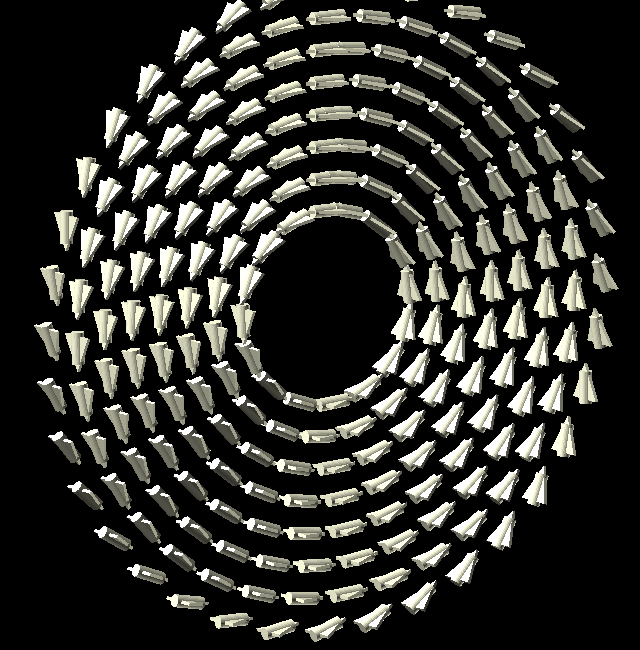 I think this is plausible assuming the fighters and space ship holding them are. Two thoughts:

Spinning up a station "just" to launch ships (fighters, crusers doesn't matter here) is very energy intensive and you have to slow down after.

It would be cheaper to just accelerate the lighter object. This means you could rapidly deploy fighters rather than taking the time to spin up a lot of mass just to throw out the fighters.

Keeping it spinning on the other hand is somewhat trivial and if part of the station is for human habitation then you get gravity for free but you will only be able to launch your fighters at about 1G of acceleration (else you would be crushing your humans on the rest of the station.

Not the answer you're looking for? Browse other questions tagged science-based space spaceships or ask your own question.

37
What would a space fighter look like?
57
Would a fighter pilot with an invincible space ship be able to conquer the galaxy?
10
Is my space station feasible?
7
Is an artificial gravity room on a modern spacecraft or space station feasible?
14
Orienting a pilot inside a space fighter
1
How to Defend Damaged Space Ships from Raiders
17
Why should humans kill this space creature?