What would be an effective land based mode of transportation for mermaids?

unlike their giant counterparts, most mermaids are more humanoid sized and have a life style similar to seals. now some of these mermaids occasionally make the voyage to land cities and they can scuffle across the ground similar to sea lions it's relatively slow and exhausting and due to their seal like hind limbs i doubt they could mount a horse easily. so given all this with medieval level technology what would be an effective land based mode of transportation for mermaids?

Note: Magic does not exist in my story

If the mermaids can survive an extended period out of the water then sling some hammocks across the interior of a wagon. They can ride in what is probably the most comfortable position for a mermaid on dry land.. lying down.

The humans could provide buckets of water and rags or sponges so the mermaids can moisten themselves if needed during the day. At night they camp by a lake or river.

For most things a sort of Sedan chair or litter would be the preferred mode of overland transport. Swim upriver until you reach your destination city/town, hire a litter from the docks, and get quickly carried to your destination. This would be especially good if your merpeople are comfortable in a "sitting" position and if they don't require frequent re-hydrating. It becomes a little less feasible if lying down is their only comfortable way of being on land. It'd make the litter longer and a bit less maneuverable, but I don't think it would be a huge deal.

For longer trips (town-to-town say) you'd probably have to go with some sort of draft animal pulled cart. I say this under the assumption that your merpeople would need to spend at least some time every day in water to be truly comfortable. So you wouldn't just be hauling the merperson and their baggage, you'd also have to haul what amounts to a large kiddie pool around as well. Apart from Very Important Merpersons I don't see these being used in cities, or indeed in most towns. They'd need to be custom built to hold the water and it just wouldn't behoove people in a medieval setting to make them because a merperson can get almost everywhere worthwhile by swimming. Almost all major medieval cities and most towns/villages would be situated near bodies of water that would eventually make their way to the sea, so merpeople would likely just swim/use whatever seaborne transport they normally use. But for some locations I could see water-wagons being used to ferry Merpeople from one town to another, or more likely one body of water to another. (think across mountains from one set of rivers to another, or from the ocean overland to a lake if the river is very winding.)

The one exception to using rivers/streams I can think of is if a particular river/stream had a really strong current, or in places where rapids would make it impractical. For strong currents I know what they did for barges is have oxen on the banks drag the barges upstream, and I could see merpeople getting on the barges to be "towed" across areas where the current would make swimming to tiring/impossible. Rapids on highly-trafficked waterways would probably end up with sedan-chair portages similar to the city versions.

As an aside, for countries that did a lot of business with or had strong alliances with merpersons I could envision canals being dug specifically for merpersons. It would be an extension of Imperial Highway building. Heck, you might even see canals dug specifically to facilitate ambassadors which run directly from the docks to the Palace, which itself has various waterways so that a Merperson royal or ambassador would never have to condescend to being carried by humans or flopping along by themselves! But they would have to be VERY closely bound politically/economically, otherwise the expenditure might not be worth it.

Most Merfolk will Travel Using Crutches

There are a lot of answers here based on what merfolk of considerable wealth could choose from, but the idea of persons of normal means owning any sort of vehicles is a pretty new concept.

Instead, consider that merfolk are basically no different on land than a 1-legged human. The use of wooden crutches as a means for 1-legged people getting around goes back to atleast 2830 BC; so, it's not hard to imagine them being interjected into almost any setting. With conditioning, it is very much possible to travel over 10 miles in a day on them which means that a reasonably fit merperson could travel just as far on them as a commoner would ever realistically be expected to walk in a day.

Furthermore, crutches do not require you to transition between modes of travel. A Merperson, could come out of the water, travel the few miles it takes to get into town, and "walk" right into the building they were going to.

This answer applies to mermaids as described by the OP, not all versions of mermaids.

(they) have a life style similar to seals... they can scuffle across the ground similar to sea lions... (they have) fused thighs...

Len brings up a few good points in comments that would apply to a mermaid with a literal fish tail, but these mermaids by their description appear to be aquatic mammals and not fish at all.

When you look at the tails of aquatic mammals like seals, sea lions, dolphins, or whales, they bend in the dorsal/ventral direction like human legs, not in the side-to-side fashion of a fish tail. More ovever, since the OP describes the tail as fused leg bones, and not an extension of the spine, this further implies that the OP's mermaids are most likely a viable evolutionary branch of the sirenomelia mutation. Survivors of sirenomelia who have had their legs surgically separated are proven to be able to walk on their legs; so, to have a tail made of two legs fused together would likewise be able to support one's weight when standing. It can also be assumed that the "fin" at the back is much thicker and "foot like" than a fish's tail fin as you see on aquatic mammals or people with sirenomelia. Worst case scenario, your mermaid will need some kind of shoe to prevent abrasions while it walks, but human commoners already wair shoes all the time, so this is a pretty reasonable expectation in addition to the crutches

As for concerns about needing to stay wet, seals and sea lions can live indefinitely out of water. In captivity, injured seals are often kept out of water for months at a time as their injuries heal; so, if these merfolk have seal like lifestyles, this means any answer that mentions keeping the mermaid wet is unnecessary.

What about those scales?

While we generally expect to see merfolk with scaly tails, no one ever said those scales belong to the mermaid. They could wear fish leather tail coverings which would have a similar function to all-in-one pants and shoes while further perpetuating the "half-fish" misconception by showing off a scally lower half. In reality, their lower half could actually be more like a dolphin or seal tail.

Just use a wheelchair, it's the best solution for people who cannot use their legs in urban environments. If something more robust is needed then a larger motorised or animal drawn one.

Airports and seaports have wheelchairs.

No need to reinvent the wheel on this one.

As I kid I used to make my own little swimming pool by just filling a wheelbarrow with water. When my cousins wanted to play, we just moved around in a "movable swimming pool".

Scale it up to the size of an adult, have some beast of burden or humans moving it, add some more wheels for better holding the load, and you have your transportation for mermaid, with the added benefit that can keep them hydrated along the trip.

This will leave the mermaid to scuffle only the last part of the travel, where the carriage won't fit, like the business premises that they are visiting.

If mermaids co-exist in the world with humans, I would suggest chartering a ride. Mermaids must have something of value they could barter for transportation.

This could be lucrative for the humans, with luxury wet transportation, or economy dry transportation. Humans would build ramps into the ocean making it easier for mermaids to access their rides. Humans would compete for access to the mermaid customers, and the valuable goods they would offer for a ride.

Eventually, it would become standardized. One token of value for one unit of transport. The market would prevail, and would offer problems to be solved related to all the common economic disruptions.

They can use side saddles. 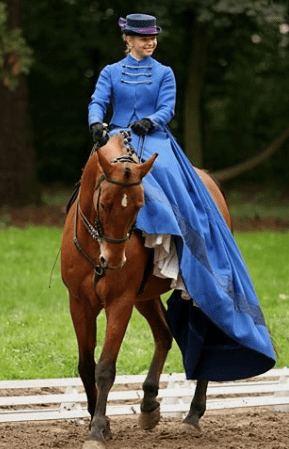 Of course these saddles are not as convenient as normal saddles, but they do the job.

Or, if mermaid's tail can get rigid, she can move on land almost naturally.

Not the answer you're looking for? Browse other questions tagged medieval fantasy-races transportation merfolk vehicles .

28
How could medieval ships protect themselves from giant mermaids?
11
Realistic sea humanoids