How to steal a stadium full of melted cheese? [closed]

The situation is simple: There is a stadium filled to the brim with a liquid lake of boiling hot melted cheese. You want all the cheese. It's a 10-acre stadium, with a height of 166 feet, and a seating capacity of 102,780. The stadium is under minimal guard, but there is a flotilla of four SWAT helicopters overhead that are slowly lowering a 50-foot tortilla chip into this lake of deliciousness. Probably some snipers.

Under these conditions, how do you successfully extract all of the melted cheese and make your escape with it? Bonus points if you complete your heist before the cheese cools, and extra bonus points if you can get away with the chip, as well.

EDIT: Your assets are a blimp, two goons who will do whatever you tell them, 5 million USD, and a tanker truck. You have two weeks to prepare, but only one day to seize this glorious opportunity. Real-world physics apply (the tortilla chip is reinforced with steel).

This is literally the most stupid, expensive, risky, silly, brave, dangerous, and glorious way to steal some cheddar.

Wait? What? How? The helicopters, even all 15 of them + six cranes only equals 960,000 pounds. You also add military and other vehicles to pull it. Even then, you're not getting close to 80,000,000 pounds. You inject more helium into the cheese. You call in more helicopters. You use the blimp. You threaten the city government to provide more people. You steal cranes from the port. You squeeze water out of the cheese. You start to build a ramp from the stadium to the ship. You do whatever it takes, and finally, you load 80,000,000 of cheese onto the ship. And you do it again.... and again.... and again.... 12 times more in fact.

It only took all your money, resources, and helicopters - and made you the most wanted man in America.

You do not mention detail about the owners of this cheese or why they are engaged in this endeavor. I here assert that it is an art project. Once the project is done they will be glad to wash their hands of the whole deal and move on to other artistic projects. You can have the cheese for $10 and rent the stadium for a week for less than a million.

Now you own the cheese and the chip and you are renting the stadium. Your goons fly the blimp advertising free cheese and the people come and devour it in a most unhygienic fashion.

You will need to pay another million to clean up the stadium in time for bocci ball season.

Now with remaining money you run for mayor as the free cheese guy.

You steal it without moving it

Steal the whole stadium in situ.

Use the 5 million to buy or otherwise obtain a weapon of mass destruction. Threaten the local populace with a massive explosion of boiling cheese if they don't let you keep the stadium and the cheese. That way you still have the heating unit in place and can keep the cheese melted indefinitely.

Supervillains always use WMDs and threats of widespread destruction if they can.

First, fill another stadium with something that looks like cheese but isn't.

Drain it through the sewers

I'm not even kidding. Just use the money to clear the area and the path that you want to take. Use the 5 million us dollars to buy trucks at the other end. Just drain it through the sewers. Friction caused by the movement of the cheese should sustain it to a degree, as would the high fluid pressure. You never said you wanted it to be edible. As chasly - supports Monica pointed out it would harden. So you mine it. And THEN transport it to the trucks.

How is the cheese getting the heat to be molten anyways? Does it contain irradiated dust? Cancer cheese. Mmm...

Because the stadium is filled with cheese, we could assume, that all openings are closed, except the top, where the helicopters with the chip are.

Be the great hero, who have enough cheese to fill the stadium again (maybe for free?) to save the day! And while they think, you bring the cheese, you will in reality take it. (I would recommend to use cleaned oil-tanker for transportation and heated pipes to the stadium. But because it was already filled, you could also use the same method than the others before...) 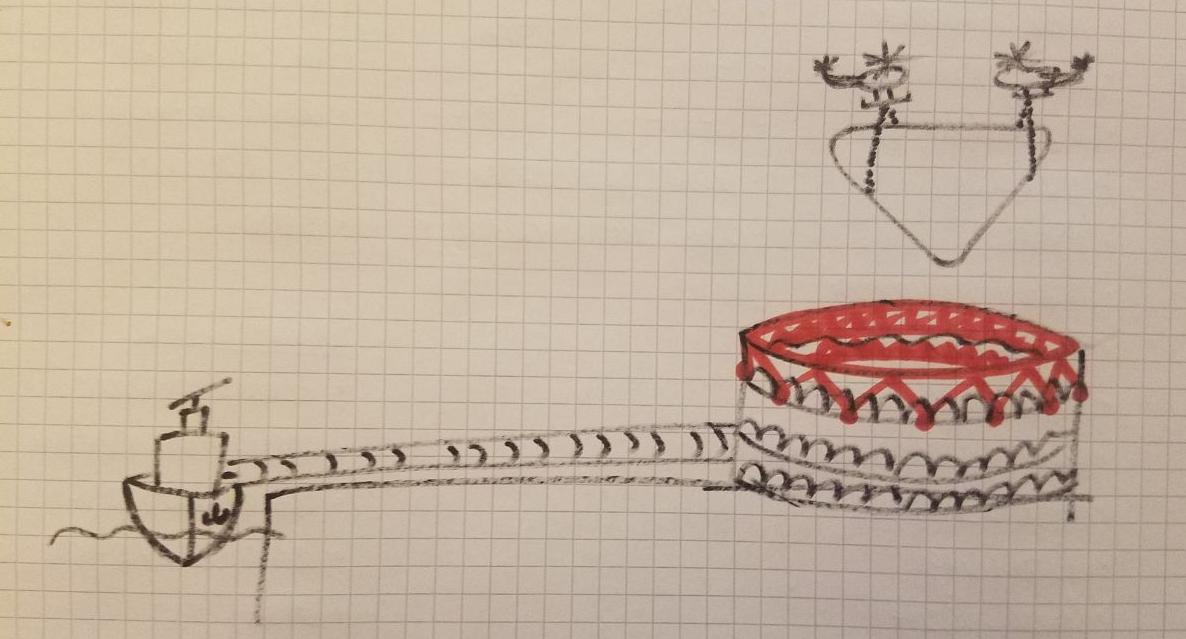 You could use a "water bomber" plane that scoops up the hot liquid cheese and then releases it into another "bowl" of your choosing. See the following video for reference:

With such a crazy hypothetical, there is no WAY Cthulhu is not involved. He shares the first letter of his name with cheese, and to eldritch monstrosities, that is a big deal!

Thus, if one agrees to spend 5 million USD to do goofy things (or maybe just launch a company called Cheesy Chthulhu, which sells strange but good cheesy foods) chances are you could gain a Potion of Giant Size from Chthulhu (plus a bag of chips that will grow with you), drink it, and proceed to walk to the stadium, take the chips, dip them, and eat them. Mmmm....

Oh, and for the cheese that will undoubtedly be left after your nacho binge (personal experience tells me you can never get all the cheese, no matter how hard you try, especially in a place with as many nooks and crannies as a giant stadium), you should really pay five million supermodels dressed as mermaids to lick up all that cheesy goodness. (Trust me, Cthulhu will make this hypothetical real if you sign a contract promising to make it happen.)

Not the answer you're looking for? Browse other questions tagged supervillain .

11
How powerful could a person with superpowers/group of superhumans be without greatly affecting world history?