What could be the the consequences in this world if nuclear bombs didn't release radiation anymore?

In an alternative earth, or just a few decades from now, someone was able to make a breakthrough in nuclear bombs. Developing a way to make the radiation be nullified by its extreme chain reactions or just dissipate it so quickly that the exposure to the fallout is almost inoffensive).

The today's world accord on thermonuclear weapons ban is basically done due to the cheer amount of destruction and post-destruction the blast and the fallout would cause. A literal apocalypse that would cover the skies in ashes and lethal radiation.

But, the second isn't a problem anymore in this scenario. Thermonuclear bombs are now "safe" to use.

I know that even though they don't kill everyone with the fallout, they still have the potential to send the entire civilisation back to the iron age. After all, we have a pretty delicate infrastructure in the entire world, and so, these would be the first targets of any country. And the resources available are only obtainable using modern technology.

So, taking those things in consideration, do you think this pact of non nuclear aggression would still be applied, or they would just press the button and send everything to hell?

The answer probably isn't as exciting as you'd hope.

The world pretty much as it is now.

Military generals have wanted the real-life answer to this question. As such, they commissioned military scientists to create exactly this.

The result: The Thermobaric bomb. It gives an explosion just shy of a small nuke but a cluster of 20 of the FOAB (Russia's biggest Thermobaric) would yeild a 1 kiloton blast. (Even 1 FOAB forms the beginnings of a mushroom cloud.) That means the Thermobaric is capable of destruction that can compare to a nuclear blast. On the flip side, they can be reduced in size to a very small size as well.

Thermobarics are generally used at smaller than their max size. This is because militaries prefer surgical strikes rather than massive strikes. (Testing the latter is good for intimidation, but that's about it.) Because, as far as pure destructive force, like nukes, there's enough thermobaric weaponry to render Earth unlivable. We just don't use it because the Earth can only sustain so many blasts before our atmosphere becomes deadly from just the dust. So the amount of explosions in the world has to be fairly limited to keep humanity alive.

To put in a different perspective: Earth and humanity all together acts as one super-organism. And you can only hit yourself with a crowbar so much before you die.Sure, if your leg needs amputated, that's worth considering, but using amputation each time you get an itch is a short-path to death.

If they were clean, nukes would be used for construction. Dams could be built, rivers relocated, mountain passes created. 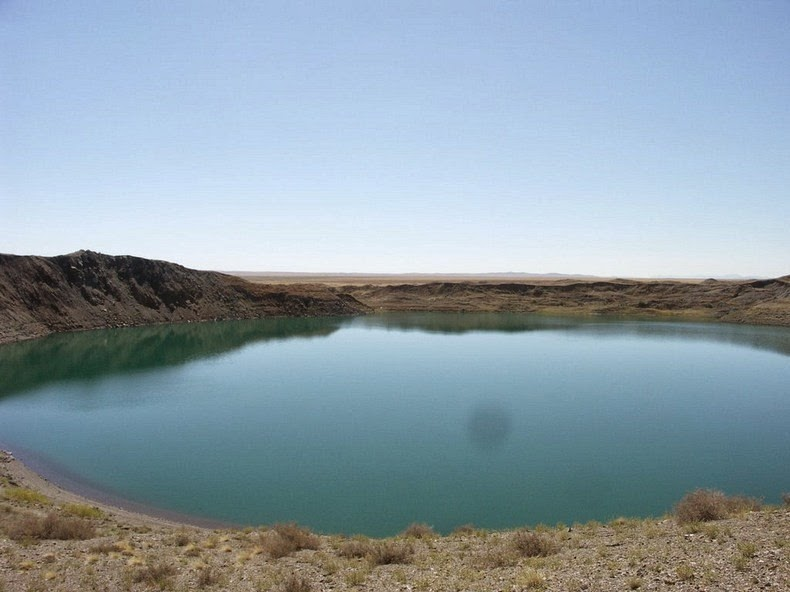 Lake Chagan was created by the Soviet Union using nukes for this purpose but the radiation wasn't understood properly and they got left with a lake nobody can use. A politician who claimed it was safe went for a swim in it and died of cancer a few years later.

Everyone declares war on everyone else.

All jokes aside, ultimately clean nukes probably won't change the equation much.

Without the possibility of turning the world into a radioactive wasteland, it would seem like the use of nuclear weapons would become more politically acceptable, but...

Thermonuclear weapons are actually extremely clean (relatively speaking) and won't generate radioactive fallout if the fireball doesn't touch the ground. The Tsar Bomba test was actually one of the cleanest nuclear weapons ever detonated (that of course would change if it was detonated at its full 100 MT design yield).

Purely clean fusion bombs that don't use a fission primary are a theoretical possibility and have been researched heavily, but there are still engineering challenges that remain. Most theories involve muon catalysts or explosive pumped magnetic fields to compress the fusion fuel.

If the USA, Russia, or China did succeed in creating such a clean weapon, it's unlikely they would be public about it to avoid triggering an arms race or create tensions that could lead to a preemptive attack (after all, radioactive fallout is the main political problem surrounding nuclear weapons, even if it is a red herring).

But at the end of the day, it's unlikely that even if all sides knew of and had these clean nukes that things would change for one simple reason: Mutually Assured Destruction.

MAD actually works quite well when state actors are rational, as is clearly shown from the Cold War's lack of an actual nuclear conflict. Clean nuclear weapons are still devastating nuclear weapons, and a full on assault between two nations would still leave them in tatters within minutes, so the deterrent effect, which is what nukes are really designed for, remains, even if the nukes are clean.

However, what is a more dangerous proposition is if all nuclear weapons were magically removed from the planet. This is the true "Everyone declares war on everyone else" situation, as it returns us to a situation where wars between great powers become winnable.

The USA, Russia, and China would be far more likely to get into a conventional war knowing there was no possibility for it to go nuclear. Similarly, smaller states without nuclear weapons might be more tempted to take on larger states with them, knowing that the possibility of mass casualties from nuclear attack no longer exist.

Ultimately, it is the destructive capability over time states can bring on each other that acts as a deterrent. This is very evident in the situation on the Korean peninsula. Even without nuclear weapons, the fact that Pyongyang can absolutely devastate Seoul with artillery attacks has been a major deterrent for action from the South and the USA for decades. The fact that North Korea has been able to produce nuclear weapons is more for allowing it to force concessions out of world powers (after all, you can ignore artillery on a border that is ineffective beyond 30 miles or so, but not the possession of deliverable nukes that can destroy cities on a global scale).

There is also the prestige of being a nuclear power, as evidenced by the joke: "What do you call a country with nuclear weapons?" "Sir."

The technology may or may not be applicable to conventional nuclear reactors since those rely on a controlled reaction and not an explosion, but if it is applicable, you build those too.

You're the author - what do you want to happen?

If you want the status quo of MAD to be maintained, stix's answer gives a good argument that it could be.

If your story needs a world without MAD clean nukes will be a good start, and with a few other elements in your alternative history you could come up with a plausible explanation.

There's quite a bit of cold war thinking asking whether you could have a "limited nuclear war" - which was an important question if, say, the Soviets invaded France with conventional forces that outnumber French forces ten-to-one. Could France use nuclear weapons only inside its own borders, or only against military targets within a certain distance, or only weapons of a certain size, without triggering the end of the world?

Their conclusion was 'maybe' - thankfully, they didn't test that.

What you need to do is remove the dividing line between small nuclear weapons and large conventional weapons.

This way, it'll be a lot harder for MAD to develop into a stable system: Instead of having a clear line ("any nuclear attack") the line would be much fuzzier - inviting both sides to test one another, edging nearer and nearer to destruction.

Nuclear fallout isn't the only reason MAD deterrence exists, the non-fallout related destruction caused by the explosion is immense on its own merits and would likely still prevent war-like engagements. The other factor to consider is the amount of power these capability gives nations the USA might not agree with on various terms (such as Iran and North Korea). It's likely the main reason these armaments are sought after by these nations is to be a power broker and as leverage against other nations. We don't use generally use our highest caliber weaponry now-a-days anyway. The nuke would still be a viable weapon without the fallout for any nation's arsenal. War is just another political / diplomatic tool. Another consideration is the type of energy negation we're talking about here... Fission bombs are different than fusion bombs and emit different types of radiation at different levels.

The radiation shielding has many useful applications:

The technology used for that might also have a dozen applications:

The science behind it might also have other tech uses, depending on how you explain it:

If you mean no radiation also removes the electromagnetic pulse (EMP), then that changes the entire equation for warfare. One is left with catastrophic blast damage but no direct effects outside the bombed area. Smaller nukes then start to look like big conventional explosions, and the threshold for using nukes would be reduced.

A recent article in the Bulletin for Atomic Scientist places the risk of nuclear war at about 1% per year. If you are young, that means you will be at a 50:50 chance by sometime in your later years. You would never know this from our journalists and news media. In their quest to "sell soap" they focus on sensational matters, most of which are trivial compared to nuclear war. Recall that the media was discussing Gary Hart's love boat when 911 occurred.

Your "no radiation" scenario probably would have meant that the Cuban Missile crisis would have gone off. We would have used small nukes in Vietnam. Someone might now take out the Iranian facilities. Your scenario is scary.

An interesting caveat is that some of the targets for your radiation free nukes would release radiation: nuclear power plants, isotope refinement facilities, etc.

1
What would be the long-term effects of nuclear war on the climate?
11
Could an object from space crash into Earth and set off a majority of the nuclear bombs created?
9
What situation would prompt the world to dump the use of Atomic and Nuclear Explosives entirely?
1
What would the global effects of a prolonged nuclear war at sea be?
3
Why do the nations in my world use tactical nuclear weapons but not strategic ones while still having both?
3
What if the 1993 World Trade Center bombing succeeded?