Can cold thrusters be improved for work in space

This belter got Mr.X thinking and it is a stroke of genius this time.

What do we do with all that oxygen we get when extracting metals from their oxides? we liquify and use them as a reactive mass of course.

ISP is something like 60 seconds, so if we take something like 40% by mass to be that oxygen in our canister, then delta-v is around 300 m/s - not a lot. So we do need some massdriver on the Moon - to kickstart the can in orbit, but it is enough to make a second Hohmann maneuver to circularise the orbit.

one of the problems of low ISP is the low temperature of exhaust - so why not use sunlight, mirrors, and Al2O3 heat pipes and do heat it to some 2100K - then it possible to squeeze maybe 800m/s delta-v - not huge but definitely an improvement.

Will it work that way?

so why not use sunlight, mirrors, and Al2O3 heat pipes and do heat

You will probably be unsurprised to hear that solar thermal rockets are things that people have thought about before. Most designs generally use hydrogen as the reaction mass because of all the lovely exhaust velocity (Isp as high as 900 seconds or more in some cases!) but a high-thrust, low-Isp oxygen-fuelled rocket could be useful in some circumstances.

The basic design is potentially quite versatile. Here's a splendid illustration I found on Project Rho, who got it from Nick Stevens who seems to do a load of nice spacecraft illustration work: 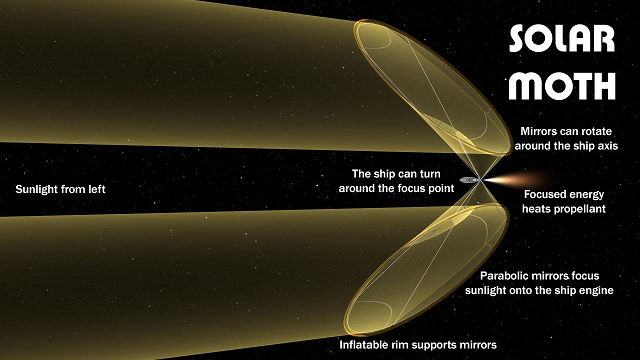 Remember that rockets that use highly oxidising reaction mass won't be able to run on reducing reaction mass (eg. hydrogen) when required (because they'll corrode horribly), so you're limited in the ultimate performance of your rockets. At least you can use something like carbon monoxide to get a tiny performance boost, when it is available.

Performance will of course be disappointing... if you look at the characteristic rocket velocity equation:

you'll see that because of the square root in there, O2 is only 4 times worse than H2, all else being equal, so you might get >200 seconds Isp, which isn't great given all the inconvenience of storing and handling cryogenic oxidisers.

Honestly, you'd be better off using water. Non-cryogenic, >300 seconds, readily available. Given how much water ice there's going to be out there, I feel like there's no particularly good reason for using O2 as reaction mass, but if you really felt the need I guess the option is available.

Not the answer you're looking for? Browse other questions tagged reality-check technology spaceships mining or ask your own question.

11
How would you slow down a large object traveling through space?
3
How fast could we build a Dyson Swarm?

11
How can a space "radar" work?
5
Plausible pseudo-scientific explanation for cold iron?
3
Permanent flag for space pirates
13
Preconditions for 'Classical' Space Fighters and Carriers
17
Is it necessary for spaceships to include reverse thrusters for deceleration in space?
5
How can space-mines be improved as a viable weapons in interplanetary space warefare?
7
How would the cold war continue- in space?