What would the lakes of a planet with larger glaciers look like?

** This question is making the assumption that if a planet with a similar size and atmosphere of Earth is colder and has longer nights, it will have larger and more numerous glaciers. If this is not true, pretty much skip the rest of the question below. **

Imagine a planet pretty much identical to Earth, except for the day/night length and temperature. A full rotation of the planet takes about 16 Earth days. Additionally, during an ice age tens of millions years ago, the planet was significantly colder than Earth was at the same time.

Combining the longer nights and the colder temperatures, I'd assume glaciers would form in larger groups than they did on Earth. Not only that, but there would also be more groups of glaciers.

What I do not know, however, is what that would do the modern-day lakes. For example, the Great Lakes in North America were formed by retreating glaciers. In the case of this fictional, colder world, would those lakes be deeper? Would there be more Great Lakes because there are more glaciers?

What would the lakes of a planet with larger and more numerous glaciers look like?

There would be bigger lakes in areas at lower latitudes.

Glaciers - yes, they dig lakes and yes they melt and fill lakes. All well and good. During the Ice Age, high latitude places that now have lakes would not have lakes, because there would be an ice sheet on top of them. Maybe there would be lakes underneath. It would be dark at those lakes and cottages would sell for cheap. You would have to duck while waterskiing.

Let us instead consider lakes that might exist in this cold world that would not exist if it were warmer. Western North America is dry now but it had big lakes in the glacier days. They were not because of glaciers. They were because it was cold. Lake Bonneville is a good example. It is now a lot smaller and is called the Great Salt Lake. 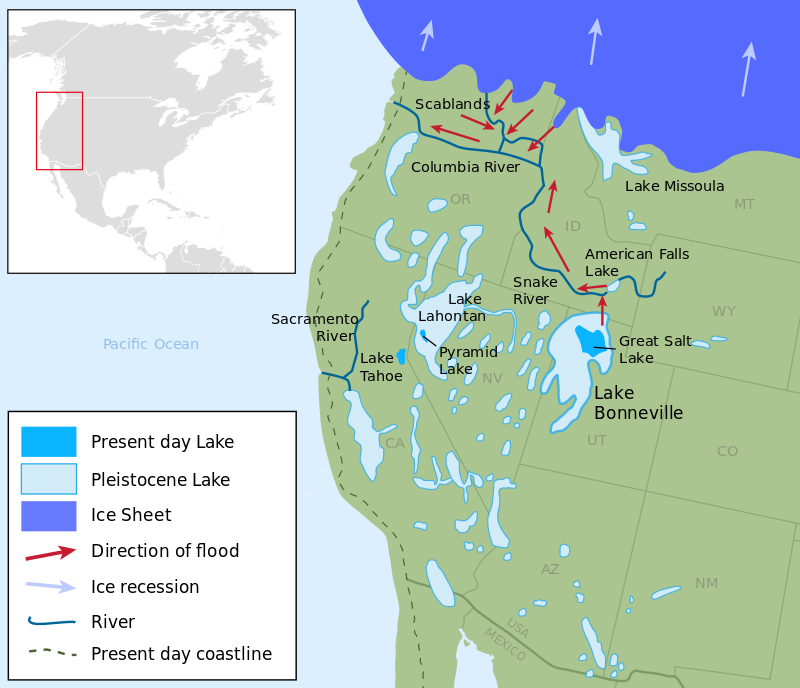 Lake Bonneville was not a lake because of glaciers, but because of the same global climate that produced glaciers at higher latitudes. It was not alone - there were other big lakes in the west that are now little salt lakes or dried up completely.

I think equivalent dry lakes / salt lakes for Europe / Asia would be bodies of water like the Caspian and other central asian lakes, and the lakes that were once in North Africa where the Sahara is now. Like Lake Bonneville, these used to be bigger back when glaciers roamed the earth, slowly. If there are dry lakes or salt lakes in Europe proper I don't know of them but maybe AlexP will weigh in with examples.

Not the answer you're looking for? Browse other questions tagged science-based geography alternate-worlds ice glaciers .

10
What would humans look like if their evolution had been slower?
3
Effect of 32 hour days?
12
What would a planet with no moon look like?
2
What would the average terraformable planets look like?
6
In what ways would the earth's orbit/atmosphere/ocean currents have to be different in order to create summer with long nights?
4
What would be the effects of replacing the Moon with an Earth-like planet?
5
Northern Great Lakes in an Alternate Island Africa--Would the Sahara DESERT Still be Around?
36
Would you notice, visually, if the planet you were on was vastly larger than Earth?