I was wondering after considering the trope of floating islands, genetically modified/genetically engineered plants that produce carbon nanotubes, which as a byproduct forming vacuum tubes as they grow. For context, the life cycle of the plant consists of perpetually growing until the buyout force becomes high enough to rip the plant out of the ground at which it disperses clusters of seeds, a bit like dandelion seeds, while the plant, still buoyant becomes composed of primarily extremely advanced material science compounds and standard biological substances, still buoyant, still drifting, even after it's dead, creating floating islands in the process. What base plant would be ideal for the heavy genetic engineering to create such a thing?

They, as a matter of fact, would be quite large as to account for the displacement of it's surroundings and itself.

Mangroves are known for salt tolerance, living at the edge of the sea. They are able to host nitrogen fixing microbes. As proper trees, they can be encouraged to grow up through the "ground level" of the island, obtaining solar energy from some height.

Proper nanotubes seem hard, but surely not impossible. My notion was Grignard proteins, the product of an amino acid that is an organomagnesium chloride. But perhaps C-C bond formation could better be done another way.

This answer is pretty much a frame challenge.

Your basing the lift for your plants off of vacuum balloons & they don't work because any material strong enough not to be crushed by the air pressure is too heavy to make an envelope from that won't counter all the lift from the vacuum within.

A material with the properties needed to make it work is the holy grail for this sort of thing & it just doesn't exist in nature.

So unless your relying on magic or have large quantities of handwavium in your world you'll have to accept the use of lighter than air gases instead.

If you do try to drop this into a story without magic to back it up I'd predict it will be soundly mocked.

Where you go from there depends on what was important to you, the vacuum balloon nanotubes or the floating islands?

If it's the nanotubes as vacuum balloons then you're at a dead end, the materials to make them pretty much belong in the same category as perpetual motion machines & mechanical antigravity from interrupted centripetal motion, but if it's floating islands you were really after then see below.

Hydrogen is the obvious gas of choice for this.

Easily made from water & plenty of bacteria produce it as a waste product.

It's flammability is going to be an issue but there's really no other choice, it's the only gas with adequate lift to make this even marginally plausible.

Its nearest competitor (helium) is a limited resource that can't be produced by any chemical or organic process.

So we might imagine something like a water hyacinth that produces hydrogen in its buoyancy nodules itself or has formed a partnership with a bacteria that does it for it. 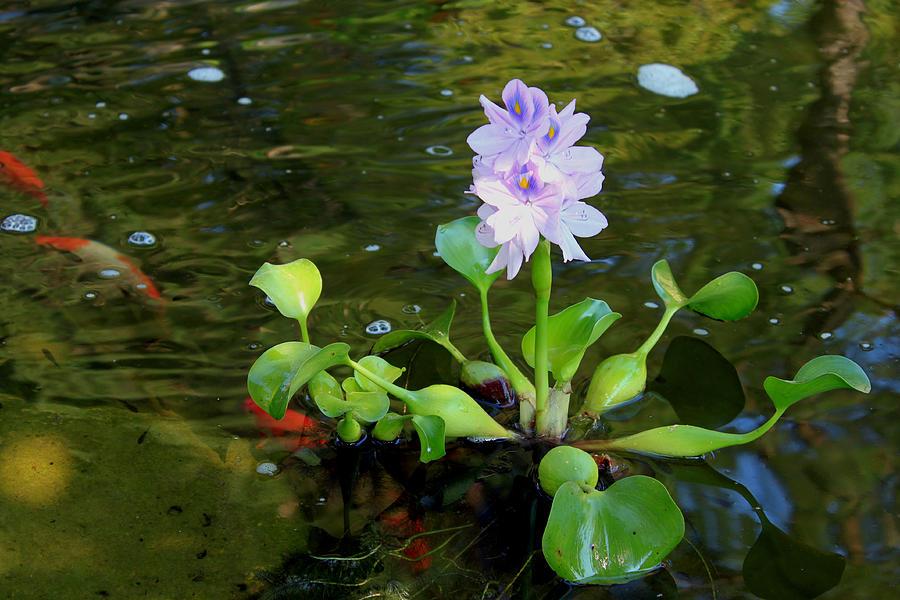 Sargassum is another potential candidate. 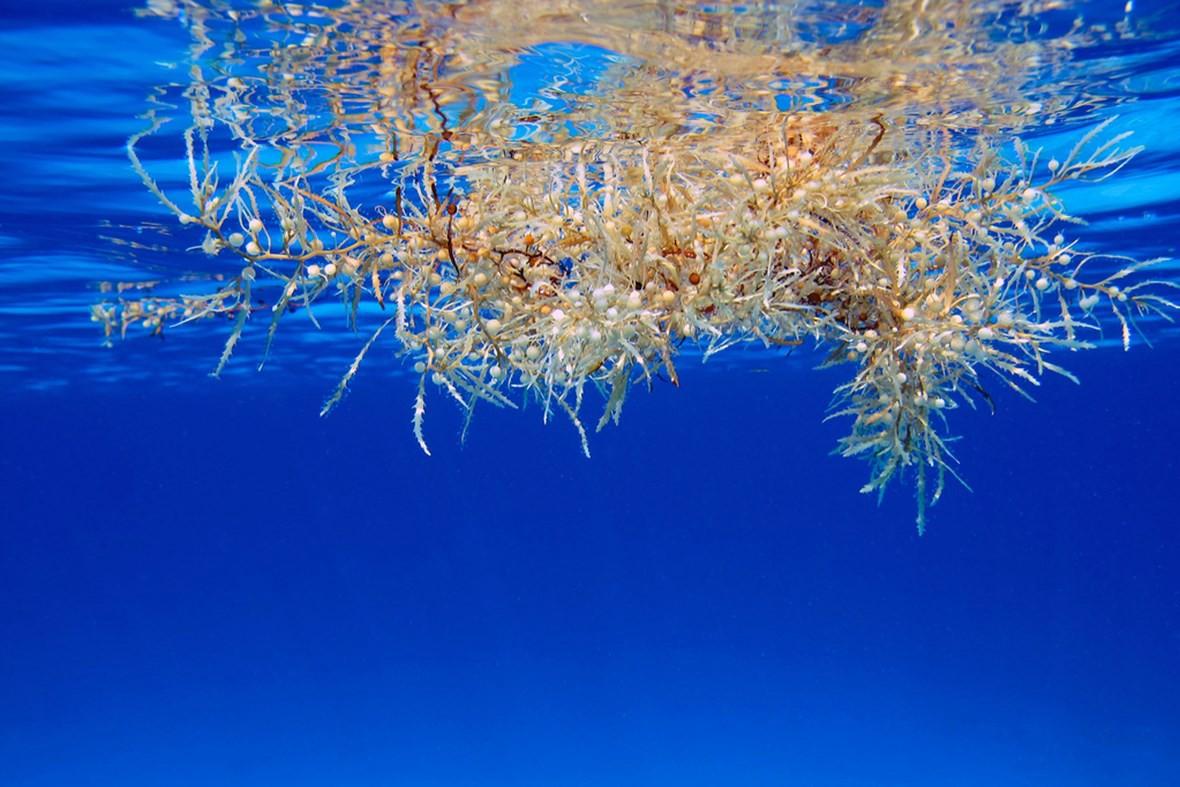 You may want the sort of grasping tendrils peas use to help explain them clumping up into great mats to form your islands. 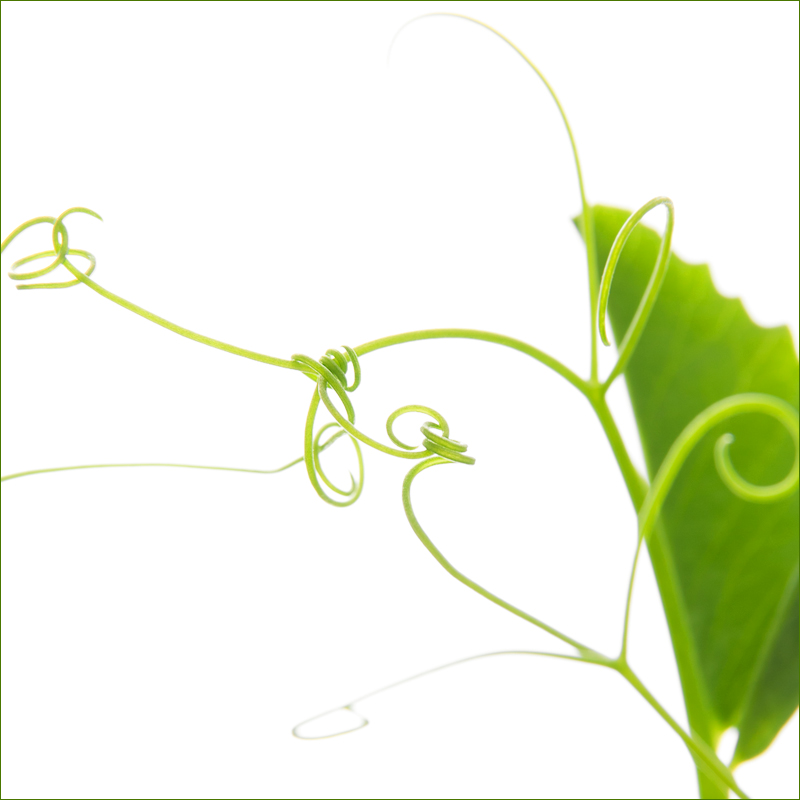 And you're definitely going to need aerial roots such as those found on moth orchids if you want them to remain alive after they've floated off into the air.

The buoyancy nodules will need to be massively bigger than an any existing plants & even then it might be an idea to jiggle with your worlds gravity & air density to make it all a bit more plausible.

I can't think of a single plant with all the characteristics you'd want so basically I'd say just pick one then hybridize & selectively breed it from there, or explain it with subsequent evolution if you want.

I like the water hyacinth so I'd use that, it's pretty.

Bladderworts might be the ideal candidate. They live underwater and fill sacs with air to create pockets to ensnare insects. You would have to engineer them to create helium instead of air, create bigger sacs, and have a permanent flowering period.

Not the answer you're looking for? Browse other questions tagged science-based biology environment flora genetic-engineering .