How would this Eusocial species deal with large Dragons?

My world has Eusocial Wyverns that live in groups of a thousand or so. They are about the size of rats. They have several castes, similar to ants or naked mole rats. All members of the same cast are the same size. They have a strong bite, sharp teeth, and an stinger at the end of their tail with a breath weapon as a possibility.

The dragons they have to deal with every once in a while are about the size of elephants when they're adults and are assumed to have a breath weapon. The dragons attack the Wyvern nests to eat the equivalent of their larva and possibly a honey-like substance they produce to feed them during the winter.

The eusocial wyvern's goal is to chase off the dragon at the very least regardless of their breath weapon, how would they do so?

They cook the dragon. 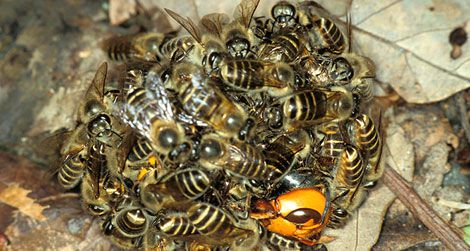 Your wyverns are bee analogues. Your dragon is a killer hornet. As the hornet is immune to any sting or bite a bee might have, so too the dragon is immune to the weaponry of the wyvern. The hornet is not vulnerable to individual bees. Together, the bees have an emergent property.

With a two-inch-long body and a 3-inch wingspan, the hornet is enormous – many times larger than the bees. But the honeybees have evolved a unique defense mechanism: When a hornet invades a honeybee hive, as many as 500 bees gang up and form a tight ball around the attacker. The heat from the bees’ vibrating wings and the carbon dioxide they respire proves a deadly combination. In less than an hour, the hornet is dead.

Your wyverns do the same. They cluster around the dragon and shortcircuit their breath weapons to heat up their entire bodies and keep them hot. The dragon is cooked alive. Most of the wyverns involved die too, either in the ball or later.

What is the relationship?

Eusociality almost by definition involves a caste system, so I'm not sure if your wyverns meet the technical definition, but that's semantics. However, without a caste system, every individual represents a reproductive unit and has an evolutionary incentive to avoid self destruction unless it is clearly to the benefit of their own gene group. Consider a caste system, or possibly rethink what the relationship between the dragons and the wyverns and humans looks like.

Even if these wyverns do produce a honey like substance, the dragon would not bother attacking a hive unless it was sure that the risk is minimal. Most animals do not even prey on animals with a high chance of causing minor injury which means that the wyverns CAN'T significantly harm the dragon if you want dragons attacking wyverns over food.

When a dragon attacks a wyvern nest, his scales are too thick for the wyverns to sting through in most places, and those few spots they can get through don't matter much because dragons have evolved alongside wyverns to have a high resistance to wyvern venom. So at most, the wyverns would be a minor irritation to the dragon. Not enough to really drive it off until the dragon is full enough to outweigh the discomfort of being stung.

The good news is that it does not matter that the wyvrens can't beat a dragon BECAUSE they are Eusocial. Eusocial creatures follow r-selection meaning that Wyvern colonies can get decimated by dragons on a regular basis and still recover quickly enough to do well as a species. Instead of victory, the wyverns need only to focus on not getting wiped out. To do this, the wyverns put thier "honey" near the outside of the hive and keep the queen and eggs near the inside. This way when a dragon attacks, it just rips open the outer walls, eats its fill of honey and leaves. It has no interest in eating the Queen or her eggs; so, the wyverns simply rebuild and go on about thier existence.

I would personally revisit your ideas for your other two eusocial creatures and really ask yourself if it make since for them to be dragon killers either. Things the size of elephants tend to follow K-selection meaning that they would not survive as a species if swarms of other creatures keep killing them off. When dealing with r-selection, you also need to ask yourself what is keeping these swarms of creatures from overpopulating. IE: if dragons aren't keeping their numbers in check, what is?

If the Wyverns are intelligent then you can use human ways of dealing with birds and big animals. One possibility is:

I would generally say that intelligence is the weapon for hunting bigger animals. During stone age humans likely managed to hunt to extiction all mammoths and cave bears.

And it is even more pronounced in mordern time. Just look around. Do you know about any bears in your nearby park/forest? They are (or almost) extinct in Europe. Wolves are forbidden to hunt. Alligators usually do not survive eating human children. And this is not even including modern technology. A dragon appearing in the sky? Will be hit immidiately by an anti-aircraft rocket. A dragon is too tough for an anti-aircraft rocket? Add an anti-tank shell that penetrates 1m of steel.

Not the answer you're looking for? Browse other questions tagged xenobiology dragons ecology insects .

6
How hot is my dragon?
4
Could an Environment Sustain Large Eusocial Animals?
5
How would a species descended from dipterans become eusocial?
1
How could an eusocial dragon species of elemental castes work?
4
What would be the evolutionary drives of a lush cave environment?
4
What would a eusocial species of lepidopterans look like?
5
My eusocial species has biological radio and limited verbal speech. Is this plausible?