In a future world, well-to-do people have access to piped food that travels straight to their kitchens.

Let us focus on one such food; the eternal sausage.

How do I achieve piped sausage to people's homes?

Allow me to offer up a question of my own from the dim & dusty past by way of answer.

Allow me to present to you [flourishes hand theatrically] the Ancient Roman Pneumatic tube Postal Service.

In short, a pneumatic tube message & small parcel delivery service of the type occasionally found (albeit to smaller scale) in old department stores at the turn of the century, the last turn not this one.

Obviously it's going to require switching stations much like the old telephone systems switchboard operators. 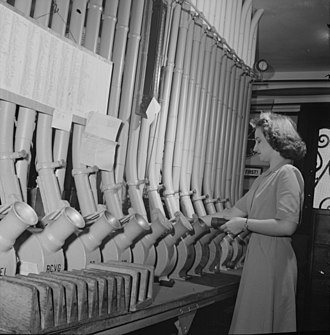 Sausages are of course the perfect shape to utilise such a comestibles delivery system.

Other food items would simply be packaged in appropriate sausage shaped parcels.

Company disclaimer: the company accepts no liability for incorrectly or inadequately addressed meals & any such will be summarily consumed by receiving party or staff.

Guess what goes bad if it's left overnight in a pipe at ambient temperature? Food with water in it.

I would propose a three-step system:

There you have it! After all, nothing goes wrong with oil pipelines, right?

I don't believe your premise, as it currently stands, is feasible.

However, one way you could get close would be to forget the "continuous ooze of food" and instead create a pneumatic grocery delivery service. With sufficient automation, users should be able to order any food the system can deliver and have it in their hands in a few minutes. You can safely deliver refrigerated and even frozen food this way.

The advantage of such a system is that it can deliver anything that fits within the canisters. If we stick to bank-sized canisters, that's plenty to get you:

Going up to a larger size, you could conceivably manage:

You probably won't want to go large enough for whole pumpkins, twenty-pound whole turkeys, whole pies (might not travel well anyway), or the like, but you aren't going to be shoving anything like that through a piddling 1" tube anyway.

...And you only need one tube for delivery of all sorts of goods.

Your pipeline needs to be clean, and odds are, you want to keep your food items separate. After all, you might have trouble returning a transmix of onions, curry, chocolate and sausage back to the refinery for reprocessing. So you need to send pigs through the pipeline. No, not genetically engineered 1-inch "imperforate" pigs that can lick 360 degrees, as much as I'm tempted, but something more like a little module like Wikipedia's image, but much, much smaller: 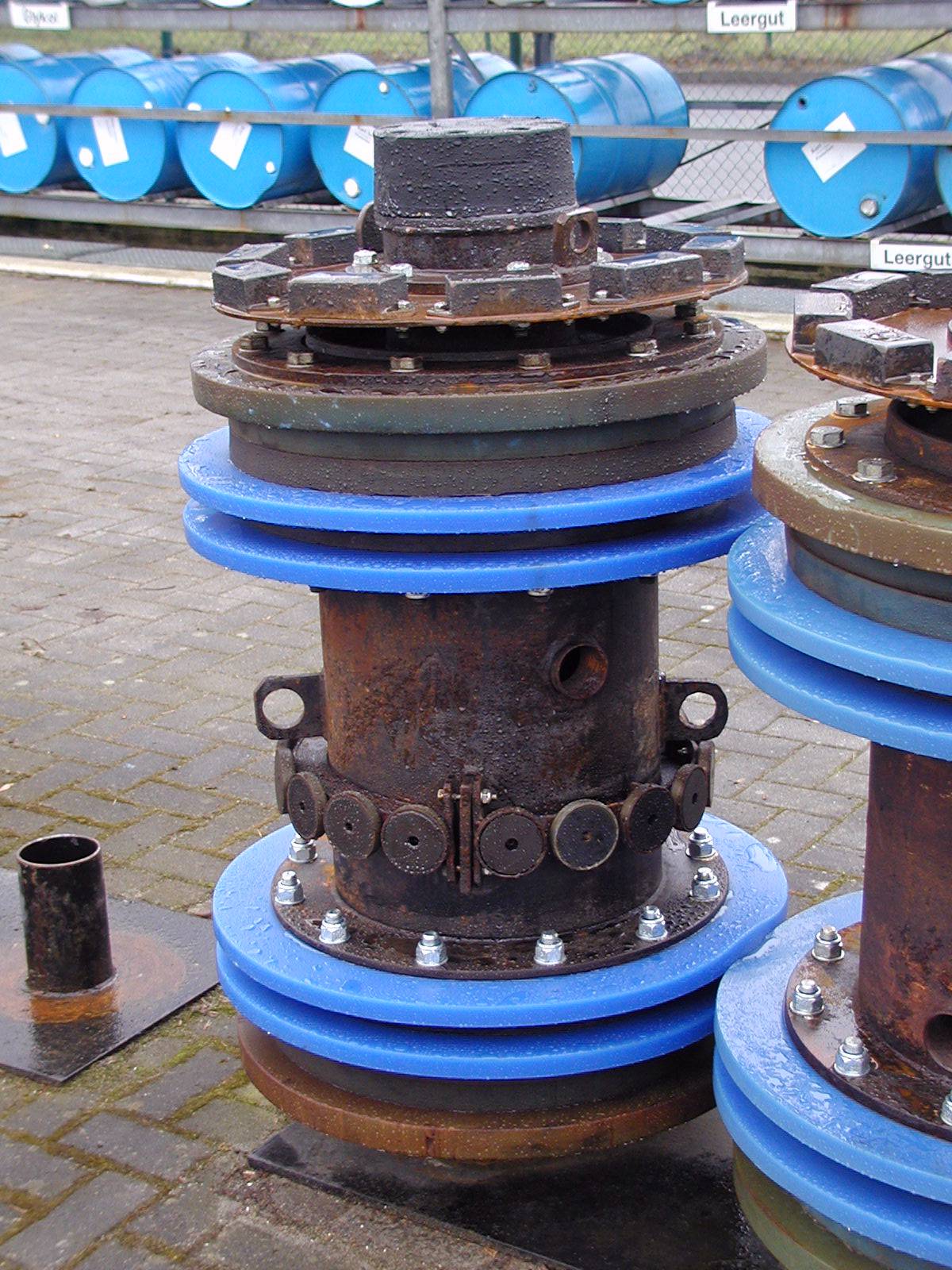 You rely on these things to separate the gasoline you fill up with from, say, diesel, though they can be omitted and the mixed-up fuel in between gets sent back to refinery, or when gas gets scarce and prices go up, you read about cars being ruined by filling at some local station that tried to get away with using some.

In this case, your pig might have some sort of little wheels or preferably some type of magnetic drive around it near the back end, because, face it, you're talking about trying to push a mile of sausage through a "very smooth" pipe, and I don't have to run the numbers to see there's a problem with doing that from one end. Here each pig pushes the material ahead of it, and if a few have trouble the others can push from behind to take up the slack.

Pigs are also useful for cleaning pipelines, which I imagine is pretty important with sausage. (Alternatively you could build your pipeline from intestinal cells perhaps surrounded by smooth muscle with a tissue printer, provide it with an immune system, and immunize against all possible food pathogens ... nay, I am liking that idea even less than this one)

So the idea is you make "sausage" (perhaps more like "pink slime") out of all your food products. Perhaps the wealthy patrons have outlived their teeth, even the implants, or perhaps it is a sign of poor breeding to visibly chew food. Each order is separated into batches of "sausage" pushed out by pigs. The pigs have tracking devices (not GPS - tied to the walls of the pipeline for much better precision) so the spouts know exactly when to open. When there is vacancy in the system, trains of cleaning pigs are added to the flow, so that they can more thoroughly disinfect the pipes and remove all traces of cleaner and double check before more food passes.

The Viands (the company's name is Viand, and the term is applied to each item delivered) are dispensed directly into glass tubes, which make a pretty pattern in the kitchen refrigerators. Later each one is moved, heated, and dispensed robotically during the cooking process. The use of "sausage" ensures that all aspects of cooking are very predictable and easy to automate. This makes for a coordinated artful display of technology. It also avoids the logical conundrum that a neighborhood wealthy enough to support this process should be too wealthy to have a place for hired cooks or people who cook their own food.

The end-goal is to get a continuous sausage out of the machine.

First a caveat that people have already mentioned: if the food remains in the tubes because people aren't continuously using sausage it shouldn't go bad. So I would assume that everything is 100% sterilized and cleanly passed through the sterile tubing system. For example the food is irradiated beforehand amongst other methods (most substances won't be significantly radioactive for more than seconds after exposure, background radiation is more lethal).

On to the actual answer. You want the endresult to be sausage in the houses. Unfortunately if you build up the eternal sausage at the distribution center you have the tiny problem of the sausage needing to make turns or having to split in multiple directions should multiple people try to get sausage at the same time.

The alternative: Assemble the sausage at the location. You already basically stated you have the ability to do so since you have a machine capable of it at the distribution center. That means you now "only" need to transport the sausage components to the site.

Suddenly it's all manageable. It doesn't matter now if you use the already proposed pneumatics or dissolve it into water before piping it or use delivery roombas, it will get there and perform your eternal sausage function.

A lot of folks have raised concerns about food going bad in metal pipes, but do we any real-life example of a system where food is stored in metal tubes and doesn't go bad?

You can imagine the pipeline being a 1 huge can. You would need to add the following mechanisms to make this work -

A similar airlock mechanism in the customer household will ensure only the desired quantity of sausage exits the pipeline and the rest remains sterile.

The reason I added preservative fluid is 2 folds -

I'd actually suggest bigger pipes and screws. There's certain kinda of pumps that do better for this - If you need a constant flow of mush between 2 points, a positive displacement pump works, and you can use a screw system to tap off materials.

It might also be useful to consider if your food mush can be self lubricating -which would ease movement, either through fat or other food additives.

The tech for bulk movement exists - the tricky part would be shelf life, palitability and distribution.

While the classic sausage has casings, I suspect that might not do well being pumped through and tapped off. You would either case the sausages on the spot, design sausages that are set by heat or pressure (with the piped mush being shaped and set at the customer end as needed) or have casings in cartridges as needed,

Not the answer you're looking for? Browse other questions tagged science-based reality-check near-future food .

20
How to create the eternal storm?
2
Eternal seasons bind to geographical areas
82
How Long Could an "Eternal" Fire Last?
6
How close are we to eternal consciousness?
8
What's the minimal space/mass required to feed a human indefinitely with advanced technology?
12
How can you have an eternal war against vastly weaker opponents?
19
What would the main ingredient of a cheap food for the masses be?