Could a self-consuming rocket be useful or cheaper than regular ones?

Technically speaking, all rockets are self-consuming, since they are basically tin cans with fuel. And to carry even less weight with then, they have stages. Allowing not only the rocket to go farther, but to change the nozzle engine. The smaller ones are good for atmosphere, while the bigger ones are good for outer space (the atmosphere density is a big factor referring to the rocket engines).

Well, since the rockets won't reach there in a single stage anyway, why do they need to actually reach the space intact?

The idea of a self consuming rocket is that the nozzle and the fuel tank (composing the majority of the rocket body) would be the same thing. Or at least being the less resistant as possible.

My idea, at least, is to use solid rocket fuel in a cone shaped metallic body like a stalagmite, or multiple ones, resembling Sputnik satellite. While the tip and last stage would be responsible for directing the rocket. What could make things easier to control.

The other idea would be to use a series of stacked nozzles and fuel in between them, consuming the fuel and the nozzle in a cascade. Simply put, to make as much stages as possible, increasing the redundancy and the safety of the spacecraft.

The third idea I had was to use a fuel tank that "shrinks" in size while the fuel is consumed. However, the tank would still have weight and the mechanisms too. So I don't know if it would be useful.

However, there is a lot of things to be thought in here. The first one is, ironically, the autophage factor. If the rocket consumes itself to quickly, it won't generate enough thrust. Or simply, the structure would need to be too thick to maintain the combustion, and so, making it unviable due to its own weight.

I "researched" a little prior to this post, and it is said that the UK is instantiating a "autophage" rocket. However, the only thing I could find is just the news of the UK releasing founding. And also an article talking about it, but you need to pay to see it. So I don't know if there is already a design (I found one in google images, but I can't tell if is the official one).

My idea, at least, is to use solid rocket fuel in a cone shaped metallic body like a stalagmite, or multiple ones, resembling Sputnik satellite. While the tip and last stage would be responsible for directing the rocket. What could make things easier to control.

Rocket nozzles are quite complex things... they're not just a bowl of metal in the right shape and call it a day. The Space shuttle SRBs, for example, had gimballed nozzles to help steer. With a rocket that's consumed from the bottom up, you have the problem of how you're going to keep everything balanced nicely without the use of moveable nozzles or aerodynamic surfaces (in the lower atmosphere, at least).

I'll also note that solid rockets have a relatively low specific impulse but an excellent thrust-to-weight ratio, making them great for disposal first stages for getting everything out of the thickest part of the atmosphere but not so great for getting into orbit.

The other idea would be to use a series of stacked nozzles and fuel in between them, consuming the fuel and the nozzle in a cascade. Simply put, to make as much stages as possible, increasing the redundancy and the safety of the spacecraft.

Now you're adding a whole bunch of parasitic weight in the form of a bunch of nozzles that can't contribute the same amount of thrust that their mass in fuel and propellant could, even if your nozzles could be burned up when no longer needed but relied upon to remain whole at all other times.

The third idea I had was to use a fuel tank that "shrinks" in size while the fuel is consumed. However, the tank would still have weight and the mechanisms too. So I don't know if it would be useful.

Unless you've got a way to shed mass, you've gained nothing. If you can burn the casing of your rocket somehow you might get a teeny bit of an advantage, but you need to be able to feed it into the engine in such a way that you can generate thrust from it. This is gonna require some kind of pecular Heath Robinson contraption (or Rube-Goldberg, if you prefer) and presents difficulties in making an engine that can burn both conventional fuel and whatever you've made your rocket out of. Making the body of the rocket burn energetically enough to be useful as rocket fuel sound like an absolute safety nightmare!

In the meantime, you've got the likes of SpaceX delivering pretty boring, conventional, cheap, reliable, reuseable, 2-stage-to-orbit rockets. How're you going to compete with that?

I "researched" a little prior to this post, and it is said that the UK is instantiating a "autophage" rocket

I don't think there's much to go on that you didn't already find, but this Space Exploration SE question and answer might help.

I don't really see the point myself, but maybe I'm just not visionary enough...

Impossible with today's tech. What about tomorrow's?

We can't do anything like this with present day tech, it's just not going to work. Starfish Prime's spells out why this wont work in good detail. However, technically you didn't specify the tech must be present day.

Aluminium is a really good thing to make rockets out of. It's light and strong.

Aluminium is also surprisingly a rocket fuel. The solid fuel boosters attached to the space shuttle sides burn aluminium powder as their fuel. There definitely is a potential here.

The rocket fuel detailed on that NASA link is 16% aluminium powder, 69.8% ammonium perchlorate, 0.2% iron oxide (rust), 12% Polybutadiene acrylic (binder) 2% Epoxy. It is mixed together extremely well ("Atomised") before it's poured into moulds and then set.

You need a way to recreate this carefully mixed substance. Lets just "black box" this and assume it'll be available in the future and worry it about it then, what would such a rocket look like? Here's my suggestion: 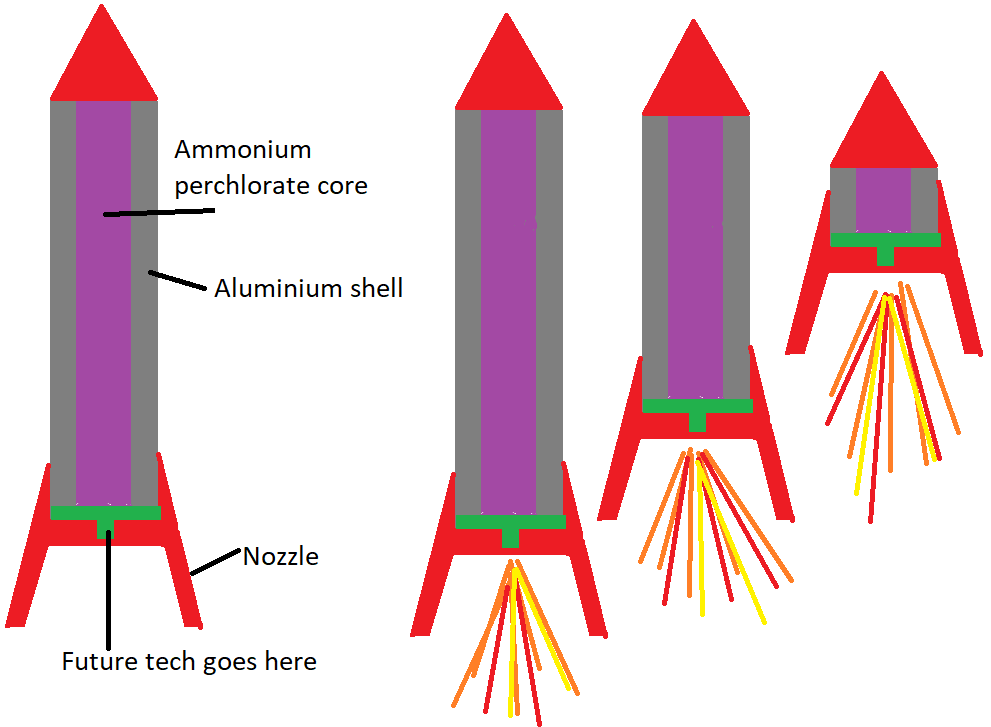 The thick outer aluminium forms the outer shell of the bulk of the rocket, the nosecone goes on top, and part of the nozzle housing wraps around the aluminium shell, holding it secure. The ammonium perchlorate is reasonably reactive and weak and should be on the inside, protected by the strong aluminum. The nozzle housing mounts onto the aluminium shell reasonably tightly, but the acceleration of the thrust pushes into the rest of the rocket, forcing the core and shell into the future tech. That future tech consumes the shell and core.

As the fuel is used up, the rocket shrinks, until the nosecone, the nozzle, and the future tech are all that's left.

So what's the future tech? I don't know that's up to you as a writer! Maybe some currently-undiscovered catalyst that dissolves and mixes everything except what the nozzle is made out of? Maybe some nanobots that move the molecules into a nice mixture? I'm sure there's some relevant technobabble that can be made to give it a cursory explanation.

Not the answer you're looking for? Browse other questions tagged physics space-travel spaceships scientific-development rockets or ask your own question.

20
Traffic in Space (a traffic controller for low earth orbit)
7
Possibility way of exiting earth in a bullet shaped rocket
7
Would lower gravity lead to earlier spaceflight?
6
Space ships with launch engines AND space engines
3
Do bigger rocket work better?
13
Does the sun provide enough energy to accelerate a large ship to a decent proportion of the speed of light?
7
What is the most plausible way to lower cost to orbit?
7
How close can a launch pad be to a lunar base?