How do I create realistic geography?

There are many fictional worlds that don't make sense. How can I make sure my biomes flow with a realistic feel? Like where should I place mountains to create desert areas? What are some biomes that can never be located next to each other (like a jungle next to the arctic for example)? What are the tips and tricks of making my world feel like its a product of evolution and not feel like the writer just put stuff in random spots as he realized he needed stuff?
geography worldbuilding-resources
Share
Improve this question
edited Apr 12, 2020 at 22:24

There are some interesting world generation programs/websites out there that allow a user to explore the interplay of plate tectonics, trade winds, ocean mass and a few other factors.

As you have noticed, getting climates right is hard and takes a lot of study. Here's a few ideas that may help you explore our planet and make your own more believable.

Approach 1 Get a big map of Earth or open Google Earth. Pick a random point over land and look up the climate at that location. Look up maps of prevailing winds (a brief Google search turns up hundreds of such maps) and find any mountain ranges between the selected point and the nearest ocean in the direction against the prevailing wind. Select a few points and repeat this process.

Approach 2 Picks a climate type, desert, rain forest, savanna, tundra, which ever you like. Find every example of that terrain type and compare them. For example, what's the difference between the Sahara and the Gobi deserts?

Making believable climates rests on getting your water cycle and latitudes right. Lush rain forests in the rain shadow of mountains is flat wrong. A vast tundra at sea level near the equator is equally wrong.

Look at geography in the real world and in geologic history. Note interesting small clumps of features and context: maybe you like that place where the desert is next to the sea, or the deserts and mountains of chili, or how the basin allows LA to get hot air in winter and is prone to wildfires. Find out what causes monsoon rains and design a feature for that.

Piece together the world from these real-world contexts. You can base rich details on the corresponding real place.

The way I did it for my world building was I started with the continental plates and how they had been moving in relation to each other, this movement decides where land and mountains will be. It will also indicate where there will be different rock types and different soil types.

Plate teutonics will also tell you where there might be vulcanoes and hot springs.

There should be models online for how ocean and wind move when they are unhindered.

When you know where warm and cold water currents are moving it will be easier to see which zones will be warmer or colder on land. When you combine this with how hotter air carrying moisture is meeting colder air or mountains you will see where it gets more or less rainy.

When you considder the movement of moisture over time it will be possible to have ideas about what sorts of landscapes would form under those conditions. In relation to this you can also think about ice ages and where glaciers might have scoured the mountains and rockfaces.

I much prefer this bottom up process because it ensures that there is a coherence to the planet. It decreases the risk of suddenly having an area of land with a climate that doesn't make sense.

It also makes it possible to know little bits of everyday knowledge about what it is like to live there, like for instance, what direction the wind usually blows from and whether it brings hot or cold weather when the wind changes.

Additional things to consider is how wether changes throughout the year and what this means for climate and living conditions. f.ex how heat in the summer can cause heavy rain like monsoons on an anual basis. Or how changes in the water temperature in the oceans could cause winds to change along the equator and therefor cause el niño like conditions of local draughts or floodings.

This depends a lot on your intentions,

You can set out some rough guidelines (I need a bunch of islands and a big desert on the same continent as some quality farmland) and then work from there, figuring out what you need to get it. But if you get too detailed you will end up having to change things. The other approach is just to create a world and write the story to fit it, computer generation is your friend there, since it will work out everything for you.

Assuming an earth like planet, two things decide climate continental position and average temprature, everything else gets derived from those two things. Continental position and planetary air cells (which don't vary much) decide most of your climate with average temprature deciding more overall trends. I will mention each one briefly because each could be a question in and of itself, which not be a bad series.

Air cells form fairly straight forward patterns, and control prevalent wind directions. They can be simplified into rising air is warmer and wet and flavors forests and descending air is cooler and dry, and favor deserts. Large biomes generally will not cross these cells, the exception is if they are very narrow and bordered on one side by mountains and coastline on the other. 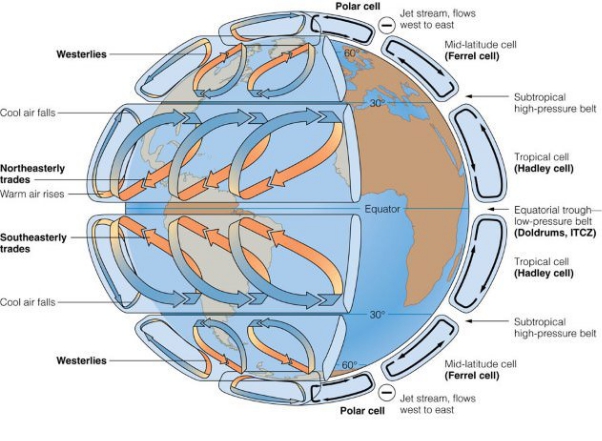 Continents in how they are moving tell you where your mountains and volcanoes are, how easy it is for ice sheets to form, and where your rivers are. the same continent at a different latitude can have a very different climate due to which air cells it is interacting with but there are some general trends. The leeward side of mountain range is drier and the windward side is wetter, and the bigger(taller) the range the more extreme this is, this called rain shadow. Rivers mostly flow from mountains to the coast, merging into bigger and bigger rivers the farther they go. One of the easy give aways of a fantasy map is rivers that make no sense. If you have continents close to or over the pole it is very easy for ice sheets to form. Continents also of course shape your oceans and ocean circulation can have a lesser effect on climate as well, for instance the flow of water from pole to equator in the atlantic keeps the east coast of the US wet and warm.

Of course continents themselves have rules, continents tend to have coastlines/bordered they are a collection of 120 degree angles connected by rough more or less straight lines, this is caused by how rock breaks under pressure. The exception is subduction arcs which form arc shaped islands or island chains (see alaska or japan) Another easy give away of a fantasy map is continents with long straight coastlines or many smooth curves.

You can make your worlds flow somewhat realistically by considering climate and airflow. Using your example of a desert next to mountains, you could have only dry air hitting the desert side of the mountains, causing most of the streams to flow down the other side. Putting hot biomes near the equator is another example of considering climate, because realistically, there will be a warmer temperature in the equatorial region. If you consider the humidity side of climate, you will not place dry areas next to wet ones, and have some reasoning to this. Doing this will naturally make biomes that are located near the correct other biomes and make sense.

There is also an entire Video series by the Youtuber Artifexian who detail every step of the mapmaking process from tectonics to climate and currents. Highly recommended.

Not the answer you're looking for? Browse other questions tagged geography worldbuilding-resources .