First visible signs of human habitation on the Moon. What could we see from Earth?

Let's assume that one day there is a substantial human colony on the Moon. Much later, the Moon becomes terraformed.

I'm trying to imagine when and what humans would first be able to detect with hand-held telescopes or binoculars when viewing the Moon from Earth.

Would they first see the lights of a large city on the night side of the Moon? Would they be able to see a city that is the equivalent of Tokyo, say?

Would they not see anything until substantial terraforming had been done and the Moon became a 'blue planet' like Earth?

How can we calculate the size and relative brightness of human construction that would enable the Earth-bound to actually see something distinguishable on the Moon's surface?

There would be plenty of media coverage of course, but I'm interested in what would be the very first signs that would be visible just by looking up on a clear night, possibly with the aid of an ordinary 21st century type aid such as a hand-held telescope or binoculars.

Please ask for clarifications before answering.

You could see Tokyo on the moon with a cheap telescope.

The first thing on the moon that could be visible from earth is already there.

Will anyone notice, 100 feet away, something else Armstrong left behind? Ringed by footprints, sitting in the moondust, lies a 2-foot wide panel studded with 100 mirrors pointing at Earth: the "lunar laser ranging retroreflector array." Apollo 11 astronauts Buzz Aldrin and Neil Armstrong put it there on July 21, 1969, about an hour before the end of their final moonwalk. Thirty-five years later, it's the only Apollo science experiment still running.

Although it can not be viewed by binoculars, it can be seen by telescopes if one times it right.

But guaranteed, any large solar array would reflect light back to earth when the moon is in the correct position, and the flash would be easily seen by binoculars.

But to actually SEE anything and recognize it, here is what the Hubble telescope could see.

Hubble's 94.5-inch mirror has a resolution of 0.024″ in ultraviolet light, which translates to 141 feet (43 meters) at the Moon's distance. In visible light, it's 0.05″, or closer to 300 feet. Given that the largest piece of equipment left on the Moon after each mission was the 17.9-foot-high by 14-foot-wide Lunar Module, you can see the problem.

So if you are talking a human-made feature, 300 feet would be the minimum size for a very powerful telescope.

If you want binoculars, then to see a covered dome over a hundred km. diameter crater, the minimum would be a good 40x or 50 x binocular would work. You are not going to see a typical lunar habitat, of course, or make out any detail - you will only be able to see that something is there.

They are very expensive BTW. With such powerful optical instruments you can see a big picture of the Moon and craters, even small ones.

But 90X is better

But I would recommend image stabilization binoculars.

Of course, something like this Orion GiantView BT-100 ED 90-degree Binocular Telescope would give you a clear view of a domed crater, for sure. 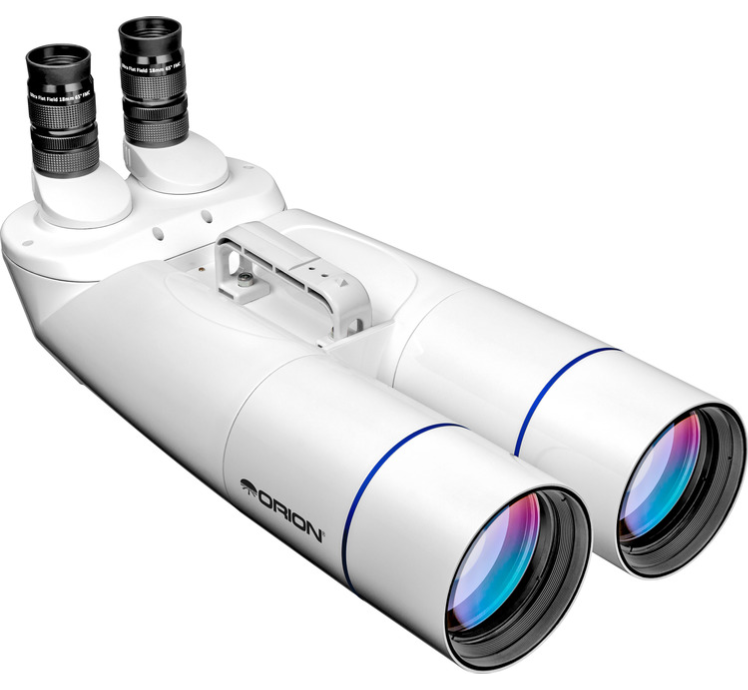 Views of lunar craters to wispy nebulae will take on an almost 3D feel in the GiantView BT-100 ED. The 100mm aperture objective lenses gather 56% more light than 80mm binoculars, so you'll be able to see more objects in the sky with greater clarity. Blockquote

The largest technical constraint to observing the Earth from a lunar base is spatial resolution. At the sub-Moon point, the diffraction-limited resolution (R) can be approximated (in km) by R = λ/D where λ is the wavelength (in microns) and D is the telescope diameter (in meters). At visible wavelengths a spatial resolution of 1 km or less requires a 1 meter or larger telescope. Figure 2 shows this relation for three telescope diameters. Blockquote

So obviously we could not see an individual building, or even a city block, on the Earth from the Moon. Likewise, we could not reasonably see it in the other direction, either.

But features bigger than a large city on Earth could be discerned from the Moon using a 100 cm. lens. Mind you, this is just discerning that it is there, not seeing any details about it. Like seeing a blob.

Put in perspective, it is doubtful that a nuclear explosion on Earth would be more than a speck as seen from the Moon through very powerful binoculars.

This article concludes by saying

While the arguments for Earth observations from a lunar observatory are intriguing, it is typically considered unlikely that the advantages outweigh the challenges when viewed insularly. However, as stated by [10], “a lunar astronomy program should complement the earth-orbiting satellite program.” For example, one can easily imagine simultaneous observations of the Earth from instrumentation on the Moon and from geosynchronous Earth orbit (GEO) meteorological satellites in order to provide radiometric crosscalibration between instruments.

Let's take another approach. Can we see a meteor impact on the moon from Earth with the naked eye? Apparently, we can. NASA has been looking carefully at the Moon for meteorite impacts, and has logged some that could be seen by the naked eye, if you happened to be looking at just the right time,

To get an idea of how nontrivial, NASA began counting visible strikes. So far it’s tallied more than 300. The one on March 17 was the biggest so far, ten times brighter than anything seen previously, although nowhere near the hypothetical one-kilometer catastrophe you’re talking about. This rock was more like a foot in diameter and weighed maybe 90 pounds.

Still, it was traveling close to 56,000 miles per hour and had an impact equivalent to five tons of TNT, gouging a crater perhaps 65 feet across. NASA has asked the scientists operating the Lunar Reconnaissance Orbiter, now mapping the moon’s surface, to take a picture of the March 17 crater, and they expect to get around to it later this year.

So an explosion of five tons of TNT would do it. That is some industrial accident. Or a very big mining operation.

However, if you were looking at the moon with an infrared imaging device on your binoculars, you could most certainly see evidence of heat signatures from a reasonably large enough colony, say 5 km.in diameter or so. Seen as a pin-prick of light, perhaps.

So apparently you will have to wait until the moon colony develops a substantial light pollution night time map, or a heat signature, of a major city before we will see it reliably and be able to make anything of it, using binoculars, from Earth.

Not the answer you're looking for? Browse other questions tagged science-based moons space-colonization earth far-future or ask your own question.

6
How would people power vehicles on a planet with no fossil fuels (like Mars)?
7
At what stage would we have detected sentient/intelligent life on the moon?
12
What's a plausible-sounding technobabble explanation for Mars to be a forest world supplying Earth with timber?
12
Could we use telescopes and mirrors in space to see crime in the past via analog?
6
How long would could a mars rover remain intact?
2
What could be some form of technology that could and would be rapidly formed in the event an new space race was started
6
Could a planet with many moons see a different moon each night?
9
Making the Moon brighter with talcum powder - how much brighter could it be?
5
What environments wouldn't be present on a recently terraformed planet?