So the premise is that life under the sea and life on the ground has evolved independently and achieved sentience. Finally, the land creatures (I'm using humans for now because of simplicity, I'm still working on this) reach a level of technological sophistication where they can travel underwater and can reach the mesopelagic zone. I want the people underwater to have a similar level of sophistication, maybe a little bit behind, but the question is would it make sense for them to have evolved limbs with finger-like appendages and if not, how would they build homes and such.

Oh, they have already. 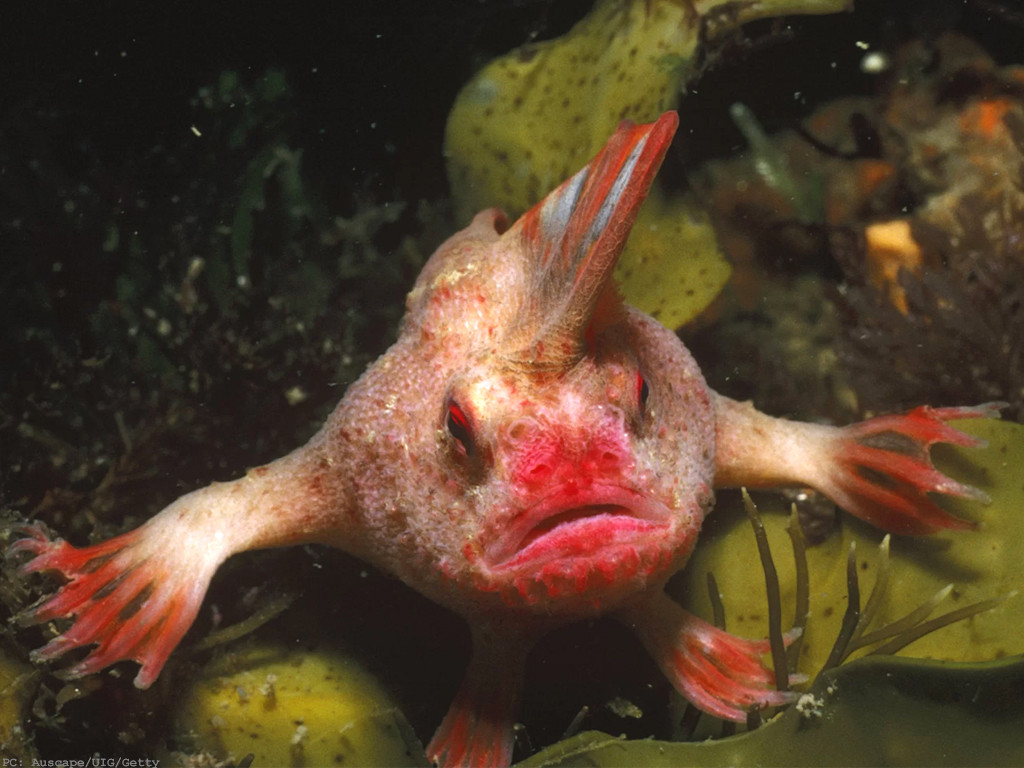 This critter prefers walking on it's fins, it has shoulders, elbows and wrists, it's "hands" have finger-like projections which extend beyond the webbing which fish normally have. Living in Tasmanian river estuaries and being a slow mover along the bottom most of the time, the Spotted Handfish can swim when needed, but prefers to pootle along on it's modified pectorals (and caudal fins in some related species giving them four limbs).

There are many indications that the first tetra-pods emerged around 380 million years ago, and were exclusively underwater when they did, an eye-blink in evolutionary terms lead to hands and feet, your creatures might quickly manage to evolve these features in a few tens of millions of years, maybe fewer if their genes/environment permit.

Given time and sufficient evolutionary pressure, articulations in those fins resembling fingers evolve by the same developmental signal for the proximal joints recurring, might move distally (as happened to create the elbow/wrist in the first place), and their webbing might recede; perhaps if winkling small prey out of difficult crevices were an advantage.

The big hurdle you'd have then is the energy and incentive to develop big brains. For primates, dexterity and brainpower to use it seem to have developed together. Tricky problems (like prizing open a clam for the flesh) requiring manipulation of objects as tools offer the incentive and energetic reward to "grow brains and fingers. Tool use proper would then come into play.

If you look at our seas, the closest appendices looking like limbs have been developed by cephalopods, starfishes and crustaceans.

They are nowhere close to the complexity of human fingers, but at least in the case of the octopus they allow for quite some degree of manipulation, followed by crustaceans.

Considering that fingers have evolved after a long series of modification from some fish fins and you are excluding this path, I think it's more plausible if you move along the tentacle path or the crustacean path.

Of course they could, because they did. I reference the transitional fossil fish Tiktaalik. While it hadn't yet developed fingers or toes, it had definite limbs. The front pair had shoulders, upper arms, lower arms, and wrists.

Now, this seems to have evolved to help push the animal out of water so it could use its primitive lungs in cases of oxygen-poor water. What theoretically could happen is that this evolved in fresh or brackish environments, and after the creature developed gasping fingers, it moved back out to sea. If it wasn't an open-water swimmer but tended toward living on the substrate, then the limbs could have retained functionality for moving around underwater, looking for prey, and eventually tool use.

Again, an analogous sort of thing has really happened. The bony fish have a swim bladder, which is believed to have evolved from a primitive lung that was developed by a group of fish that lived in that same type of environment, migrating back to the marine environment but retaining the gas-filled organ, using it for buoyancy instead of being a lung.

Your problem will be having a fully aquatic water breathing species reach near human levels of technical sophistication with or without limbs!

In order for humans to reach mesopelagic zone deliberately (going down in a sinking hip doesn't count) as mentioned requires 20th century levels of technology. That means high level metallurgical skills, mastery of electrical engineering, industrial chemsirty and all the academic and practical skills associated with a civilization capable of that feat.

Your aquatic species will have none of that, no metallurgy - not even simple spear tips or knives, no electrical engineering or non-water based chemistry, no nuclear physics, astronomy etc etc

In short it won't be a meeting of near equals but rather that of a technological backwards culture meeting an advanced one. Which never tends to end well of the former. They may have advanced knowledge of mathematics, aquaculture, organic chemistry and acoustics etc. But what they will lack is the ability to apply that knowledge in practical ways because they won't be able to make the tools necessary to progress applied science and engineering.

Not the answer you're looking for? Browse other questions tagged biology evolution underwater .

14
How could an underwater civilization develop electricity?
11
Urban centers for octopuses
24
What is plausible biology of ocean-dwelling, tool-using, intelligent creatures?
2
What Factors would Likely Govern the Degree of Similarity between Intelligent Aliens and Humans?
7
What would the "tanks" of an underwater race look like?
30
Are there any structural materials suitable for production underwater?
7
Would storms on an ocean world harm the marine life?
6
What could cause a race to evolve with their limbs' primary functions reversed?