I'm trying to write a science fiction YA novel which takes place in a world with FTL travel like in star wars and star trek. One problem I've been thinking about is how a spaceship would navigate in deep space. There are no landmarks in outer space and traditional methods like using constellations wouldn't work because a group of stars wouldn't look the same from different directions.

Is there any way to navigate in deep space so a spaceship can move from planet to planet in distances measured in lightyears without getting lost?

edit: by "from planet to planet" I'm not referring to planets within our solar system but far outside it. I also assumed it wouldnt be possible to identify a specific star as something else.

There are no landmarks in outer space

But there are! We have a fairly good idea of where stars and galaxies are right now, and where they will be in the next millennia. For example, this is the map of the stars closest to our sun across time: 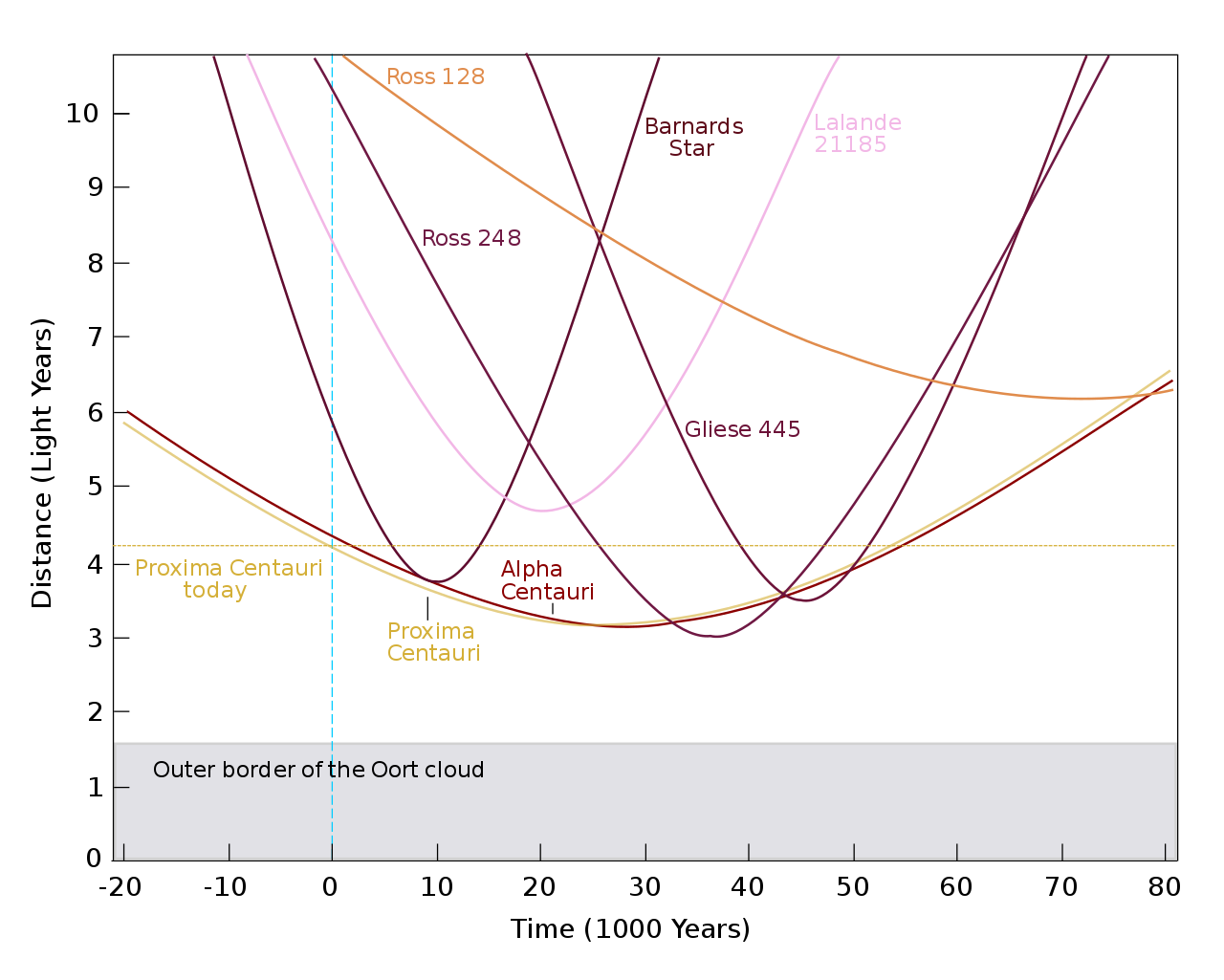 Also notice that the Pioneer Plaques (NSFW) have a set of coordinates to Earth based on the position of some pulsars:

The radial pattern on the left of the plaque shows 15 lines emanating from the same origin. Fourteen of the lines have corresponding long binary numbers, which stand for the periods of pulsars, using the hydrogen spin-flip transition frequency as the unit. Since these periods will change over time, the epoch of the launch can be calculated from these values.

The lengths of the lines show the relative distances of the pulsars to the Sun. A tick mark at the end of each line gives the Z coordinate perpendicular to the galactic plane.

As long as you are able to find some known stars of galaxies and figure out the time you spent travelling, you should be able to triangulate your current position relative to where you came from and where you want to go.

There are indeed landmarks in outer space. Quasars are very bright(at their source) but very distant objects, visible from effectively the edge of the universe. So distant than any local (or even intergalactic) travel will not distort their configuration.

There are not so many that one can get lost among them, yet there are enough that they provide a very nice 3-d orientation of space for the observer.

OK. So we know what direction is where. This still does not tell us where we are.

We need other, closer reference points. Fortunately, we have them:

With the absolute orientation provided by the Quasars, and the direction of the galactic core, and the relative offset of nearby galaxies relative to the core, we can determine our position accurate to within single-digit parsecs anywhere within the Galaxy. The only reason we cannot get even better accuracy, down to a few AU, is that neither the galactic core nor nearby galaxies are point-sources. We need to estimate within a small fraction of a degree where their "middle" is, and this introduces a minute bit of fuzzyness to the measurements.

Any better navigation than this will require star-charts of the appropriate region, of course.

The only time when celestial navigation such as this would fail, is when the optical view of the surrounding space is obscured. I.e. in a very dense nebula, etc.

But if you can see the sky, see the stars.. You can pinpoint your location.

On Pulsars: People love to propose using pulsars for navigation.
Pulsars are Neutron stars that emit pulsed radiofrequency signals as they rotate, with extreme precision. So one would naturally want to be use them for navigation.
And if you are limited to sublight speeds, it will work fine. You will never go far enough, and never bypass time by traveling too fast, for these signals to deviate. Good, pinpoint, loud, radio beacons!

But in an FTL-capable universe, they become worse than useless.
The problem is that a pulsar rapidly slows down the rate of spin. For a newly-made pulsar with a pulse rate of 1-10ms, the slowdown rate p-dot is at a rate of $10^{-10}$ seconds per second. This means that every about 120 days the pulse rate slows by 1 ms. For a slower Pulsar in the 30ms range the p-dot is about $10^{-12}$ to $10^{-13}$, after which slowdown remains roughly constant until Pulsar "death", where the magnetic field is so weak that the pulses become weak and fuzzy. A 30ms pulsar will slowdown to 60ms in about 1000-10000 years.

If you fly at FTL speeds towards a pulsar, you will see "newer" light from the pulsar. In effect, the pulsar will appear older, and slower. As you could only recognize it by the rate of its pulsing, it will now appear to be a different pulsar, and you will be lost in space!

"There are no landmarks in outer space and traditional methods like using constellations wouldn't work because a group of stars wouldn't look the same from different directions." Actually, that's not true... there are some celestial bodies that have such unique qualities that they can be identified from almost any direction. Some proposed navigational systems for interstellar Wayfinders would be a system that looks for the pulse of various known pulsars to get it's bearings as to where they are in verse.

Pulsars are highly magnetized compact stars (neutron or white dwarf stars). Because of these characteristics, they emit a strong beam of electromagnetic radiation once over a consistent period of time. Not only are these pulses of various different types of em emissions, but the period of time between known modern pulsars range from 1.4 milliseconds to 118 seconds long... and are so precise that several pulses are more accurate measures of time than atomic clocks.

A FTL navigation system could therefor get it's bearings by looking for multiple known pulsars and computing the delta of x, y, and z points in space to Sol/Earth which would be at the point of (0,0,0) of a 3 dimensional graph (much like how we use triangulation to help map where we are with GPS systems).

Not only is that highly plausible, but we've already used this system to show where we are on the map. Both Pioneer's plauqes as well as Voyager's golden records include a rudimentary star map engraved on them. They show Earth's relative location to 14 different known pulsars as well as each pulsar's unique time signature. These maps are intended to identify to extraterrestrials where the probes came from should they happen upon them in their space travels. No other features were give because this was so reliable of a map from our understanding.

Your ships are never in outer space.

In Star Trek, it seems like when travelling at warp speeds they are in real space to some degree because they drop out of warp and they are in outer space. Less sure about hyperspace for Star Wars - do people fall out of hyperspace?

In any case, your people have FTL which means they traverse hyperspace or some comparable extraspatial dimension. They plot a course from A to B before making the jump. Perhaps they use hyperspace beacons of some sort to facilitate the jump to the planetary system, jumping from one beacon to the next. Maybe straight jumps are too energy intensive and you would need to plot a course from beacon to beacon, just like a long distance trip on earth would plan to stop at towns and oases along the way. Town and oases are where adventure happens!

If you made FTL reliant on beacons that would side step getting your bearings in outer space which seems kind of boring. The worst you could do is jump to the wrong beacon. Once you were there you would realize that you were at the Chattanooga beacon (it says CHATTANOOGA in big white letters) instead of the Cincinnati beacon and realize that your navigator had been staying up too late in the holodeck.

Why did I include other people's answers? Well... I didn't... I pounded out my answer then thought to myself, "you know, that was kinda obvious..." and then read everyone else's answers. That's when I discovered most of what I'd said hadn't been said first.

Finally, keep in mind that by invoking FTL flight you're throwing what we understand about physics today out the window. And yet you're asking about how to navigate. There's a reason some SciFi stories/franchises simply ignore how navigation works, simply referring to things like "stellar cartography" or "astrophysics" as the solution to the problem. Or not mentioning it at all. Even if we assume something like the Alcubierre drive could work, there's all that messiness with time to be dealt with. Worrying too much in a children's story about how navigation occurs might be straining at a gnat.

Stars have fingerprints. The spectra of stars is unique to that star. The brighter stars the blue giants are visible for thousands of light years.

For short hops, the constellations at least in some directions will distort, but will have some resemblance. The best resemblance will be one behind you. Some one who knew the skies well should be able to figure out what direction you went within 20 degrees.

As an analogy think of boating in the Aegean sea. There are lots of islands. Some of the islands have light houses. Using the bearing to different lighthouses you can plot your location. Now in space, you don't have quite the known magnetic field you do here, (there is s magnetic galactic field, but I don't know that it's reliable for direction near starts) but you can still measure the angles between bright starts (akin so measuring the angle between the Rhodes lighthouse and the Kasandra light house) On the flat ocean you need two measures to plot a position, 3 to serve as a check. To get 3 independent measurs takes 4 lighthouses. The similar measures is space take 1 more for each of those due to 3D.

You would use a series of fixes: The bright beacon stars give you a rapid fix since they are visible from far away. Once you know about where you are using closer, dimmer stars give you a better fix. Measuring stellar angles in space to a few micro arc-second is reasonable. This can, in principle locate you to within a light second even using stars a thousand light years away.

Neutron stars are also good beacons, but aren't as precise because they are radio frequency.

Not the answer you're looking for? Browse other questions tagged technology science-fiction space-travel navigation or ask your own question.

6
Logistics of civilization with point-to-point superluminal travel calculating a pseudo-current map of the galaxy's navigational hazards
1
How to calculate the time on planet B for an event that happened on planet A?

5
Communication and Navigation for space flight on Europa
10
FTL in a relativistic universe: can my scheme be exploited to make a time-machine?
16
Stellar Navigation for Dummies - Finding your way home
2
how would a spaceship helm “user interface” (flying controls) be designed in detail
7
Navigation on a tidally locked planet
9
Spaceship Emission Security
65
How to prevent superluminal traveling idiots from wrecking half of the universe?
12
Figuring out the Cosmic Compass (Updated)