I am looking to fashion a passably believable fantasy ship for a crew of about 30 privateers* (see remark, this could be changed if needed, although I prefer not to have a massive crew in the story). I imagine this being something like a two-masted ship to the general tune of our traditional pirate ships, but with a team of oarsmen (I'm thinking 12) acting as an auxiliary to the sails for increased speed. I also imagine the ship would have its upper forecastle and poop decks, the main upper deck (with galley and officers' quarters), a first-level internal deck with crew hammocks and oarsmen ranks, and a lower orlop/hold primarily for cargo (and possibly a small brig).

For weaponry, I intend to make use of devices such as grapples, ballistae, flaming arrows, and large crossbows mounted around the ship...plus some magical-type stuff, of course. They don't use gunpowder in this world (at least not at this point in history). Anything technological tends to come from the use of special gems and power crystals. Small automobile-like vehicles are in limited use, but nothing large-scale enough to propel a ship at sea.

As I describe this, does it sound plausible? What might I be missing?
What types of ship might this resemble - galley, schooner, xebec, galleon, carrack, brigantine, some hybrid thereof...?
Approximately how fast could we expect this ship to move in generally favorable conditions, with and without the use of the oars?

<sup*this crew takes jobs for hire to bring in high-value goods and goods that might require somewhat roguish tactics to obtain. For example, they might go to another nation to retrieve a rare artifact held under guard. Or, they might bring in a high-value shipment that requires special protection and defensive measures. I figured "privateer" might be the best way to brand them...but if you suggest something better I'm happy to hear it

As everyone keeps pointing out, the crew size you are listing is very small for the kind of ship you are asking for. You either need to give up oars, simplify your ship, or vastly expand the size of your crew.

My suggestion is that, for a bunch of privateers (or in this case, raiders), you need a Viking longship like the Snekkja, or possibly a Knarr. Some of these ships had a cargo capacity of 24 tons. They have sails and oars, are about right for your crew, and are extremely seaworthy. It was also a highly versatile cargo ship. These are excellent raiding ships, and don't require a port because they are easy to run up on a beach. So while your enemies might need a dock, you can duck in and out of places with ease.

But don't expect to be firing big guns from these vessels. There's no room for a big underdeck or towers in the design. The Knarr had perhaps a little more room for stuff on deck, since it had fewer oars. Perhaps a hybrid design could work, but the more you expand the engineering, the more people you'll need to run it. Also, all these ships are open (amazingly, since the Vikings had pretty brutal weather to put up with), so shelter will be off the list. Unless you have some magitech ship-to-ship weapons, don't expect this to be a gun boat.

The average speed of Viking ships varied from ship to ship, but lay in the range of 5–10 knots (9.3–18.5 km/h) and the maximum speed of a longship under favourable conditions was around 15 knots (28 km/h).

PS: If you are okay giving up on oars, you might want to check out this question as a source of material on ships.

The speed of the ship would depend on its overall size, but I've seen Xebecs listed as having speeds of 11-16 knots (under sale, rowing would be far slower, to the tune of low-single-digits) for a 35-gun ship with for-and-aft lateen sails and 16 oars/sweeps. As has been pointed out in the comments, 16 knots is REAL fast for a sailing ship, and should be considered the theoretical best-case-scenario maximum speed, with 11 being closer to what you'd expect. (Forgive me, I don't have my books handy to get the exact quote.) This would be a fairly fast ship for its size and probably about what you're looking for. They also tended to have a single deck followed by a hold, so that also seems like what you're after.

The main thing though is that a Xebec generally would NOT use both sails and oars at the same time. The oars are to move when the wind is nil/against you. I can imagine all sorts or problems trying to do both at once, not least the havoc up-and-down oars could make of sails coming around or oarsmen being in the way of sailors trying to do things to the sails. Most dangerous would be trying to turn using the oars, only to find your sail plan meant that you were taken aback at some point in your new heading. On a xebec the masts were usually struck (taken down) when the oars were going to be used.

Xebecs (and your ship) would be faster in the long run because they are independent of the wind. So they could still move toward their destination when a sails-only ship would be becalmed/taking like mad, but could use the wind to outpace a pure "rowing" ship. In a fight however it would have to be one or the other, preferably sails.

You need a small Venetian galeazza 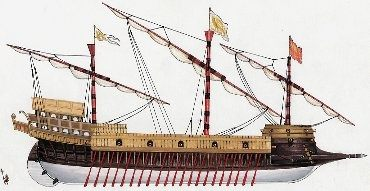 As has been noted, oars and sails are alternatives on the same boat. They rarely if ever work together.

If you sail with the wind behind you then the oars won't be able to keep up with the speed of the boat. If the wind is on the beam, then the boat will be leaning over at a sufficient angle to make rowing impossible. If you head directly into the wind then the sails are not only useless, they are also a hindrance so you should change to oars.

Oars are just like an engine: you use them them when the wind is not favourable.

This is fantasy! Why stick to historical accuracies? Your rower is a giant. He has some unusual traits for his kind which accounts for why he is venturing out into the world of humans. But he is big and very, very strong. He rows their boat like a racing scull.

He does not partake in the stealing or the fighting. He gets left on the boat when they go ashore. Your protagonist might ask the crew why they do not bring him with since he is so big and strong. He could be useful. As it turns out, other people had the same idea in the past. There are several very good reasons to leave him on the boat.

For a fiction this is easier for the writer. A fiction with 100 assorted slave rowers gets tricky - they are all people with agency and viewpoints. It is difficult to account for and characterize all of these people? But your giant is just one entity with a singular point of view. It is much easier to deal with him in a fiction.

As regards why your rower is how he is, and perhaps other characters too, I envision their backstory flashbacks told 1001 nights style, as little breakways in the main story as was done in Moby Dick.

It's a sailing ship with specifically three banks of oars. There are other variants, for example, a bireme which had two banks of oars.

They tend to be single mast though they could have two, single sail, square rigged, coastal ships. Ideal for a fantasy scenario since most non-medieaval myths are set in or close to the appropriate technological window.

Your main consideration should be that it's quite slow, but you asked for slow when you said that oars would be an auxiliary for speed. Later sailing ships didn't have oars because they got too big and too fast for oars to be a meaningful speed boost.

The Adventure Galley as outfitted for William Kidd in the golden age of piracy had both sails and oars. It however required a crew of 160.

At the number of oarsmen you are looking at there is no practical way of moving a ship capable of ship to ship combat. A lighter craft would be possible but there would be a diminished space for cargo.

Figuring that each oar has two persons and that the oars, though possible staggered like a sweep](https://en.wikipedia.org/wiki/Sweep_(rowing)), are matched. This gives four oarsmen, meaning six banks with 24 rowers. The remaining 6 crew being captain, coxswain, helmsman, etc.

I think I've found my best model for the ship I'm looking for, and that comes from the book and movie The Voyage of the Dawn Treader from "Chronicles of Narnia" by C.S. Lewis. 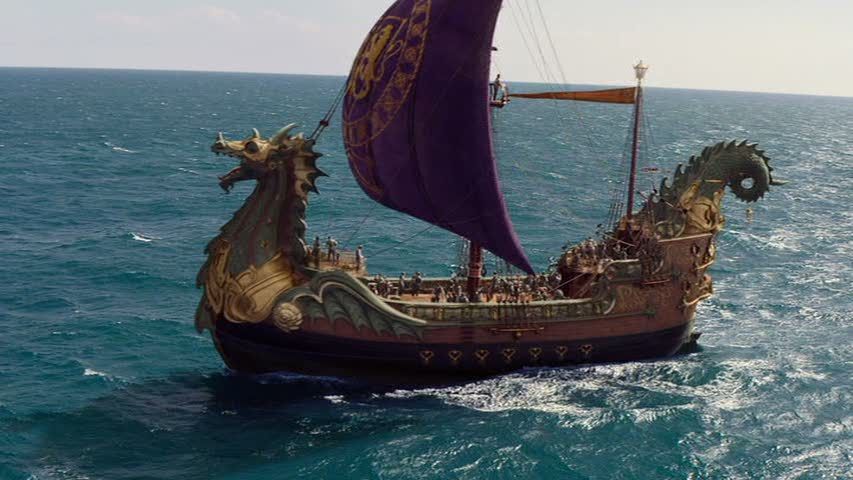 It seems that this single-masted ship is well-suited for a smaller crew. According to this site the ship from the movie was modeled after various British Royal Navy ships while keeping with the single-mast and hull shape of Viking vessels. Another site considers it to be styled as a medieval galleon.

The ship has sufficient cabin space, a nice deck design, and I think could be well-suited to doing stealthy merchant runs. Outfitting it with additional weaponry (crossbows and the like) should be doable, perhaps even the surprise ability to spew something like Greek fire from the mouth of the figurehead.

Chapter 2 of the book itself describes all areas of the ship, including crew hammocks and rowing benches one deck down, with an open area down the middle where provisions are stored. The ship can be rowed when there isn't enough wind for the sail, or if something happens to the mast (as in the case of Chapter 5, when the mast is broken during a storm). I further watched this movie last night and really enjoyed the feel of this vessel.

All in all, this ship feels like the best of all worlds to use a model for my fantasy ship. Of course, I welcome any comments!

6
Trying to Understand the Physics of How a Drillship Could Trap A Giant Underwater Alien Object Beneath Itself
12
How would a sailing ship travel on land?
9
Is there a good reference for the evolution of ships over the ages?
4
Sea-monster resistant sailing ship design
10
Ships suitable to sailing in monster infested fantasy waters
15
Can a low-tech sailing ship tell how deep the water is?
5
How would a wind generating stone change sailing and the anatomy of a ship?
4
Group dynamics, family life and childrearing aboard a generational sailing fleet
17
A Sailing Ship With Cylindrical Sails
3
Sailing Ship Needs to Make a Fast Getaway