What would the sky look like if there were 100 Sun-sized stars exactly half a light year away from Earth?

I'm thinking of a little something where a hundred Sun-sized stars would dot the sky (night or day; the Sun just blocks other stars at day after all). These stars are scattered across the sky, but they are all exactly half a light year away from Earth.

So what would the sky look like in this scenario, aside from the fact that there will be new constellations? Will the nights be brighter? Will these stars be visible at day? Any interesting deviations from the typical sky?

Will the nights be brighter? Will these stars be visible at day? Any interesting deviations from the typical sky?

First of all, take a look at this chart showing how the Sun look like when seen from various bodies in our solar system 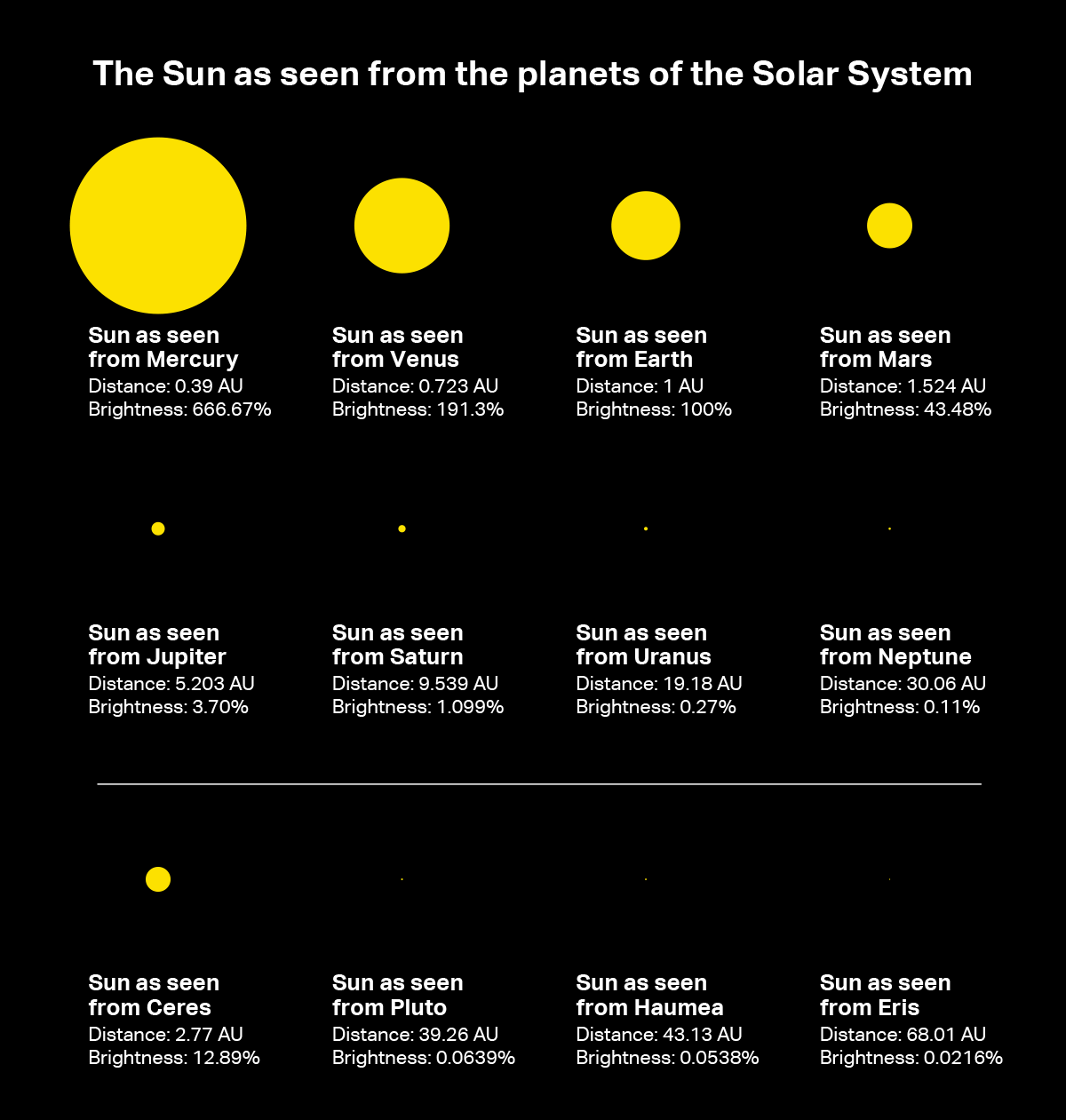 Below another comparison of the apparent size of the Sun.

Just for reference, again from the image, even having 100 sun-like stars at the distance of Eris, you would still get 2% of the light coming from the Sun. And they are much farther and much more feeble.

You would have a sky filled with 101 Venuses

The apparent magnitude of these stars would be just a bit brighter than Venus at its best, less than 10% brighter.

Of course, they would appear in the day, and twilight, and in the darkest night. The nighttime view would be quite spectacular, about similar to looking at the sky over JFK airport during a baggage worker's strike.

I'm surprised no one has given this a more direct quantitative treatment, so here goes.

The perceived brightness at the Earth's surface is related to illuminance, or luminous flux per unit area. Direct sunlight at noon is about 100,000 lux.

For comparison, the full moon gives us between 0.05 and 0.1 lux, and starlight gives us 0.0001 lux. Note that human perception of brightness is logarithmic (proportional to the logarithm of the illuminance).

There would therefore be no perceptible difference in brightness during the day, but the difference at night would often be noticeable, especially during a new moon or when the moon is below the horizon.

Not the answer you're looking for? Browse other questions tagged science-fiction astronomy .

113
What would make scientists realize they were on a flat world?
20
What would the sky look like in the SHADOW of planetary rings?
12
What would the star chart be like if earth had a ring?
5
What would the night sky look like from Luna (Earth's moon)?
12
How close could another solar system be without adversely affecting our own?
0
What would happen if all stars disappeared?
6
What does a gas giant close to a red dwarf look like?
2
Calendar-Worthy Events on a no-axial spin distant future Earth
3
Would a group of Dyson swarms produce a noticeable pattern in a distant night sky?
8
Time scale and mechanism to “realistically” remove Sol from the Milky Way