What would the fighting style of someone wielding a longsword-like arm blade look like?

I have this character who was a skilled swordswoman who fought using a longsword until she lost her left arm in a brutal battle which later replaced with a magical prosthetic arm forged from an indestructible sliver metal called Airgetlám. Airgetlám’s gimmick that with a mere thought, the wearer can reveal its true form: a formless mass of intense light that takes the form of any melee weapon she desires, including swords, maces, axes, spears, warhammers, scythes, flails and whips reaching up to ten meters in length.

However, the form of Airgetlám that the character uses the most is that of a longsword that she fights using techniques akin to German and Italian swordplay. Yet, I have no how such combat styles would translate to a weapon like Airgetlám and whether they would be practical or impractical.

There's a real-world thing called a Pata. It looks like this: 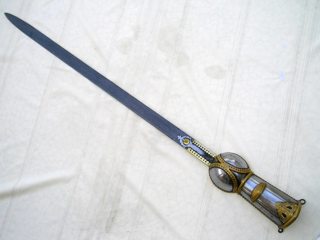 It is, more or less, a broadsword or rapier blade protruding from the end of an armoured gauntlet.

The pata is most commonly paired with either a shield or another pata, though it can also be used with a javelin, axe, or belt. The restrictive handle was particularly suited to the stiff-wristed style of South Asian swordsmanship. Despite its shape, the pata is used primarily for cutting rather than thrusting. The extended grip provided by the forearm permits powerful slashes but restricts any thrusts. This can be seen in mardani khel today and in colonial descriptions which describe spinning techniques with dual pata "much like a windmill".

I wouldn't want to use one myself, but as they were used in anger in actual warfare it would appear that they are entirely practical weapons. It would be most useful for youre character if the fighting style they used before the accident matched well with the new weapon; this is probably not the case for many styles of longsword combat, but that's OK because you get to decide on the history here.

These weapons might be less effective against well armoured opponents... given that they're not so useful for thrusting attacks, even decent chainmail could provide an adequate defense, and there's clearly no scope for half-swording against opponents in a decent suit of plate armour. Of course, if your fictional weapon can transmute itself into any form that's not going to be a problem for your scenario.

I've had a quick look for a video of these things being used, but there's not a whole lot out there. When searching, do make sure you're looking for things with stiff blades as there are a lot of things which people call patas or dandpattas which are actually weirder things like the urumi (a kind of whip sword) with a gauntlet hilt. If anyone can find a good video of one of these things being used, please do share!

I personally would take the giant whip (mine would be 11 meters) because I am that metal. But I am also clueless in the use of any melee weapon and my strategy is that people will run when they see me flailing about my 33 foot glowy whip, screaming Iron Maiden lyrics at the top of my lungs.

Your character is "a skilled swordsman who fought using a longsword". I have to think she will want to use that hard earned expertise, not make a giant whip. When it is fighting time, she will make a longsword that has a reach comparable to her old sword and hand.

Sometimes she might make the giant whip though. Out of principle.