I'm building a world in whose history climactic changes causes a region of desert to start seeing regular rain. This causes the native culture of the desert people to also change along with it, eventually evolving to something akin to the Mongols and finally the Yuan dynasty of China. (Essentially moving from a desert nomad to steppe nomad culture, and finally becoming a full fledged settled civilisation.)

My research shows that this scenario has parallels to the African humid period, where a stronger West African monsoon caused a greening of the Sahara. But nowhere is it mentioned how long it took for the desert to turn green.

My question therefore, is this:

Any help would be highly appreciated!

Areas of the Sahara desert do turn somewhat green after heavy thunder storms which happen occasionally. Within days the desert is in flower.

But with massive quantities of regular rain there would be plants everywhere before long.

Initially there would be plenty of low growing desert flowering plants, cacti and shrubs limited by the amount of nutrients available. But this would attract birds, insects and other animals from peripheral areas creating a thicker cover of vegetation starting from the peripheral areas and working in towards the deeper areas of desert.

This all assumes vast quantities of rain. With less rain less regularly the process might not get started at all or could take any amount of time you desire depending on quantity and frequency.

But with regular heavy rain the main limiting factor would be the availability of nutrients. It would take a long time to establish trees, but within decades the more mobile seeded species could start to appear everywhere carried but birds and the wind.

Concerning speeding up the process, this would depend on the new people being aware of what was happening and the exact amount of rain and its distribution. Assuming they were aware by some means and the rain was less than Amazonian then standard arid land management should be effective.

This involves channeling water run off into a series of plant growing areas with one overflowing into another and by capturing water below ground by use of many small barriers and dams can help prevent rapid water run off. Measures to prevent people chopping down trees for firewood would be needed as well as growing the right crops.

edit: It really does depend massively on how much rain there is both in volume and frequency. With constant regular rain it could tend towards the Amazon encouraging rapid forestation with a massive river system(s) developing from the get go.

With a very wet season and very dry season you could end up something like southern Madagascar with huge rivers such as the Mandrare river (a 400m wide winterbourne) gallery forests around the rivers and drought tolerant thorny forest (or equivalent) elsewhere. 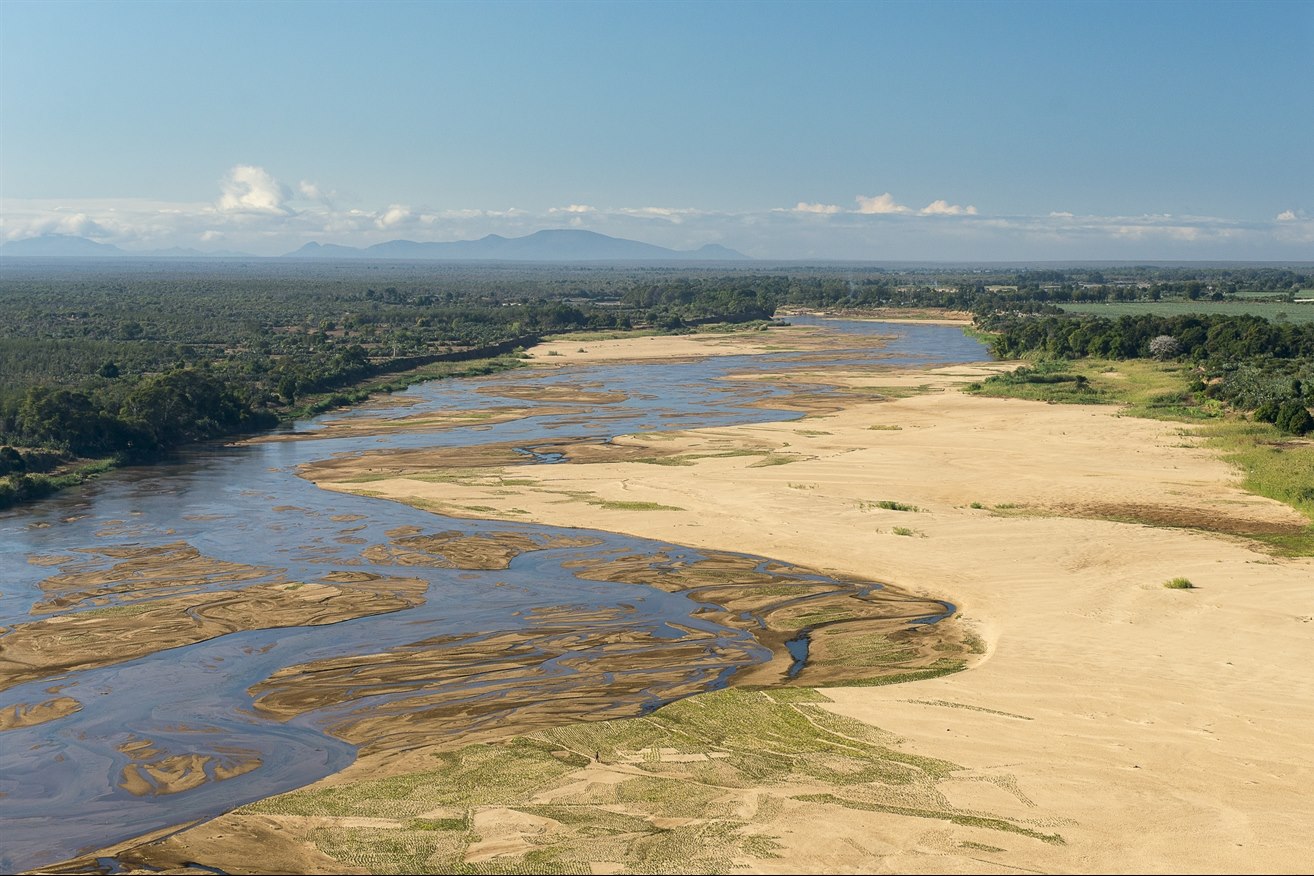 With less regular and/or more modest rain fall many other climatic types would be possible for example any climate type from the bottom of this diagram: https://www.climate.gov/file/holdridge-lifezonespng

I want to expand a bit on Slarty's answer.

First, I'd like to second his emphasis on just how much rainfall you'd need; it's much more than you'd think. Something that most people don't realize is just how much water there actually is in soil. One of the primary reasons that deserts get so hot in the day, and so cold at night is actually because there is no water in the soil. It's just like how being close the the ocean moderates the climate of a region, because the immense thermal mass of the ocean slows down the temperature fluctuation. Well, the large amount of water in the soil actually does the same thing; although not quite as strong as the ocean. The thermal mass of water is huge, compared to most materials. Water has a specific heat capacity of 4,182 J/Kg C, while quartz sand is only 830 J/Kg C. Check out this video of a gardener reviving dry soil; he's not quite starting with completely dead sand, but it should give you a better idea of just how much water is needed.

Secondly, as far as what humans can do to accelerate the de-desertification, again, the primary objective should be retaining water. Extremely dry soil, actually has the counterintuitive property of being hydrophobic (i.e. it repels water). So, in areas with very dry soil, you may get a monsoon, but the extreme vast majority of that water will just skim across the surface, and virtually none of it will get absorbed. What you need is either frequent soft rains, or something to get the water to stagnate (or at least slow down) over the land, to give it a chance to soak through the initial hydrophobic property of the dust, and get into the soil. And even once you have gotten some water into the soil, you need to keep it there. If the air is very dry, it will suck the water out of the soil, and all that water will evaporate and be lost again. Biochar is a very effective method of retaining water in soil, and it can even be done with extremely primitive technology (ex: clay or dirt mounds on top of a wood pile). Basically, you just burn or heat up wood, in a container with zero or minimal oxygen, and it turns into charcoal, but the microscopic structure of the wood is retained, which produces tiny little pockets with immense surface area. You grind the charcoal up into the consistency of sand or smaller, and mix it in with the soil. All these tiny particles act like little sponges, and protect the water from evaporation, thus allowing soil to retain water far longer than normal. Also, biochar has profound benefits for soil health, as it gives micro organisms a safe place to hide, and it can retain soil nutrients to prevent them from being washed out of the soil. When combined with things like rock dust (either natural, as would be present in dessert dust, or manufactured), it can significantly increase the long term health & productivity of the soil, as well as the speed at which a soil can regrow fertility. There are several ancient sites across the world, where peoples were using biochar thousands of years ago. You don't necessarily have to know the science in order to discover that it works.

After water, the biggest thing is getting organic material back into the "soil". A desert has been bone dry for so long, that basically all of the organic matter has turned to dust, and either blown away or broken down into sand and trace minerals. Most plants don't like growing in sand; they need the protection & symbiotic environment of soil, which is largely defined by the presence of organic matter. When you're doing this on a large scale, you really want to get nature to do most of the work for you, so you want to set up the conditions for the ecosystem to build the soil & organic matter for you. One way to do this, is planting trees that are hardy enough to survive the initial harsh environment. If you can get them to survive, their roots will push sugars into the soil to cultivate fungus & bacteria who in turn process the raw minerals and make them available to the root systems. Once you have enough water in the soil, these fungus & bacteria can begin breaking down raw organic matter into soil. China is currently using this strategy to stop "the yellow dragon", a region of desertification that is spreading rapidly across China.

To help this process along, you can bring in organic matter to jump start this process. There are 2 ways to do this:

Finally, another thing to keep in mind, is that once you have done this on a large enough scale, the presence of plants (especially trees), actually starts to produce more rain.

Just a tidbit that might be helpful: beavers can green a landscape !

Beavers protect themselves from predators by modifying their environment. By damming small watercourses, they create large pools of water that they can hide in to reach further food sources. They also dig channels at the bottom of these pools as they repeatedly swim the same route. All of this creates deep reservoirs of water and wetlands which can weather droughts where a seasonal stream would dry up, allowing more vegetation year-round. This has the potential to create a chain reaction in a watershed. The new ecosystems would also present new food opportunities for cultures in the vicinity.

I can't find the exact video I saw on the subject that really made it click for me, but here's a nice outline of beaver lodge construction and a vid on beavers' effect on desert.

If your world has the same animals as earth, you could consider adding in beavers as a passive regreening process. Or, you could even draw up some other fauna that have similar effects.

Not the answer you're looking for? Browse other questions tagged science-based geography worldbuilding-process climate-change deserts or ask your own question.

8
Is it possible for a temperate forest/freshwater area to form within a desert?
7
Garish colors for vehicles in desert warfare operations
4
Preparing human colonists for a desert planet with a red giant
33
If a patch of desert were magically displaced to the middle of a forest, what would happen to the whole forest after certain periods of time?
5
How to get rid of the rainforest for a desert moon with only habitable poles?
2
Damage estimate for a large acetylene explosion
2
Optimal tracks/treads for Desert based tank
15
Are snow caps plausible for a mountain range in an extremely large desert?