Physical explanation for a permanent rainbow

I am trying to create a world where, on a Earth-like planet, a certain area experiences a peculiar phenomena: year after year, in a given period of the year, for a certain number of days (greater than 1), they uninterruptedly see, from dawn till dusk, a rainbow in the sky.

In the early stages of their development, the inhabitants of this area took it as a sign of the place being blessed by the divinity, and therefore settled there.

However I am interested in understanding if there is a (set of) physical phenomena which can explain that permanent rainbow.

The rainbow shall be visible against the sky, so I am ruling out explanations like "there is waterfall".

A rainbow as we know it is due to refraction of sunlight (or other continuous spectrum, nearly point-source light) by large number of water drops (typically either falling as rain or from a sprinkler system, but it can also happen with clouds). The rainbow forms a circle at 49 degrees angle from the antisolar point -- which we normally see as an arc, interrupted by the ground, but from an airplane or mountain top it's sometimes possible to see a full "glory" -- a circular rainbow.

A mountaintop with reliable cloud cover below and clear sky above would be an ideal place to see this. A glory will be visible in clouds below the observer when the sun is above, providing the water droplets in the cloud are in the right size range and sufficiently uniform in size.

There are mountaintops on Earth (the Pali on the Big Island of Hawaii is one place that comes to mind; various peaks in the Alps as well) where these are common. All that's required for them to be everyday is sufficiently consistent conditions producing the right water drop distribution. 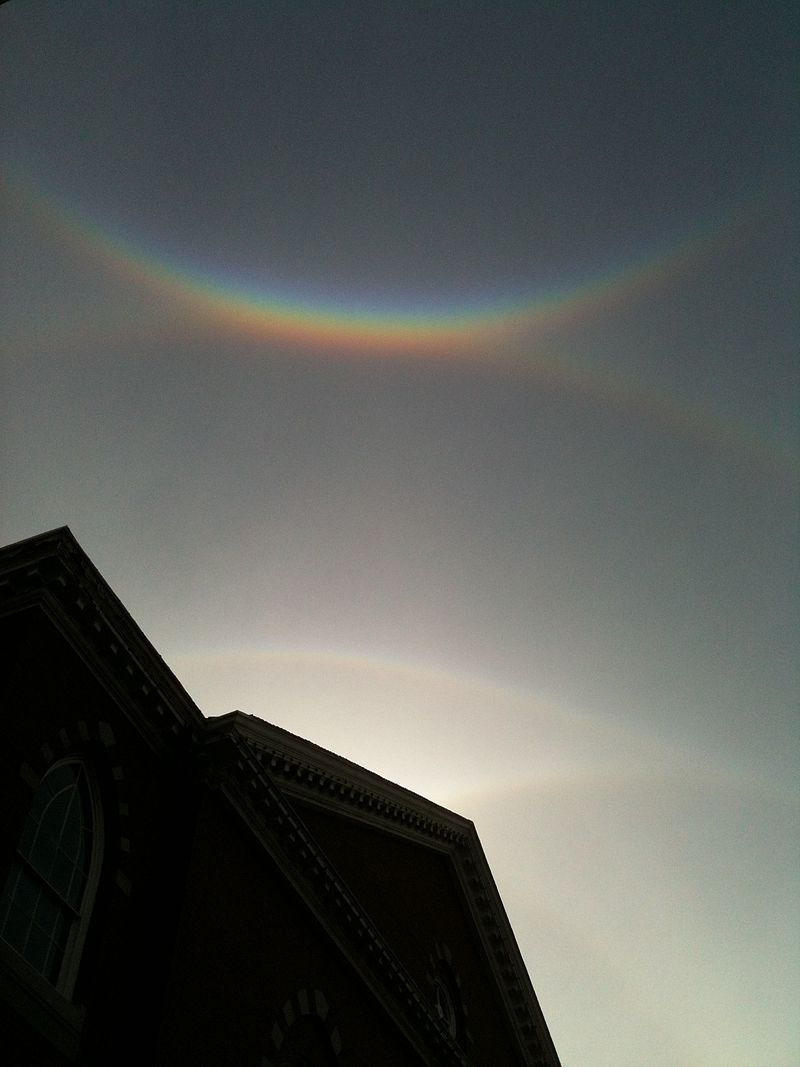 Your planet has a Saturnine ring of ice crystals. Just as ice crystals high in Earth's atmosphere can produce rainbow effects, when the angle of the sun as relates to ring and viewer is correct the ring will appear as a rainbow to persons on the ground.

I'm gonna go with a different answer here, and that is:

Psychedelics in the water / air / land

Is it unreasonable? Not necessarily. There are over 200 species of fungus that produce psychoactive amounts of the hallucinogen Psilocybin, and those species are found all over the world! The spawning period of this mushroom just so happens to be very regularly timed to one period of time during the year, where spores are released containing the psychedelic.

I'm going to go ahead and rule out any earth species of mushroom, as stated in the question, the planet is not Earth, and as such isn't likely to have any of earth's species. However, there is plenty to take inspiration from, such as the tundra-inhabiting Gymnopilus, to the tropical Psilocybe.

Why would mushrooms evolve such psychedelics on another planet? Easy. The psychedelic effect is meant to keep animals and humans close to the fungi, as any creature which passes away near the organism will inevitably become food for it.

Is it possible to 'huff' a psychoactive dose of Psilocybin? absolutely. The active dose is as low as 1mg, or about 1/4 of a grain of rice. I'd wager a bet that the average person inhales 10x more in dust every day.

Rainbows be the blessing of Prisms

So we need something glassy in the atmosphere, at least during sunlight hours, for at least a single day.

1. The planet has an eccentric orbit

So much so that during the height of summer the atmosphere is just about swimming in humidity due to oceanic evaporation. For a period during high summer, it's consistently high enough that it can't drop enough at night to avoid the rainbow at dawn. This would likely cause better-than-average storms, too. But let's ignore those. Maybe your people live in what at all other times of year is a desert, so the storms are minimized. It would also be a period of lush growth — but not quite enough humidity to encourage rain. Tough balance.

2. When a particular species of tree blooms, it releases moisture

A similar effect could be achieved with spring respiration. As part of the tree's/bush's reproductive cycle, it dumps a ton of moisture into the air. When the sun's up, of course.

3. Or maybe that tree's pollen is translucent

Or the pollen or seeds could be crystalline or be surrounded by a sheet of translucent gooey substance that would encourage germination once a seed hit the ground. While in the air, it would serve the same prismatic purpose as water.

4. How about a fine mist of a meteor shower?

Earth has its fair share of predictable and periodic meteor showers, why not your world? The difference is that this particular meteor shower is the result of well pulverized mass that has a very high water content. Rather than resulting in lovely streaks in the sky, it results in high upper-atmosphere humidity. The rainbow isn't so much a bow as it is a ribbon, but just as prismatic.

The sun is moving in an arc. Depending on year and latitude, it could be from less than 1° (just below the polar circle in midwinter) to 360° (polar summer).

Natives will see the rainbow if the sun goes over their heads into some particle cloud that refracts light. So for the rainbow to last all day, the cloud needs to be an arc around the natives, as wide as the Sun's arc.

In theory, it would be enough if the cloud moved around the inhabitants. I can't think of a mechanism that would do that - maybe others can. Barring such a mechanism, this limits the arc to a maximum of 180 degrees - at that point, you'd have some permanent cloud front and the natives living on the edge. Doesn't quite fit your requirement that it's a single location, the phenomenon would be visible along the whole edge. So you're restricted to some area where the Sun is describing an arc considerably less than 180° - maybe 90°? And it would have to be winter so the sun isn't up for more than 12 hours and you can't have that "all day" phenomenon anymore.

With that, I arrive at this scenario:

There's a fog-filled area. Accessible from just a single point, otherwise there will be too many points where you see the rainbow just for a short part of the day. A peninsula, maybe, and non-navigable waters at the border? Or maybe it's in a valley and accessible through just a single pass? That point gets Sun all day (if the weather is right- there are regions where the weather is actually predictable), and the Sun goes up at the 4-o'clock position and down at the 8-o'clock position, with the valley or peninsula opening across 10-o'clock to 2-o'clock, with the rainbow going up, around and down with the Sun.

It's a pretty specific scenario, and it strongly depends on where the natives can move, i.e. their technological abilities - the whole thing will be totally demystified as soon as the first balloon goes into the area.

If you aim for a stationary rainbow, that would require a light source that's brighter than the Sun. This could happen in scenarios where artifacts of a high-tech civilisation still function when lower-tech natives move in, but I doubt that's the scenario the question was asked for ;-)

All these answers are good, but let's get a few out-there ideas with a different slant. While cyclical predictable weather seems fairly plausible, light and heat can also follow cycles.

It can also have the feature of the eruption at fixed time intervals which would fit your requirement.

Not the answer you're looking for? Browse other questions tagged science-based earth-like atmosphere .

4
Explanation for the creation/existence of a secondary physical space that experiences time differently
11
What earth conditions would make a permanent bronze-colored sky?
7
Time duration for development of different physical attributes
4
What conditions would make a permanent turquoise sky?
8
How can a world have permanent cloud cover?
5
How can a world have permanent dense fog?
8
What stars and composition of gases should my planets have to have a sky for each colour in the rainbow?
6
Possibile explanation for a [somewhat] realistic floating continent scenario?
3
Scientific explanation for rainbow fire or sparks from a biological entity