Working on a sci-fi project, similar to well known properties, in which real world road maps play a role, but need to justify them in world on a planet where people don't build on the surface.

I have entertained the idea of

None of these quite work. Does anyone know any other reasons why roads or road like formations might appear on a planet's surface?

The planet is a remote, outer rim space pirate haven loved also by the cartels for the presence of a rare mineral that is created by some of the local fauna. Said fauna prevent people from settling on the planet's surface, and yet there are 'roads' present. Desert in appearance, and made nearly inaccessible by an asteroid cloud. 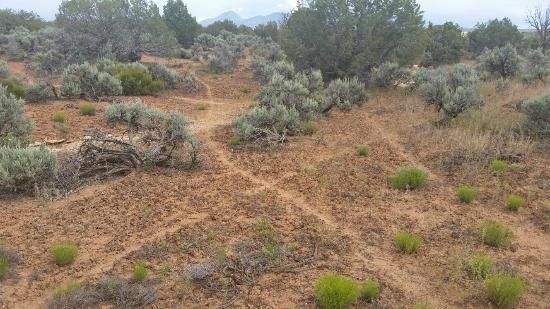 Animals will often stick to trails. It makes sense in a place with a lot of brush or with uncertain depth of snow or water - if you walk where other things have walked it might be easier. The depicted trails though offer no particular advantage except they might be the shortest path.

Large animals can make large trails. One can find a lot of copyrighted photos of the Okavango delta where elephants and hippos make big trails that are then used by other animals. I read that in the late 1700s there were well beaten trails to salt licks in Kentucky - at that time in use by bison and smaller creatures but used farther back by Pleistoscene megafauna like mastodons.

These beaten paths were often the ancestors of roads - they are easier for humans to take too although not necessarily the shortest route between A and B. There is a great poem about this for those inclined: https://poets.org/poem/calf-path

In any case - your "roads" are the ancestors of our roads. Calf paths.

From a body such as Europa. In this figure the features are 200 yards per pixel, so these are unusually large "overpasses", but you could handwave about different conditions of gravity, tide, water temperature etc. giving to-scale results. 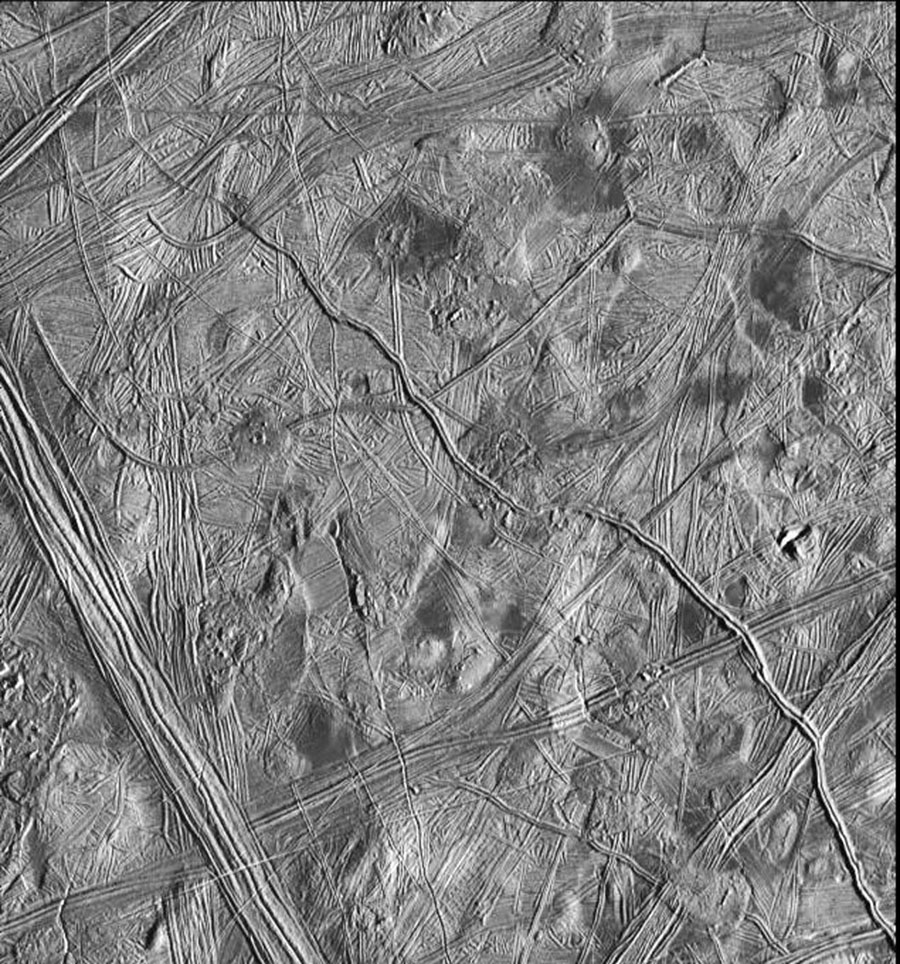 Don't bother to explain them.

Chekhov's Gun suggests that unless the explanation is important later in the story, don't bother burdening the audience with it.

Here's an example of something relevant to your question that is never explained from Arthur C. Clarke's Childhood's End (1953)

And far, far away on the horizon was something that was not of Earth-a line of misty columns, tapering slightly as they soared out of the sea and lost themselves among the clouds. They were spaced with perfect precision along the rim of the planet-too huge to be artificial, yet too regular to be natural.

You can see that in this case the author was deliberately ambiguous about the origins.

Maybe your patterns are roads, maybe they are not. Maybe your characters simply don't know their origin. Maybe some cultures take them for granted. Maybe other cultures worship the "path-makers." And other cultures deny the patterns exist at all. And yet other cultures labor to eradicate the ancient evil of the "devil roads".

Perhaps mad scientists claim (falsely; they are mad) to know the truth behind the enigma.

And perhaps the poets --who claim them to be a work of art-- are closer to the truth than anybody else.

Wash your hands. It's time for dinner.

Depending on how much water is now present on your planet (you mentioned in the comments that the planet is currently desert-like), dried out rivers like those which appear to be on Mars could create something like road networks.

Walk without rhythm, it won't attract the worm

In the Dune series of books, there are giant worms that traverse the world a la graboids. They are called 'sandworms' and you can read more about them on the fandom wiki:

Sandworms lived beneath the sand. Attracted to rhythmic vibrations on the surface, they would breach in pursuit of the origin of such vibrations. This was an effort to defend their territory, of which they were highly protective. Thus to see a worm, and live to tell about it, was extremely rare, save for the mysterious fremen, who had achieved some kind of mastery over the beast.

Their skin was thick, rough, and orange colored. It served the simple function of armor and was comprised of many scales, each a few feet in size. These scales overlapped and interlocked to form the armor that protected it against internal sand invasion.

As the Fremen discovered, this armor, while all but impenetrable, could be exploited. By prying open the edges of one or more of the scales, the integrity of the armor would be compromised; sand was now free to enter into the sandworms softer insides. This would cause intense irritation for the sandworm. The beast would then roll itself until the prone scale was at the highest point from the desert floor, thus minimizing the amount of sand that could enter.

A fremen poised to "ride" the beast as it rolled its open scale towards its highest point could literally mount the worm. As long as the scales remained open, the sandworm would not submerge. Maker hooks were then placed towards the front of the beast to control lateral movement. As a result, wormriding became a viable, even sacred, method of transport for the Fremen across the surface of the planet. Indeed, distances were even measured in "sandworms", the distance one could ride a worm until it was exhausted and allowed to submerge. A 20-worm ride would be a far and difficult journey.

Some worms in the books are 450 meters long (a bit over a quarter of a mile). Any being that large that spends its time tunneling through the earth close to the surface will leave marks. In fact the ground is very likely to collapse around those tunnels; if the collapse is either shallow or old then the worm's trail would look different than its surroundings, effectively looking like a primitive road if seen from afar.

Well then, my friend, I have my answer, from the writings of Phillip Pullman. You see, he had the same problem with his natural roads, and as an answer, lava flows. If you can explain a peculiar amount of volcanic activity, then you could easily say that these roads are simply cooled down remnants of lava flows.

Sailing Stones (https://en.wikipedia.org/wiki/Sailing_stones) are one option.

These are stones which move around on a flat, flooded surface such as a desert floor, when the conditions are right (high wind, freezing temperatures). They leave behind trails as if the rock had dragged itself.

Since they're driven by Ice Shoves (https://en.wikipedia.org/wiki/Ice_shove) there's a limit to the size of the rocks involved, but having some large enough to make a reasonable road-sized line should be possible with rocks wide and flat enough. It just needs a large enough ice surface floating over the water and shoving the rocks. 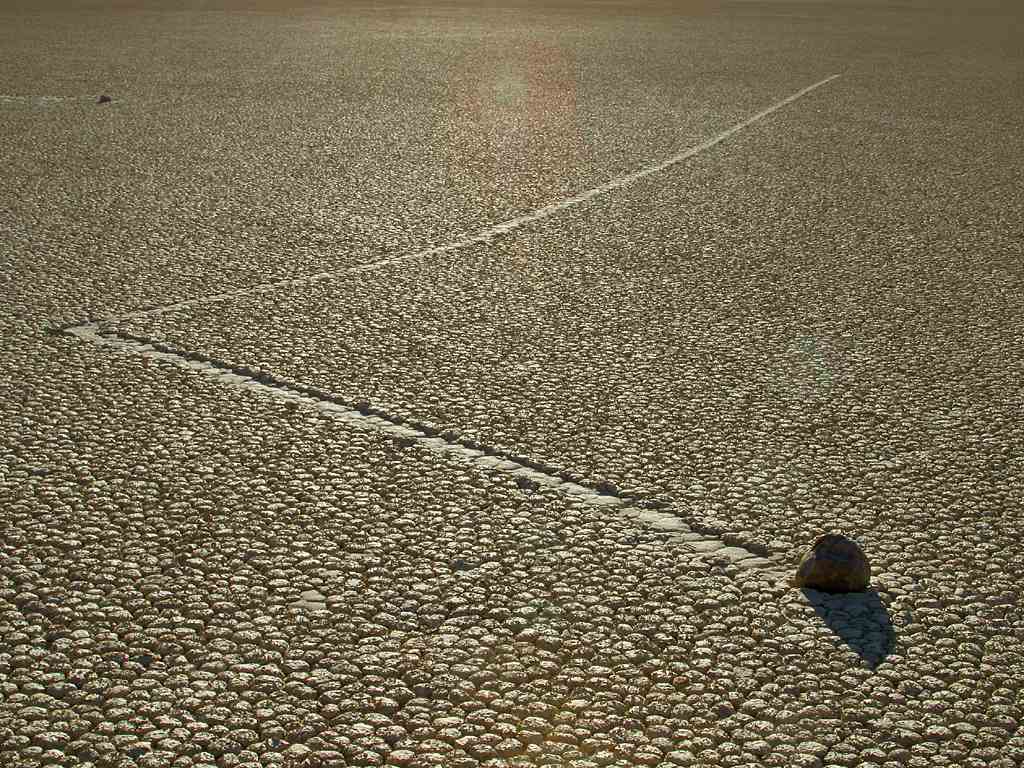 If you specifically want natural structures that resemble modern paved roads, you could use lava flows. Under the right conditions, volcanic rock can be quite similar to asphalt.

How about... optical illusions and telescopic artifacts? Just referring to https://en.wikipedia.org/wiki/Martian_canal

At the end of the 19th and in the beginning of the 20th century, it was believed that Mars had canals, because long, elongated structures were seen on it's surface.

It turns out that this was a combination of wrong translations of the word 'canali' in combination with bad lenses (well, worse than we have today, anyway) and the cognitive effect that our mind wants to see patterns — even if there are none.

I for myself find this a fascinating story.

I do not know how this could fit into your project, but I would just like to offer a non-material alternative to the other proposals.

Imagine a small plant, similar to grass, but has a root structure that stops any other plant life from growing in its vicinity. Perhaps the roots emit a certain kind of poison , toxic to other plant seeds.

Animals will naturally make tunnels through underbrush, and while doing so, they will gather some of the seeds of this plant on their fur. As they travel along the paths that they make, the seeds will fall off along the way, taking root and driving out other plant life.

Animals clear out the underbrush by breaking it apart as they move through it, and the plant makes it so that no new growth takes its place

At first, the plants might not make that much of a significant difference to how clear the path is, but as more and more animals take the same path, they spread more and more seeds along the same ground and clear out more of the other plants that grow along the side of the path. This benefits the animals, by giving them easy transportation, and it benefits the plant by spreading its seeds along new paths.

Over time the most widely used pathways could become long, twisting stretches of green carpet, cutting through dense forested area, with smaller pathways diverging away from them like a natural highway system.

This theoretical plant does not take over the entire world because of the fact that it is relatively weak, and relies heavily on animals constantly replanting it and maintaining the roads.

Well based on your comment about it being a mining planet would ore veins work? It may not be super realistic with earth ores but with different geologic conditions i see no reason why an ore could not have a spiderweb of veins close to the surface.

Not the answer you're looking for? Browse other questions tagged planets science-fiction or ask your own question.

14
How can the intelligence of a super-intelligent person be assessed?