What Is the Most Efficient Way To Kill An Evolved Chomper?

This question was inspired by Defending Medieval Villages From Gluttons and Savages (please look at that question, it'll be a great reference) and covers Nosajimiki's great point:

"Your monsters are unkillable with medieval technology

The impact toughness of tooth enamel averages about 4 MPa. Modern medium carbon steels generally have an impact resistance of 200-1000MPa, but the stuff knights wore would have been of a lower quality than modern alloys (probably closer to 100-200MPa) and it was about 1.5-3mm thick.

This means that your gluttons have 56 MPa armor, but at ~50mm thick you are looking at something roughly 7 times as difficult to penetrate as a Knights armor, and as is, knight's armor was impenetrable by medieval technology. Nothing short of a renaissance period cannon (not musket) would stand a chance of taking down a glutton.

Savages are even worse at 112 MPa. Their shells are as tough as a lot of medieval steel, but it is about 75mm thick! Savages would be almost as hard to take down as a Civil War era Iron Clad. This means even if you give your peasants the best cannons available at what would be considered the very end of the medieval period, they would still be unable to kill a Savage."

Thus, a good way of killing these monsters must be found. I have a few ideas, but nothing concrete:

Chomper shells can be dissolved by acid (see this link for more on that) and of course, since it's organic, lye should be able to eat through it. However, before the modern age, lye took quite some time to make. Also, it would take strong acid, like "eat-through-steel" acid, to do that sort of damage to a Savage or Glutton.

Fire can disintegrate human teeth, so it can harm either one of these monsters. Their layers of protective blubber would likely make fire more effective by trapping heat inside them, so that's another good point for fire.

Ice tends to make things brittle, and ice cubes, due to their cold and brittle nature, can actually crack and therefore weaken tooth enamel. In fact, ice actually dulls objects that strike it, which is why you shouldn't put ice in your garbage disposal. That being said, the blubber of a Savage and Glutton should protect them from ice.

Self-explanatory; Savages and Gluttons may be intelligent, but that won't save them if they fall off something high enough. That being said, I have no idea how to determine the fall height necessary to actually kill either one.

Whether covered in armor or chitin, both Chomper evolutions are vulnerable to a sharp enough blade in the right spot. Such a blade would have to be thin enough to fit through the chinks in their armor/shell, long enough to penetrate the protective blubber layer and reach a vital organ, and made of material durable enough to last against either caustic or acidic bodily fluid. A javelin perhaps? I'm not sure such a blade would be feasible.

Using hook-like blades to pry armor up and off sounds good, but doing that on a struggling, intelligent, mobile monster doesn't seem feasible. Prying up armor plates enough to enable one to thrust a spear into a Glutton or Savage, however, seems like a good strategy.

Gluttons and Savages both need to breathe, so they can be suffocated and drowned. Their enamel armor will probably make them quite heavy and therefore make it hard (if not impossible) for them to swim. Gluttons, due to their extensive blubber and large stomachs, can probably float if they want to, just like armadillos, but that would require them to gulp down and hold large amounts of air inside them.

Chompers, due to magic and hunger-driven natural selection, can eat practically anything (even garbage) and sense it (smell, see, magically detect, etc.) if something is inedible and/or poisonous them . Their evolutions are the same way. The only real way to poison them is a compound poison, multiple substances that react and make a poison once ingested and blended together by the natural mixing that comes with digestion.

So, You Have Solutions, Why Do You Have A Question?

My question is What Is the Most Efficient Way To Kill An Evolved Chomper?

How would a large group of people defeat an egg shaped bad guy the size of a small car?

By digging some holes: 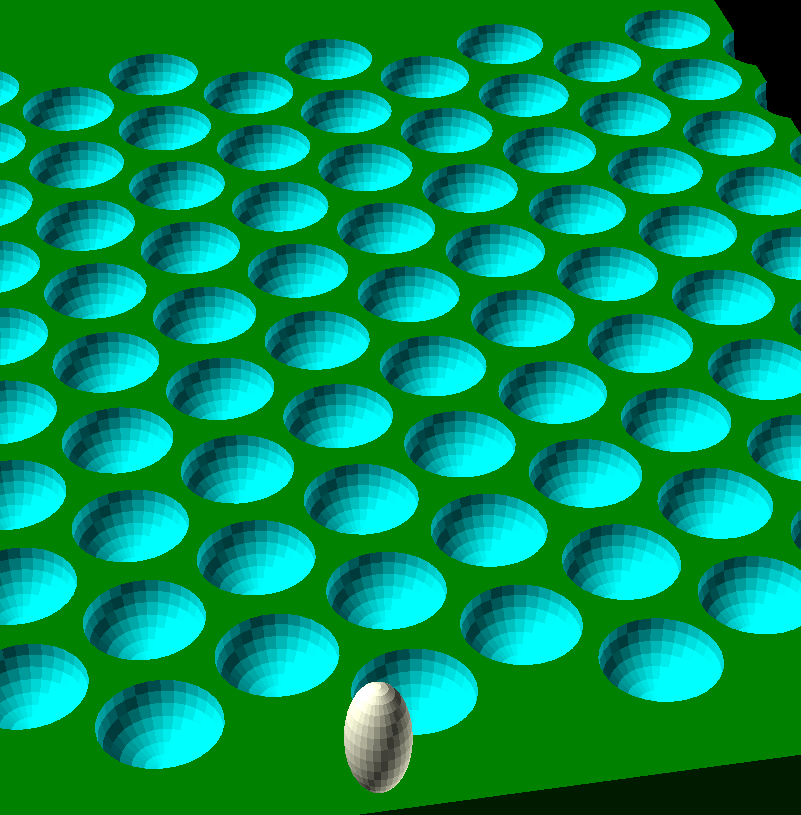 Things wont work out well for the rolling egg, as it requires significant force to climb up the pit walls: 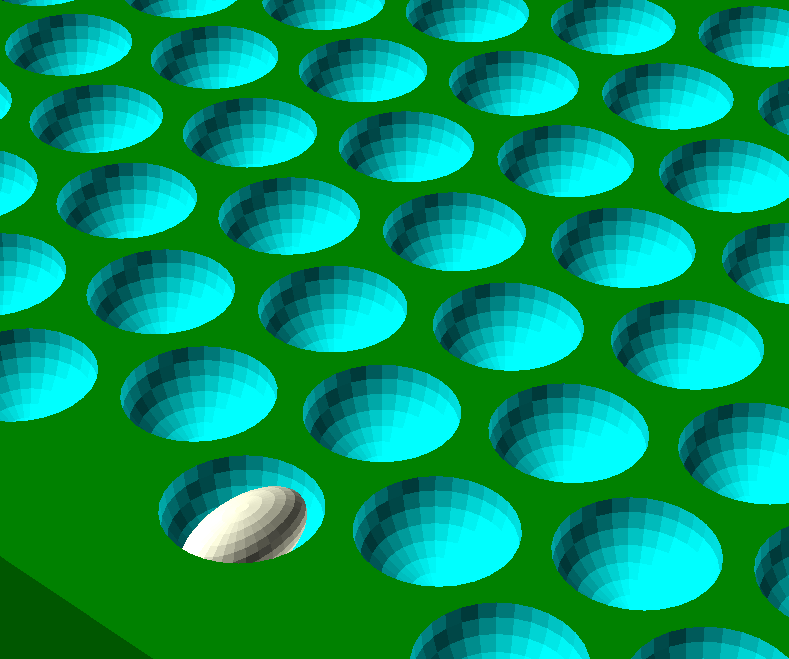 People can walk around these holes quite easily.

I drew a lot of holes but depending on how good their balance is you really may only need to dig 2 or 3 rows.

You can put some planks over the holes if you need to get wagons in on the odd occasion you need to.

Okay, this place has some pretty nasty monsters, but dude, have you seen the plants? 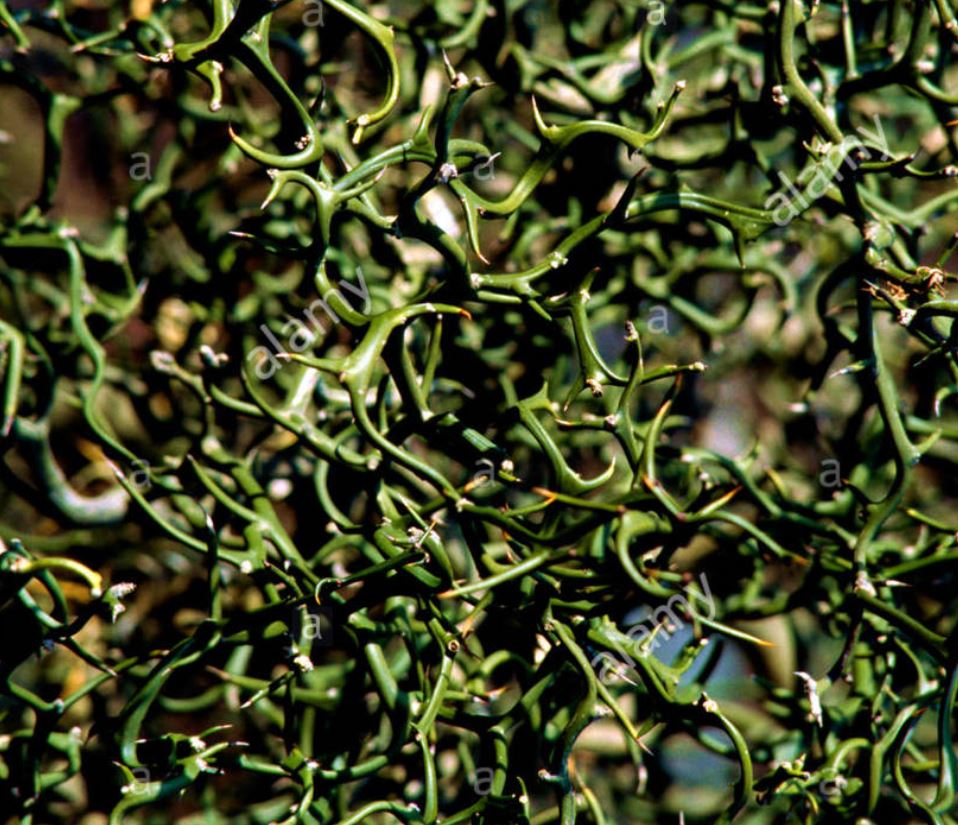 Having had enough of armored herbivores and bulletproof slugs, the local brambles have evolved into something truly next-level: an 8 feet tall mass of razor sharp hooked spines held together with stems tough yet flexible enough for someone to fall into it. But the hooked spines mean they'll never get out.

After some sadistic kids got into throwing Plops in there, a small proportion of the brambles have also become Rubberized. That makes the spines harmless, but the elastic stems got much better at strangling.

It is an ideal habitat for all sorts of creatures, most of them insects, lizards and rodents tiny enough to slip through the vegetation, and of course the many sorts of snakes that eat them.

It is said the plants use the corpses of whoever gets caught as fertilizer.

Creatures with sucker feet or tentacles cannot walk in this mess, as their feet would get tangled, punctured, and hooked in place. With heroic effort, and if they managed to manufacture shoes, they could use their claws to cut a way through, but there is nothing of appetizing size to eat in there, so why bother? And if you advance through it then manage to turn around, unless you cut a very wide path, you will notice the spiny tangle has closed behind you and you have to cut your way out again.

This is quite simple to cross for humans with equipment: just throw some planks over it and walk. But for monsters who can't use fire, it's a different story.

Humans would would then simply grow these around their villages, with a bridge to pass over the mess. The bridge can be built not strong enough to bear the weight of the large monsters, which means they will fall into it should they attempt crossing.

They carry a thick and heavy armour. Even the strongest muscles will eventually tire.

Humans are good enough at running to run bison into the ground.

A lone Glutton/Savage will pursue a human till it gives up. Perhaps they pick one off, but most of the humans escape.

Alternately they pursue the human till it gets itself exhausted - the human is an experienced runner and still running circles around it. Now the tables turn. The runner keeps egging the creature on to pursue it, to keep it exhausted. The creature might be smart, but its inexperienced, its instincts either cause it to retreat, or to attack, not suspecting the change in fortunes.

Meanwhile a squad or more of armed men noticeably slower but marching quickly to catchup arrive. They carry heavy nets, metal clamps, irons, and a map to the closest killing ground. They quickly overwhelm the creature using tactics and their comparative freshness. They use this opportunity to manoeuvre the creature to the killing ground where all manner of interesting crushing devices, a very deep pit, or a pool of water with a lid exist (or some other in universe killing technique, like using the shells of previous killed/dead creatures to fashion weapons).

A pack of these creatures will overrun a village, or town. It takes time to build defensive structures, and the kind needed here will likely require experienced craftsmen. Which requires a city.

To get to city-hood, villages organise signal towers. An attack will be noticed and the signal fires lit. A bell rings through the village. Everyone wakes up, and runs away from the towers that are lit. In the daylight the town people organise runners to egg the creatures away from the village. They employ tactics to drive the creatures away, hopefully to a pit or other basic killing trap.

Slowly the population grows. The Network of towers grows with it. Some bright spark figures out how to make two kinds of signal. One to signal danger, the other to relay to the town centre the danger to call up reinforcements. A good defence, prevents them from getting to your doors. Farms will get destroyed, towers too. But the warning is enough to deploy skilled runners, and skilled men at arms.

If the creatures figure out how to sneak past the lookouts before the town reaches city-hood it'll be a terrible massacre and the likely result is that the town will fall.

If however through diligence, and a knack for forcing these creatures into traps/sub-optimal terrain kills enough of them to keep their knowledge level low, this can be an effective way of keeping an area safe. Or at least safe enough for enough humans to become talented craftsmen capable of constructing the kinds of obstacles, and on the spot killing devices like cannons capable of being used to defend a location outright.

Not the answer you're looking for? Browse other questions tagged low-fantasy or ask your own question.

3
Gaining The Predatory or Gluttony Enchantment
2
Defending Medieval Villages From Gluttons and Savages
1
Making a Predator For Chompers
1
How Dangerous Are Evolved Ploppers?