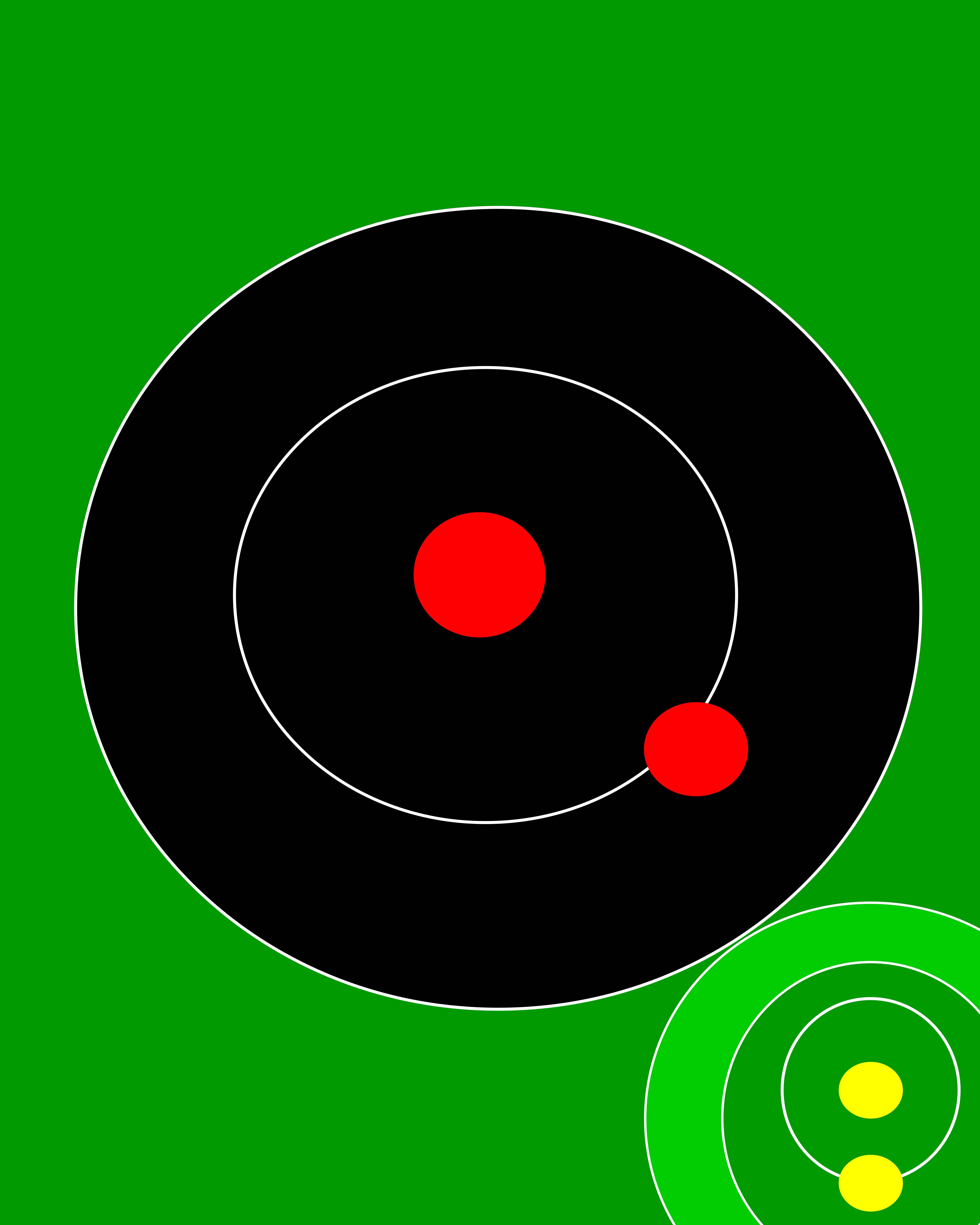 Presented here is a quaternary solar system consisting of two binary orbits. One consists of two red giants, each one 100 times as wide, one-third as massive and 100 times as bright as our sun. Both stars have been red giants for only 12 million years. One giant is orbiting the other giant from a distance of 12 AUs. The other binary consists of two yellow dwarves, each one 105% as wide, 110% as massive and 126% as bright as our sun. The one dwarf orbits the other from a distance of two AUs.

No habitable zones at all.

Consider a habitable zone. It receives enough radiation from its star (or star pair) such that water does not freeze or evaporate.

The "Habitable zone" concept becomes "The collection of all habitable orbits"

The habitable zone is a simplification depicting 2 circles around a sun (or barycentre of N suns) representing the boundaries on the possible orbits that could sustain life: 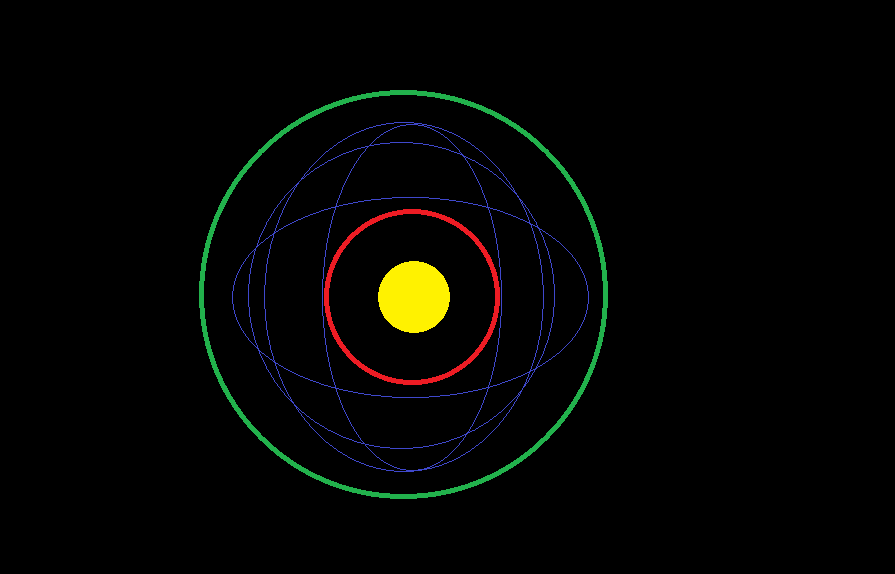 By defining the red and green circles, all those blue orbits (and infinitely more) are defined as "habitable"

This concept only applies to your 4-star system in three very special cases:

When the suns are really really hot and the habitable zone is very far away from your diagram, you get a really zoomed out version: 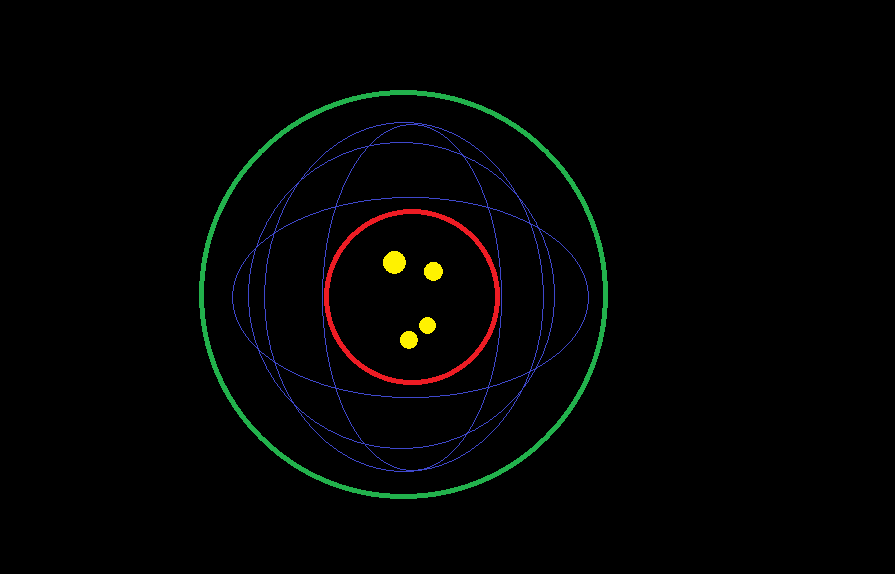 When two of the suns are very far away that they don't contribute much heat and can be ignored: 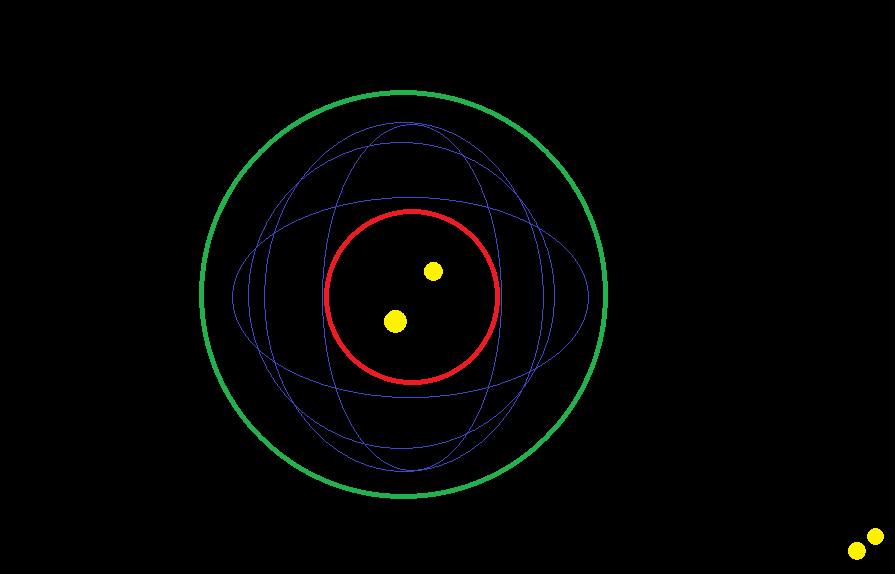 Or when the suns are weak, and the planet's atmosphere is thick and an extreme insulator that can hold heat for a full year (think venus here), you can theoretically have nested rings of habitability zones depending on the temperature gradient: 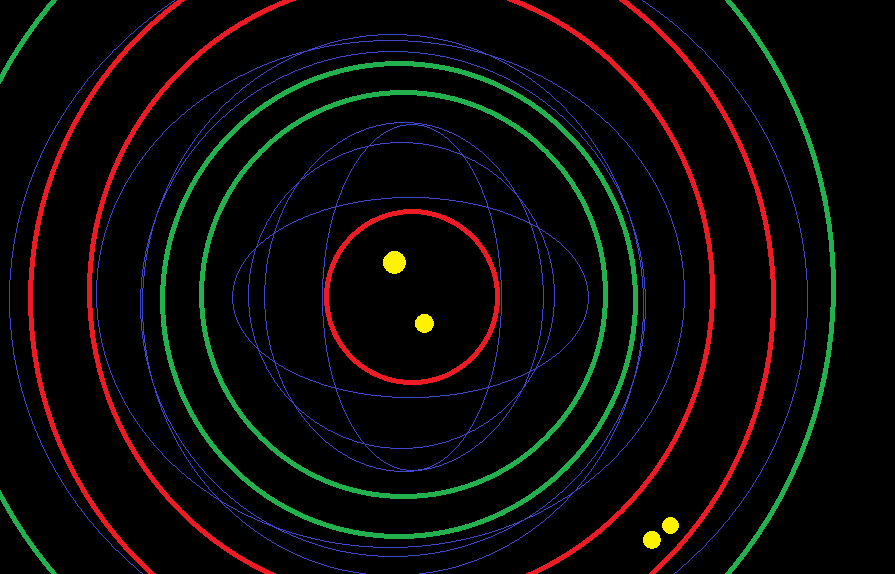 However none of these special cases probably apply to your system, your habitability zone probably can't be described using radii alone. 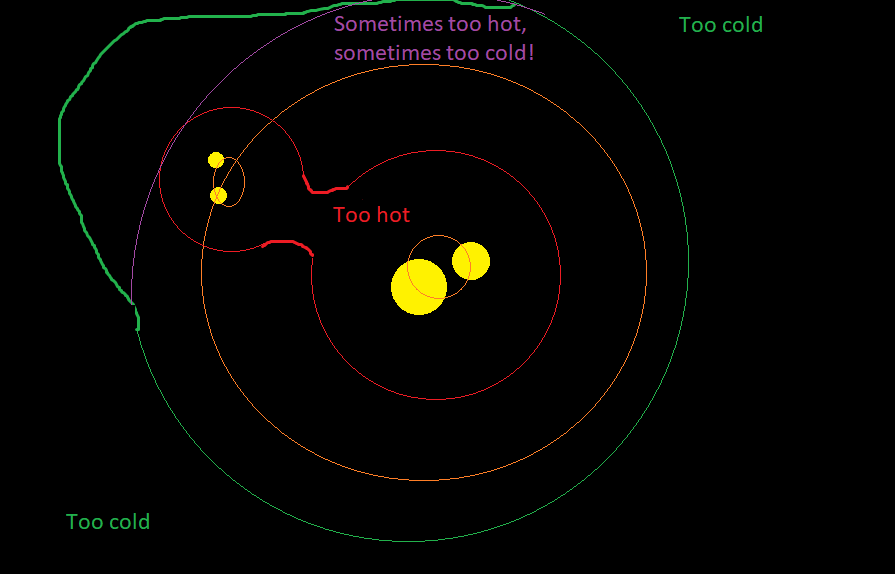 There is no single radius circular orbit that stays between the too hot and too cold mark.

There are still infinitely many orbits - including lots of elliptical ones, and circular ones with a specific phase, but they all have an orbit with the same period as the other sun pair, eg:

This ensures that the planet never cross the red line on its orbital ring. The 5 most stable (and I use that term loosely) of these are the Lagrange points:

Assuming the blue and yellow spheres in this diagram are your sun barraycentres: L1 only is a habitable orbit if your suns are weak enough / far enough away from each other, the other 4 are some of the habitable orbits.

I think you should go with a superposition of the amount of received energy to determine the habitable zone in the system as a whole.

Let me explain my reasoning with a simplification: if an habitable zone is defined as the region of space where the total amount of radiation received by the outside is between 80 and 120 units, that has to be the total of the radiation coming from all the stars. In your case you would consider only the 4 stars of the system, given that the contribution of the others is negligible. If a certain location in the system receives in units 60 from A, 40 from B, 20 from C and 10 from D you can quickly see that it all sums up to 130 units, out of the habitable zone, unless for those moments where B or D are eclipsed.

In a very 0th order approximation, I think that either the overall habitable zone would be pushed outward with respect to the habitable zone of every star taken individually, or there can be no habitable zone at all, considering that the superposition can exceed or not meet the habitability score depending on the relative positions of the stars.

I think it has as much to do with the previous answers of 'add up all radiation' as to your definition of 'habitable'.

If you're talking about current day humans being able to survive there then look at the other answers (practically no chance). However, things change for bacteria or Tardigrades, which have a much larger bandwidth for habitable. Then after that imagine things like alien lifeforms, like silicon based biology or an intelligent robot civilisation just requiring energy and materials for operation and replication.

I think that the closet thing to what you are asking for is if a planet orbits just outside the habitable zone of class K or M star, and so would have a temperature slightly below the freezing point of water.

But the star the planet orbits happens to orbit a more massive and more luminous star at a relatively close distance. The distance between the two stars has to be at least several times the distance of the planet's orbit around it star, but also small enough for the planet to be almost within the habitable zone of the larger star,so that the combned luminosity of the two stars suffices to make the planet warm enough for liquid water and life.

And it is possible that such an arrangement with the brighter star a spectral class G or F, and the smaller star a spectral type K or M, might work. And if it won't work with one brighter star, it might work if there are two brighter identical stars, a close binary. A binary of identical stars which has twice the luminosity of single star of that type would have have an outer edge of its habitable zone about 1.41 times as far as the outer edge for a single star of that type.

There's no such thing as a habitable zone.

Well, OK, there are those ten thousand astronomers publishing their belief in it, but just look at it a moment:

The habitable zone is a pure abstraction, perhaps suitable for a spinning billiard ball, but telling us very little about where life may or may not be found in the cosmos. Your question illustrates that we can truly decide habitability only in a certain place on a given planet, knowing all the features of its geology and rotation.

Not the answer you're looking for? Browse other questions tagged science-based stars solar-system habitability .

-1
A Hyperadvanced Civilization Had Created a Solar System From Scratch. Would the Specified Details Work?