Would Calcification Benefit People and If So, How?

This is a question in the series of Enchantment Benefits for Humans, the successor of Would Rubberizing Benefit People and If So, How?.

When an item kills a Chomper (you can see link one or link two for more on Chompers), that item is Calcified; it becomes harder but also tougher, capable of taking more force without shattering than another item with equivalent hardness. The durability (hardness and toughness) increase is equivalent to the hardness of enamel as compared to bone, which means a Calcified sword will be as hard compared to a regular sword as enamel is compared to bone.

That isn't to say Calcified items are more brittle; while they have enamel-like hardness, their flexibility and durability is akin to that of bone. Basically, Calcify an item and it becomes a whole lot more durable. This is great for adventurers, who of course hate it when their stuff breaks, but would it be good for creatures who kill Chompers, like humans?

Restated, my question is Would Calcification Benefit People And If So, How?

"Bonies," or skellies as they are sometimes called, have thick, shiny, and very hard skin. They are real-life ironhides, with bones like stone and muscles like steel cables. If that doesn't make sense, imagine a statue of a buff human being covered with a 2-in. thick layer of cast iron, except they can not only move but move just as quickly as a regular person, and they aren't even heavier.

A skelly is not just physically fit but incredibly strong, capable of lifting (and throwing) a small car. Their defenses are also pretty dangerous; bone can bend, and a skelly's body has that same flexibility. They are still prone to snapping and breaking, but not as much as you'd expect of someone practically made of rock. Obviously, a skelly's body acts normally aside from the above facts; for example, despite their skin's hardness, it is still flexible and does not warp, creak, or strain when they move.

EDIT: Calcification is not meant to be taken literally any more than Rubberization. Calcification makes people inflexible, yes, it makes it harder for parts of their body to bend when stressed, but it also makes them tougher to balance that. (In other words, skellie's bones have breaking points proportional to their increased hardness.) Think of stone; it may not bend, but it's not known for being easy to break or destroy, it's known for the opposite.

Besides, there are plenty of inflexible people in today's age who can't touch their toes and find stretches difficult and painful and are still relatively successful; I'm one of them! So yes, Calcified people can be shattered or deformed, but they're really not as weak as the answers seem to suggest, and they can heal.

Generally speaking, when it comes to human(oid) anatomy, calcification is an ungood thing. Downright plusungood, actually.

Obviously, the skeleton is an organ system that is composed of calcified tissue: bones are therefore supposed to contain calcium compounds, but not too much! 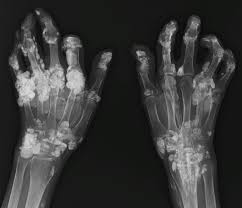 Those are crippled hands, disfigured and unable to function because of excess calcification.

Assuming the "calcification" does not change the dimensions of the bone nor changes the flexibility, this would still be bad.

Two things can happen. One is similar to titanium in your skeleton. Yes its hard, its light, its flexible, it also bends where bone breaks. These bends are hard to heal and cause problems, which is why we dont enhance our bones with titanium.

The other is that our bodies have evolved over the years to be as surviveable as possible (or at least an attempt to be as surviveable as possible). Humans are one of the few species that can survive broken bones, and our bones have evolved to match: Your bones absorb a ton of forces by breaking at their breaking point. This helps organs and tissue survive the impact more easily than if the bone was hard and didnt break.

Our bones dont have the perfect ratio for breaking when they do, but its a lot safer than a massively harder bone with the same flexibility.