What would a video game lava level be like in real life?

So this is something I've recently started to think about lately and it's honestly a case of genuine curiosity more than anything else. Many fantasy/adventure-oriented video games usually feature a level defined by flowing rivers of lava, active volcanoes and long stretches of barren, rocky land to trend through. Hell, Star Wars: Revenge of the Sith featured an entire planet themed around this exact same concept.

Since these type of environments don't actually exist in real life (well, on Earth at least) my question is, what conditions would need to be met in order for an environment like this to exist in real life and function like they do in video games? How hot would the lava need to be in order for it to be as viscous as water (which is what video game lava basically is)? Could you hop across large rocks situated on top of lava flows like makeshift platforms? Assuming you had both a gas mask and the right kind of getup, could you even set a single foot in this place without burning to a crisp, blowing up or suffocating? Could any sort of life at all adapt to living in an environment like this (this as in, the space between the lava flows and rivers, not the actual lava itself)?

Also, key note. I'm not interested in HOW this environment came to be, only the way it would function.

Lava rivers exist in real life, especially in volcanic areas where the lava is basic, thus very fluid, like Iceland, Hawaii and all over the globe where a rift is open (bonus, those are mostly underwater). Viscosity of lava is mostly dictated by its chemical composition: the more acidic it is, the more viscous it is. And viscous lava tend to explode, because of the gas it traps.

Due to the scorching heat radiated by the molten lava there is no life which can survive in the immediate proximity of a lava flow: apart from heat damage, any water would be quickly dried away.

And even humans would not fare well in those environments. Volcanologist wear protective gear to not get charred by the radiant heat, but it's far from being pleasant. Top it with the risk of suffocating. Far from being the funny stunt that you see performed by Lara.

Since these type of environments don't actually exist in real life

They do exist in real life. The word "lava" was not invented by game writers, it came from the real-life phenomenon.

what conditions would need to be met in order for an environment like this to exist in real life and function like they do in video games?

Live near a volcano or move to Hawaii. 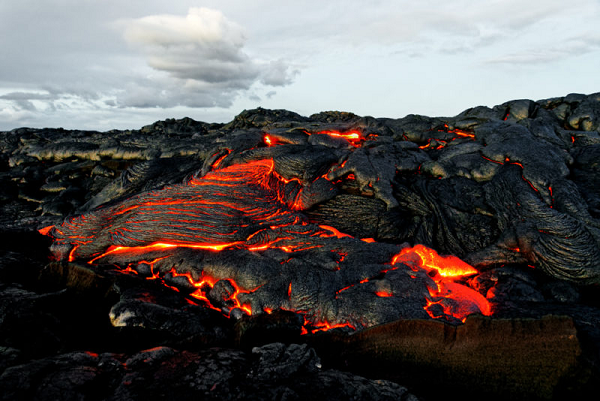 Not the answer you're looking for? Browse other questions tagged environment volcanoes lava landscaping video-games .

9
What would life around a hydrothermal vent on Europa be like?
9
Semiliquid atmosphere - Is my premise/conclusions correct; and will it get the result I want?
34
How would a city styled like Venice be built with lava instead of water?
69
Is there a real life substance like movie acid?
7
What is the range of lava/magma viscosity on exoplanets; what conditions would have the least viscous lava lakes?
3
Would an deep sea lava river be feasible?