What is a realistic maximum velocity of a coilgun round from a 100 m barrel?

I'm interested to know what is the maximum realistic muzzle velocity of a coilgun with a 100m barrel length. Round is a solid KE penetrator.

I'm asking from a viewpoint using known physics and materials, but pushing those limits to a realistic maximum even if such a design is not yet practical.

For a rough idea, you can use Luke Campbell's approximation for coilgun performance, which basically imagines the gun as a tube of energy in the form of the magnetic field, which is swept out by a projectile that turns it into kinetic energy. You can assume that any figures this gives are over-optimistic, but it isn't a bad upper-bound for coilgun performance.

There were some errors in the barrel length calculation for the earlier draft of this answer, which have since been corrected.

The first thing we care about is efficiency... our coilgun will inevitably cause the projectile to heat up as a result of induced currents, and if we heat it up to melting point the projectile will disintegrate making it much less useful as a weapon or worse: it'll explode, taking a chunk of your ship with it.

Lets say that our coilgun is 99% efficient, and of the 1% of the energy that it wastes, half of it goes into the projectile. If we have a 200g projectile with the specific heat capacity of steel (500J/KgK) and the melting point of steel (say, 1800K) we can see that the projectile's temperature will raise by 1K for every 100J of wasted energy. If we magically start it off at 0K, we can see that it can absorb no more than 180kJ. Working backwards, this gives us a maximum kinetic energy of ~35MJ and so a maximum muzzle velocity of 18km/s, regardless of anything else about our gun.

This is obviously bad for your hopes and dreams. A bigger projectile won't help you; you need one with a higher melting point, a larger heat capacity, and a more efficient coilgun to get the speeds you want.

Lets imagine your projectile now has a SHC of more like 1kJ/KgK, and a melting point of 3000K. You can now heat it up by more like 3MJ/kg instead of 900kJ/kg. We'll give your coilgun an efficiency of 99.9%, and half the wastage goes to heating up the projectile again. We can now have a maximum muzzle energy of more like 1.2GJ, which for a 200g round gives us a muzzle velocity of nearly 110km/s.

That's a bit better, but remember: this is a maximum, regardless of anything else like barrel length, or field strength, or projectile weight. You cannot get anything better unless you use magical materials, or magical ultra-efficient coilguns (and this example is already quite magical). Obviously, your story, your hands to wave, but this stuff is important to remember if you want a hard-ish scifi setting.

There are possibly other things you might be able to do, like packing your projectile in some kind of coolant that is melted and evaporated to cool the projectile as it is accelerated. This may help a bit, but does impose some parasitic mass that will limit the muzzle velocity of the projectile (and makes calculation of the final velocity into some kind of horrid differential equation which I won't be solving for you).

The strength of the magnetic field is limited by a bunch of inconvenient things. You could work out the require currents for a given size of superconductor, limited by the material's critical current, but lets instead go for 200 Tesla. That's a nice round number, and doesn't rule out superconducting projectiles, as it should be below the critical field strength of futuristic high-temperature superconductors (see here for some analysis of YBCO, one of the best practical real-world superconductors).

The magic number of interest here is the energy density that the swept volume can have... this is $\frac{1}{2\mu_o}$ (where μ0 is the permeability of free space) or about 400kJ/m3/T2, multiplied by the square of the magnetic field strength. In the case of our hypothetical 200T coilgun, that gives us a maximum energy density of 16GJ/m3.

If your projectile is 20mm across and your barrel is 100m long, the amount of energy is the swept volume will be a reasonable 0.5GJ, for a muzzle velocity of 70km/s. To get the 1.2GJ we want for our 100km/s super-coilgun, we'd need the projectile to sweep out ~0.074m3, which for a 20mm projectile works out as a barrel that's 236m long.

A 30mm projectile would let you fit your 100km/s gun into the original 100m length limit, but:

You could use a fat, low-density sabot which drives a thin dense projectile, but the sabot represents parasitic weight that eats into the kinetic-energy budget of the narrow penetrator. There's no free lunch to be had here!

Finally, you should see that I've been looking at coilguns, not railguns here.

Railguns give you much more oomph for the same length barrel, but unfortunately shooting them causes damage to the rails as a result of the super-hot plasma arc that forms behind the projectile.

This means that railguns have scaling problems... you can't shoot them too much before the rails need replacing, and the rail damage goes up with muzzle velocity so you may find a railgun that works just fine at 3km/s (at least for a little while) will be wrecked at 10km/s and explode violently at 30km/s.

Coilguns don't have wear issues, as the projectile can be levitated in the barrel and be entirely non-contact and no arcing need occur. They do still have scaling issues: you have to turn off a coil the instant the projectile is in the middle, and it is hard to simply vanish the field of a very powerful magnet! One way to do this would be by using superconducting coils and heat them to drop the superconductivity (sometimes known as a quench gun) but that'll turn the field energy into heat, and lots of it. Fire rate will therefore be limited, and ultimate velocity will also be limited by your ability to a) quench your coils fast enough and b) cool them fast enough afterwards to fire the gun again. There is, however, no theoretical limit to barrel length or muzzle velocity, so if you want >10km/s you almost certainly want a coilgun.

Based on current proposed weapons, we can estimate the rough acceleration we can achieve with a rail gun and scale that up.

That said, this would require a much bigger power source, that would sustain for a longer acceleration. This set up is not feasible with current technology, as most railgun power sources can only operate barely long enough to fire the projectile. If technology was developed to fix this it might affect the acceleration speed.

Existing ground-based inertial confinement fusion pellets implode at ~300km/s, and are accelerated over a distance of a few mm (and this is far from the lab speed record). These are laser powered, and the shock waves due to the sudden acceleration heat the pellet substantially before it hits the center. Gentle acceleration up to 100km/s over 100m doesn't have to liquidize your bullet.

The relevant principle is: use a plasma to push on your bullet. Plasma gets more electrically conductive as it heats up, and your bullet stays in the barrel so little time, the plasma won't conduct much heat to the bullet. It will just ablate a thin layer of it. The plasma is confined between the bullet and the magnetic field pushing on it. Similar principles apply for plasma railguns.

At these magnetic field strengths (100T is currently achievable on the relevant timescale), you can exert enough force to crush most solid objects.

Ultimately, the limit is going to be keeping the bullet solid as you push on it. The maximum force you can exert is the yield strength, which might be 1GPa; with this pressure over 100m, you get 100GJ/m^2 of energy transfer, and with a low-areal-density 1kg/m^2 bullet, about 400km/s.

A sabot round arrangement (or just crushing the plate into a pellet) will allow you to concentrate much of this energy in a penetrator.

Of course, you could do much better than a puny 400km/s with a laser-pushed ablator because you can maintain the acceleration till you hit the target.

I really do not understand the purpose of the 100m barrel, unless you are projecting a VERY big bullet.

Some references here about the American navy, but it is so far behind. The leader is undoubtedly the Chinese army.

Railgun technology, which uses electromagnetic force to send projectiles up to 125 miles at 7.5 times the speed of sound, is cheaper and more accurate than traditional gunpowder-based methods. "Using a massive electrical pulse rather than a chemical propellant, the railgun can launch projectiles much farther than the 13-nautical-mile range of the US Navy's standard 5-inch naval gun," the US Office of Naval Research says.

Here is a picture of the Chinese weapon, undergoing deployment shakedown trials. Notice that the barrel length is much shorter than the dreadnaughts of WW1 fame.

However, it is rumored to be a coil gun, not a rail gun. 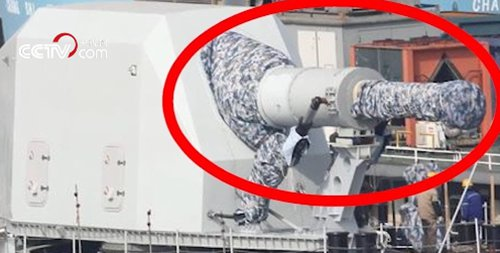 24
What are the advantages of a coilgun v.s. a railgun?
1
Hand Held Coil Gun cannon - Enough to rip a giant robot limbs into pieces
7
Reimagined Weaponry: The Illidari Warglaives
8
Could a mass-proportional physical speed limit on projectiles “nerf” guns but not ruin archery?
3
Ballistics of a 19.25mm revolver
14
What is the realistic approach for a person from modern age to build a modern weapon factory in the Bronze Age?
14
Mostly realistic weapons to assault a planet from orbit
3
Making a modern day 9mm gun-glaive?
6
How many gs could a coilgun or railgun shell withstand?