Why do demons need to wear clothes when they detest everything about us?

Humanity have been fighting the outcasts since ancient time, their ancestors whom had betrayed the gods and angels now dwells in the mortal realms feasting upon our flesh and blood turning the surface of the earth into burning hell.

It seemes god had given humanity a test to decide if we are fit to rule over the mortal world and decided never to intervene, as time progresses even the demons feel unease at the sight of our cruelty to their kinds despite their mind has deteriorated into savages bloodthirsty animal like.

I am wondering if the demonkind find us so terrifying and detestable, why do we still see them trying out human clothing? Unlike us they do not feel embarrassment and their thick hides do not suffer from sunburn or collapsed into wrinkles when being drenched... is there any good explanation for this odd behaviour?

Okay, hear me out. First up, the demons are outcasts who betrayed the gods and the angels. I'm not sure how humans are being cruel to "their kind," but if demons are so savage and evil, why wouldn't that be attractive to them? We're the most deadly species on the planet, we're quite interesting when one considers our social structures, psychology, and idiosyncrasies, and considering that we're (I assume) somehow hurting the gods/angels they betrayed and were outcasted by, which they should naturally resent and/or hate, they should absolutely love us.

Seriously, we're pretty savage at times; so are they. They're pretty carnal, and we can be just like them in that respect. We don't like the gods? Well they don't either (or shouldn't either). They're evil and destructive? Well, humanity has that side too.

Thus demons try and put on clothes so they're fashionable and more attractive to people, or that they blend in better so they can date, marry, study or even enslave people. Even if they still find us terrifying and detestable, we're all they really have to interact with aside from other demons (which I'm pretty sure are rare....can they breed? Do they breed often?) and subjugating people is a pretty good way of ending the threat they pose.

We might become their playthings, or their anti-deity soldiers, but we should still be alive and well. In fact, there will likely be some cambions (half-demons) bred to take down the gods, due to humans having useful traits that the demons don't and vice versa.

As a subtle form of mind-play on weak humans

Humans use clothing to send social signals. What comes to mind when you think of:

All of these send social signals to us, it's a form of representing status or sending messages. Many of these are incorrect generalizations or stereotypes, but we automatically process the outfit and context and use it to give information.

So Demons decide to mess with this and make us feel uncomfortable by screwing with our social norms: 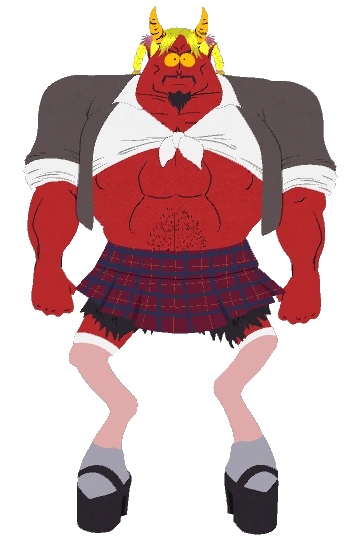 If you fall into the mistake of making a sissification stereotype and view this demon as weaker because a male body is wearing female outfits, lowering your guard to them, are you going to be more surprised when this demon breaks your neck?

Because it helps them disguise in the crowds.

A naked body will immediately attract attention, regardless of how well proportioned it is. The last thing demons want is to have shouting people all around them whenever they venture outside, because it means troubles for them. It ruins the surprise effect if they are planning an attack, and it spoils the mood of a relaxing brunch with friends.

By wearing human clothes they can manage to get some disguise and be relatively safer when they want to avoid interaction with humans.

'cause they mock on human (god inspired) habits The assumption "demons hate humans" is probably wrong. That depend on your cosmology, but from actual running cultures demons don't hate humans, as much you don't hate ants. They hate god. For a transitive property, they try to mess his creation included humans. Again: that depend on the cosmology, but there's no stated assumption demons are direct opponents of humans. Why they wear dresses? Interestingly, this can be a mockery on god. It was god intervention in the past that inspired humans to cover their bodies. So, demons show to god how silly is to wear silk worm filaments or sheep whool and the morality behind it.

Not the answer you're looking for? Browse other questions tagged humans gods clothing demons .