Would Rubberizing Benefit People and If So, How?

This is an extension of What Weapons Would Benefit From the Rubberizing Enchantment? and covers people instead of items.

Basically, when someone kills a Plop with an item, that item is Rubberized; tough, flexible, and waterproof, akin to natural rubber. A Rubberized rock will be firm but springy, like a tennis ball, and it'll bounce. A Rubberized sword will be just as sharp but will be less rigid and more flexible. If someone pours acid on a Plop, the acid will transform into a rubbery substance; if someone burns a Plop, the result will be rubbery ashes; and if one shoots a Plop, the arrow and not the bow will be Rubberized.

However, if someone squashes a Plop into oblivion with their bare hands, or eats one, they will be Rubberized. Do that once, and you'll just affect your hands or stomach (the inside, not the outside). However, those that consume twelve Plops change more dramatically, essentially becoming living ragdolls with unnatural elasticity, flexibility, and tough (and rubbery) skin.

That being said, while such 'gummified' people can breathe and walk, there are problems. Their muscles are plenty strong, but they tend to be loose, causing gummified people to walk like they've been zombified, or they're drunk, or perhaps sick.

They may be tough (bludgeoning weapons don't usually hurt them, and they tend to slip out from heavy objects before they get crushed) but they fold, fall, or fly away when struck, because they are essentially living ragdolls. Or in other words, they may be strong (5x stronger than a regular person), they may be tough, but they're too flexible to really do anything with it (I assume; can rubber be stiffened by tensing it, or by stretching it tight? In that case, Rubberized people can actually do something with all that strength!)

My question is: Would Rubberizing Benefit People and If So, How?

a. Whatever benefits ragdoll (or mannequin if that makes more sense to you)-like flexibility would have for people

b. Whatever benefits the toughness resulting from Rubberizing will give to someone

c. If there will be any benefits from the waterproofing effect of Rubberizing

As always, I greatly appreciate your input and feedback, so if you decide to VTC or downvote, please tell me why so I can improve this question and make better questions in the future. Thank you.

Whilst you haven't really characterised the "looseness", I'll assume it means hypermobile joints... stretchy ligaments, things like elbows or fingers that should lock at maximum extension but instead bend a bit too far, etc.

One way to deal with this sort of thing is to have an external framework that limits range of motion. Real world analogues of this might include orthotic braces, and maybe your ragdolls would have these to make life easier, or might find them nearly essential.

You could certainly imagine a more combat oriented kind of orthotic... a full suit of plate armour (assuming your mention of swords implies this sort of tech level!) where the weight isn't an issue due to super strength and the limits to the wearer's range of motion are a benefit, not a handicap. Blunt force trauma, of the kind that was the best way to dispatch a fully armoured warrior before the advent of decent musketry, obviously won't work as well on rubberised individuals making them potentially fearsome combatants. The significantly enhanced strength would let anyone regardless of age or gender stand up to regular troops. Depending on strength and stretchiness there might be scope for some quite alarming kinds of framework or vehicles... great big stilt-legged, long-armed things with the ability to reach down and sweep up a regular human into the sky and step away over a town wall, impossible to follow in time.

There's some scope for being a superior climber too, and being tough and strong and bouncy, a rubberised person could be launched out of a catapult into hard-to-reach places without too great a fear of falling or injury... useful for rescue, spying, burglary or siegecraft, as I'm sure you'll agree. Being able to be squidged down into a very compact space to the envy of any contortionist would help with some of those jobs as well.

They'd obviously be ideal for unarmed combat. They could make superior wrestlers, depending on the ruleset... their strength would obviously be hugely beneficial, and good luck trying to get a submission from a joint lock on one of these folk.

Not many wrestlers on the battlefield of course, but as a circus strongman (or woman), gymnast and contortionist they'd make excellent entertaininers. There's obviously more salacious uses of their talents too, as I'm sure you'll find the rest of the internet eager to inform you.

People are relatively waterproof already, though prolonged immersion risks trench foot. Not that swamps and marshes are very attractive places to live, but if rubber skin makes one impervious to mosquitos and leeches it does open up a whole new range of potential dwelling places that regular humans would avoid like the plague (and in places with malaria, this would cease to be a simile).

It does also make me think of other intelligent, muscular but decidedly non-stiff denizens of the sea: 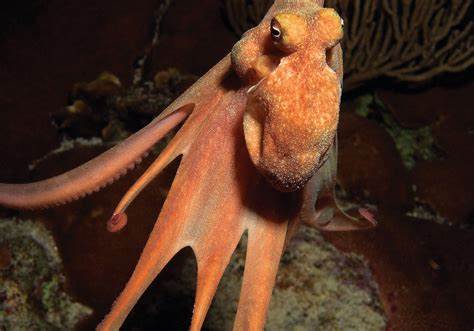 If rubberisation made rib cages and lungs more stretchy, I wonder if you could literally force air into a rubber person's lungs to allow them to hold their breath for an extended period of time, at least compared to a normal human. Additional weights can be carried to counteract bouyancy issues, and swimming around underwater might be easier than walking on land. They could swim fast, dive deep, and remain below for some time. This has all sorts of potential uses, including fishing and salvage (which could be quite lucrative) as well as more military uses.

The list, inevitably, goes on. Need to harvest fruit, or animals, or nuts, or honey from high up in trees or on cliffs? These people would be the best ones to help. Need to explore cave systems, or perhaps engage in mining? Same again. Need someone who can get punched in the head and literally bounce right back? Test pilot for your new flying machine? I could be here all night listing more things, no doubt.

Not the answer you're looking for? Browse other questions tagged magic humans or ask your own question.

8
What Weapons Would Benefit From the Rubberizing Enchantment?
5
Determining Predator/Prey Relationship for Plop and Chompers
2
Defending Medieval Villages From Gluttons and Savages
5
Plopup Masquerade: Will It Be Effective?
2
Creating a Predator For Plops
1
Would Calcification Benefit People and If So, How?
0
Will Plops Go Aquatic?