In my world, I have these things called 'voids', for lack of a better name. These voids are absolute nothingness.

What I'm having trouble with is what they'd look like from the outside. No light = black, no color = white. Light is needed for color, so black should trump white, right? Whould it even look like anything, or would it be invisible?

The brain of the viewer will fill the void.

Nothing. Bleh. It is hard to make that interesting to the reader. But what if in the context of absolutely nothing, the brain stepped in to fill the void?

In your world when you look into the void, the void looks back. And you can see it looking back. In the absence of real inputs, the brain invents seen things. People know what they see is not real (it is not real it is not real) but they definitely see things down in there. Looking into the void might be a source of inspiration or meditation. Or it might be a thing to be avoided at all costs.

Now, let's say that your volume of absolute nothingness instead instantaneously erases the existence of light, matter, and anything else that enters it. Then it would be the most perfect black possible, since no light can be emitted from such a region or pass through such a region and there is nothing within it to reflect light. If you want to see what this might look like, look up pictures of https://en.wikipedia.org/wiki/Vantablack ; the visual effect is very startling. (As an aside, such a destructive void would also be rather problematic, since air would constantly be rushing into it and being deleted, not unlike a large vacuum cleaner. This would eventually consume the entire atmosphere of the planet, rendering it lifeless.)

If you want a more fantastical take on it, you might consider cribbing Larry Niven's description of hyperspace, as best I recall it: The human mind utterly couldn't comprehend it so a person looking out a window in a ship in hyperspace would perceive everything around the window but not the window itself; it was as if where one side of the window frame ended, the opposite side immediately began. One of the characters places himself in a situation where his entire field of vision is hyperspace and his mind simply locks up until another character jolts him out of it.

If there was anything around the void, then it would be sending radiation of some sort through the void, and then the void would not be absolutely nothing. It would have something - the radiation going through it.

So either your void is contained in a universe that allows nothing in or out, or it can not be a void. That is, the void would have to be surrounded with some completely impervious 'membrane' that makes it, well, its own self-contained universe, with its own infinity in which there is, well, nothing, and which is surrounded by nothing, and that nothing goes on for infinity. As soon as you can 'see' anything, anywhere, in that void, even if it is on the 'outside', it is no longer a void.

So in that sense, you are perfectly entitled to have trouble with what this void would look like from the outside. There could be no 'outside' to a void since that 'outside' would result in something inside the void.

In that sense, since the void would have to be completely contained in its own universe, surrounded by a membrane which in fact does not constitute anything inside the void (you could not see the membrane from inside, there is nothing to see), you can make that membrane anything you want from the outside. You would not be looking into the void, you would be looking at the membrane, the boundary to the void. Make the membrane anything you want from he outside - invisible, opaque, red, a glowing orb, white, black, polka dots, camouflage, absolutely anything you want. It is not until you go through the membrane, or at least be part of it (sort of like putting your face right up to a bubble without actually bursting it - you see the outer surface of the bubble right up until you are part of the bubble) that you are in the void, and then you would see - nothing. Not even the way out. But then it would not be a void any more if you were in it.

But if you are interested in the human perception of nothingness, then research the ganzfeld.

‘Ganzfeld’ is a German word for a featureless field. The Ganzfeld effect is a phenomenon where a person of normal sight is unable to see anything after staring at any featureless, monochrome field for even a few seconds. This is a normal response from the (human) brain when it is starved of any stimuli.

Absolute nothingness would be close to the conditions inside a sensory deprivation tank and should produce no sensory stimuli at all. Perhaps, some 'magic sense' can still be stimulated if necessary. Most likely, those voids would be invisible. However, you can opt for something else to make things easier if voids have to be detectable.

I think it could be useful for your project to take a look at various concepts of folded spaces and personal dimensions and their visual descriptions. These are especially common in Eastern fantasy (storage rings, dimensional rifts, etc.).

You want something that is LESS than nothing.

The very essence of non-existence, not the mere absence of existence.

NO, I'm not talking about antimatter, which is merely another equally valid mode of matter that just has a politcal disagreement with normal matter.

The great sage Terry Pratchett gives us a few glimmers of this concept in his Holey Texts, yclept "Diskworld".
In these Texts he mentions the concept of approaching an absolute, and breaking through it to achieve the opposite thereof.
For example: Drinking enough Klatchan Coffee not only makes a drunk person sober, but over-imbibing of it takes the drinker to a state opposite of drunkenness, into "Knurd".
This is a prime example of what you are looking for. Something that is not merely the absence of a state, but the diametrical opposite. OP now just need to extrapolate this concept into light,darkness, and the concepts of visibility.

If it's truly nothing it won't be visible in any sense of the word: you won't see there's a space or anything missing, any gap or absence of continuity. To be nothing it must have no dimension we can perceive.

Imagine you have a park bench that sits three. Abe is sitting in the left seat, Barb in the right. In the middle: a nothing. To the outside observer Abe and Barb would appear to be sitting immediately next to each other; the only hint a void is between them would be an odd compression of the background between them.

This doesn't mean voids can't be interacted with, and Barb or Abe may try to reach over to touch the other. They'd think it odd they can't seem to reach far enough, but visual compression strikes again. Their hand and arm would appear (from their perspective) to be fully extended and still fall short, though their neighbour appears mere inches away.

Provided the void simply eats up everything that enters, it will also eat up light. Hence if you look directly at the void, no light can enter your eyes from that direction, either by reflecting or passing through the void. So you see a black opaque area.

Depending on how the void eats stuff up, you will see stuff happening along the edge of the blackness. For example if the void eats up air that enters the edge, then more air will immediately rush in to fill the gap left behind and there will be a shimmering effect. On a smaller scale if the edge eats up part of an atom then the rest might shoot off and release energy. So perhaps a corona of light and radiation similar to a black hole. 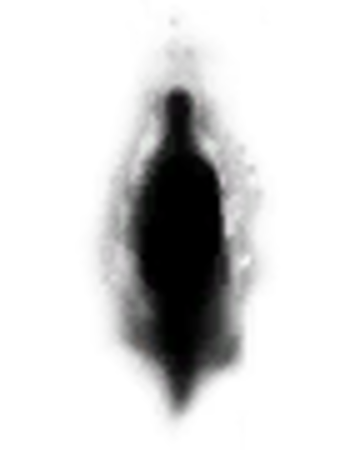 there are two voids (and a lot of shades in between), the true absolute, which has to block everything from going there, or a false one, which is all around us, it lets things through, like particles and other things, but is nothing on its own, and there are also are many shades in between, a perfect vacuum, out of any gravitational field etc. with a perfect, wave proof material, would be a very close thing, but energy and some other forces are still there

Not the answer you're looking for? Browse other questions tagged vision colors .

6
How would eyes, pupils and camouflage evolve if the sun was stationary near the horizon?
13
What would be different if a person has broader visual spectrum than normal
12
How do vampires react to passive UV light sources?
9
How would eyes that evolved in air differ from our own?
8
What would a beach look like if prolonged exposure to humans made the sand change color?
7
How is infra-vision any good?
43
How to get cool night-vision without lame drawbacks?