How would a space probe determine its distance from a black hole while orbiting around it?

Let's say that a space probe is sent to swing once around a black hole. Now, as long as our knowledge of physics goes, if the spaceship stays outside the event horizon it can, at least in principle, get away from the black hole when it wants to.

Note: I am neglecting the effect of tidal forces on the integrity of any object getting so close to a black hole

Well, don't be doing that! Those forces can be used to answer your question.

Given a couple of bars of known length and mass, and a black hole of known mass, you could measure the relative differences in length of a bar placed parallel to the local gravity vector and one placed perpendicular to it using eg. interferometry. The vertical bar will be stretched by tidal forces the closer you get, and the amount of stretch will be predictable and related to your distance from the hole.

As an alternative that uses boring old orbital mechanics instead of exciting space-mangling super-intense gravity fields, you could measure the period of your orbit by observing background stars, which you can throw into the usual equations to work out the orbital radius. This works when you are far enough away from the hole to avoid frame dragging effects, but as you get closer, more clever mathematics will be required.

Determine the location of the photon sphere using laser beams.

The photon sphere is located farther from the center of a black hole than the event horizon. Within a photon sphere, it is possible to imagine a photon that's emitted from the back of one's head, orbiting the black hole, only then to be intercepted by the person's eyes, allowing one to see the back of the head. 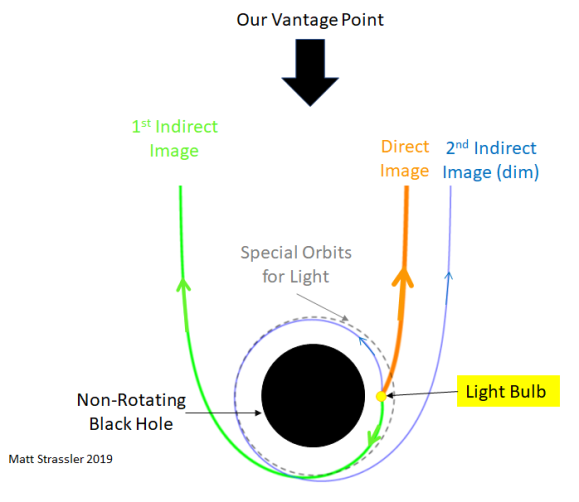 You here use the photon sphere as a proxy for the event horizon. You will swing your (shark-mounted) laser slowly from left to right such that it will trace out a diameter of the circular region of interest. There will be a point where you can detect your photons coming back to (your shark) as they loop around the black hole. That distance from the center is just outside the photon sphere which is just outside the event horizon. As your laser continues to the right its photons will be lost into the black hole. As it emerges on the left your will detect the photons coming around from the right. You have now marked the lateral edges of the photon sphere here used as a proxy for the black hole. Should you suspect the region is other than circular you can draw a few more diameters with your laser.

You do not need to get close to do this. You can do this from some distance, which I recommend at least the first few times.

The probe is in communication with a relay station live streaming the event back to NASA and eager nerds like me. The communication is bidirectional, and the probe is constantly acknowledging packets received. (Think TCP protocol but tweaked for space.)

The constant stream back of acknowledgements keeps the communication channel constantly active, allowing the probe to measure the frequency shift of the data link.

Because it knows that the relay is far enough away from the black hole (and traveling slowly enough) that time dilation isn't an issue to N significant digits, it can calculate the exact time dilation from the frequency shift of the known communication frequency.

Eg the 5Ghz radio signal is arriving at 25.453Ghz - so that relay stations clocks are running 5.0906 times faster than mine. That's means my clocks are running at 19.644% of real time. You now know your time dilation factor to as accurately as your communication unit can measure the changing frequency.

Assuming you're not orbiting at relativistic speeds, from this, you can calculate your approximate distance from the black hole.

If you are orbiting at relativistic speeds, ie, you're getting in that close, you can measure the change in time dilation (via frequency shift) at regular intervals (in probe time). I'm not smart enough to be 100% certain this will work without coding a simulation, but my gut instinct is that there will only be one valid orbital ellipse possible for a given sequence of time dilation measurements.

That sequence of changing times should give only one ellipse and your phase on that ellipse. From that, you can do your orbital maneuvers.

You'd need to know in advance: the mass of the singularity - from this determine its Schwartzschild metric and the curvature of the geodesic, have a star-map and reference points for the emission spectra of those stars.

You can determine how far into the gravity-well you are by looking at how much the spectral emission lines of hydrogen in the surrounding stars have blue-shifted.

By applying the Lorentz factor - a solution to Einstein's field equations, you can then deduce how far from the event-horizon you are - and it wouldn't be necessary to be orbiting the black hole, you can take a straight approach.

If you’re close enough to the black hole to be in any danger, you’ll be orbiting it very fast. Just use the varying parallax to other nearby objects to determine the shape of your orbit, and the black hole will be at one focus of the ellipse.

Just look!. The appearance of a black hole in space is rather distinctive, and basic measurements with a radiation-resistant video camera should give a good impression.

Of course, measuring the deflection of each star by general relativity gives a better impression. The makers of the video linked above could do that, and so can your space probe.

Not the answer you're looking for? Browse other questions tagged science-based orbital-mechanics black-holes .