So imagine a country so developed they have a space station in orbit around their home planet (nothing impossible here). That country decides to have a couple of soldiers (elite air force members) stationed there for security reasons. These soldiers are equipped with what amounts to armored spacesuits for protection. Now these soldiers are to have a firearm that they can even reliably use outside of the station in the vacuum of space.

Would a normal firearm suffice or would you need a specific type? (gas operated, recoil, blowback etc.)

Any of the firearm types we use now (bolt action, revolver, gas operated, recoil operated, or blowback) would function as expected in vacuum, with two significant caveats. According to "Gun Jesus" (Forgotten Weapons on YouTube), the Soviets sent handguns up with certain space missions, as well as mounting weapons on one of their early space stations. The guns they used appear (from the photos, I haven't seen the video) to be single-shot weapons, like a Soviet version of a Thompson-Center Contender, though from comments I understand they're semi-autos, descended or derived from the Makarov.

First, ammunition will need some level of special production to protect against air trapped inside a metallic cartridge from popping the bullet (or primer, but with less area it's less of a problem) out of the casing, resulting in various kinds of failures.

Second, the weapon itself (specifically the barrel, receiver or frame, and revolver cylinder) will need to be proofed for service in space (among other things, lubricants are likely to be an issue due to evaporation, lack of lubricants more so due to cold welding, and a weapon left in shadow for a prolonged period may reach cryogenic temperatures, which can weaken steel).

As pointed out in comments, if you fire a weapon enough times in rapid succession, the barrel and chamber will get hot -- and in vacuum, you don't have air to carry the heat away, you can only dump excess heat by radiation. I consider this a relatively minor problem, however; the only firearms that routinely have barrel heat issues that affect their regular operation are heavy machine guns (like a Browning M2 .50 caliber), firing large rounds at a high rate for a prolonged time. It's possible to heat up an assault rifle enough to melt or burn the wood or plastic parts, but this typically requires firing multiple full magazines (20 to 30 rounds each) in rapid succession. I wouldn't expect this to be a significantly larger problem in vacuum than at Earth's surface.

Assuming the weapon has been redesigned as necessary to work correctly with lubricant coatings instead of oils and greases, protect against cold welding, and stand up to high pressures at temperatures below 100 Kelvin, and the ammunition treated (likely by crimping both bullet and primer, as is already done for weatherproofing) to stay together in vacuum, then the only other issue is recoil.

This doesn't have to do with the weapon as such -- but a gun is essentially a pulsed rocket, with part of the exhaust being a solid projectile. Each time it's fired, it will push the user backward, and if the line of thrust doesn't go through the shooter's center of mass, it will also cause a spin or tumble (possibly violent enough to be difficult to stabilize with suit jets or similar). The only kind of weapon within our current technology that wouldn't have this problem, however, is a rocket launcher or recoilless -- which means your space troopers might finally provide a market and suitable need for the Gyrojet "rocket pistol" (and its carbine version).

Not for Repeated Use

This has been investigated before! In addition to removing oxygen from bullets/cartridges, figuring out heat issues, reaction forces (just brace against something before you shoot), you still have the problem of getting space-grade lubricants on the moving parts.

You need special greases that will not evaporate in vacuum but also withstand the forces/heat generated by a bullet. Otherwise, a normal gun fires once or twice, but not in a repeatable or reliable manner. People generally use these greases for things like vacuum systems- which are usually room temperature or lower. I'm not saying such a lubricant doesn't exist, but it is not common!

Each piece of ammunition is actually a small rocket that a solder would aim at the intended target. It was meant to be able to shoot in space. It mostly solves the head-dissipation issue by (mostly) keeping the head on the "bullet" and exhaust gases.

Missiles rule the day. The space station might be a sitting duck that could be hit by a bullet from ten thousand miles away, if your aim and your orbital mechanics are good enough. But whatever comes to attack the space station is almost certainly able to maneuver. So a weapon that can't steer to match that vessel's evasive action ... might as well have been left on Earth to save fuel. That is, unless the soldiers on the station have some matters of honor they mean to settle among themselves in archaic fashion.

As all the usual answers have been done already, I'm going to suggest a couple of slightly different things. 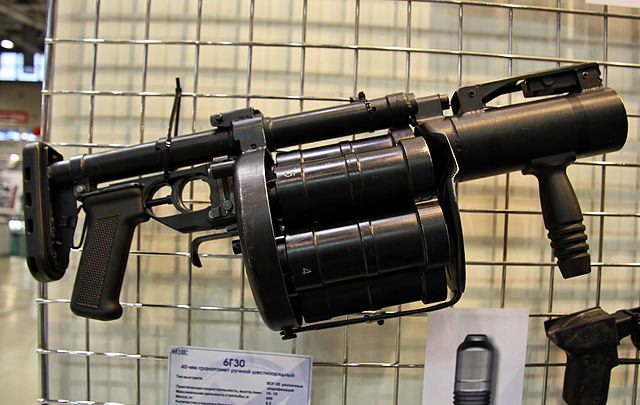 Here's a grenade launcher with a rotary magazine. It has a number of potentially interesting features. It can take a wide variety of ammunition types, allowing the use of non-lethal riot-control type things inside space stations where shooting a big gun risks poking a hole in the world and letting all the air out. It can deploy smoke. Imagine what it would be like to be in combat in a spacesuit, and to have someone shoot a can of paint at you. You ain't gonna be wiping that off your visor with your big clumsy mitts. You're blind, utterly disoriented, and in short order, out of the fight.

More interestingly, though, it could do things like fire a proximity-triggered fragmentation round of the sort more commonly associated with anti-aircraft cannon.

Aiming and shooting weapons whilst wearing a spacesuit is going to be really hard. Anything that makes life easier for the shooter will tip the balance of the fight in their favour. Not quite shooting straight? Never mind, just get close enough and you'll hole your enemy and they will not be fighting much more today.

There are even more things potentially available here, including simple guided projectiles or small rockets. The sky has ceased to be the limit!

For related reasons, I'd also consider shotguns. Similar benefits, but the smaller rounds preclude the more exotic or destructive options that the big chunky launcher might offer.

There's a kind of shotgun ammunition you may or may not be familiar with, flechettes: 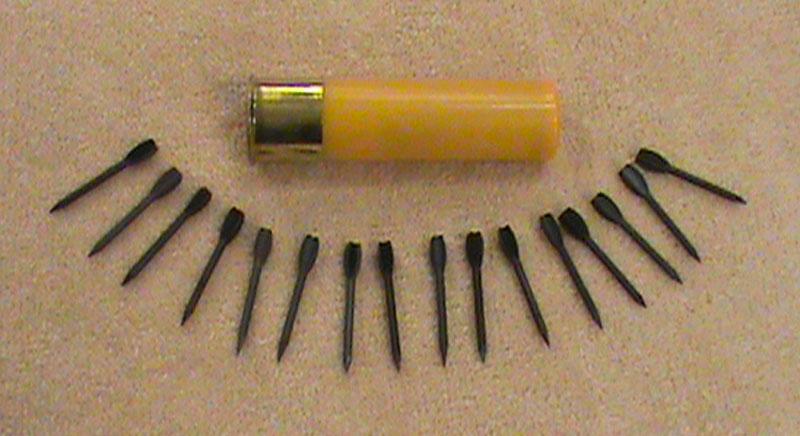 These cartridges fire a bunch of aerodynamically stabilised darts, and are therefore minimally useful in a vacuum, but inside a space station they offer a way to penetrate spacesuits at a distance even without needing the sort of careful aiming that is difficult when wearing a spacesuit yourself.

Against unarmoured opponents, regular shot offers a similar benefit without the worry of letting all the air out of the habitat.

Not the answer you're looking for? Browse other questions tagged science-based firearms or ask your own question.

24
Sci-Fi weapon that can kill people through armor, but doesn't damage starship hulls?
23
What is a good reason for every spaceship to carry a weapon on board?

26
Could life form in outer space?
4
How to retrieve cultural artifacts from a world under siege?
19
Minimizing the Side Effects of Breathable Outer-Space
10
Can a firearm stay functional in a hidden cache in a jungle in Vietnam or in Siberia for 700 years?
8
A world without fire - what will the military use as their main soldier level weapon?
20
Which modern firearm should a time traveler bring to be easily reproducible for a historic civilization?
6
Planting Trees in Outer Space
7
How could a charge-type breath weapon work?
3
Malicious Infection Transmitted Across Outer Space