Converting deserts into more hospitable places by inducing rain through the ocean?

I want to know if this is scientifically possible in the real world.

When you take vast expanses of deserts (the sandy hot ones, not the icy ones) like the Sahara, life in general is restricted to near whatever small rivers or oasis/lakes there are or close to the oceans. But these places can become vastly different with just a bit of steady rain. Take India or mainland southeast Asia/ southern China for example which is on the same level as the Sahara from top to bottom on the map but is much greener and can sustain high population and produce lots of food and even rainforests similar to the amazon thanks to monsoons and tropical rainstorms.

The only way to make it rain is to get cloud systems to make their way into the Sahara, but as is evident this doesn't happen. So maybe a way to fix this is to bring massive quantites of water inland where they can evaporate away and then rain down somewhere else in the Sahara (which is HUGE so the rain clouds won't make it far enough to escape the desert).

This could be achieved by making massive, deep canals (dimensions can vary) that run through much of the interior of the Sahara (like the veins of a leaf) bringing Atlantic and Mediterranean water inland which evaporates in vast quantities and bringing more water in. Dams could be built to control flow and generate power. Endoheric basins could be expanded on or completely built from scratch to create inland seas like the Aral or Caspian. Rivers like the Congo which already have a high elevation and is second only to the amazon in the water it produces could be diverted easily from higher to lower elevations in the Sahara. Dams again could generate power for new settlements along the new river banks.

The salt which collects at the bottom could be a problem and block the canals but they could be mined away or made into building materials and coated to prevent water from dissolving them and this could be used to make at least a few small scale houses. Other industrial uses escape me but must exist. The threat of rising sea levels is non existent as these canals could be made deeper and narrower to prevent flooding. if built on a large enough scale it may even lower the sea levels worldwide. The lake chad basin alone is bigger than a quarter of the US and is mostly desert. Mining could make it deeper. The Massive amounts of materials generated could be used to reclaim new land from the ocean or build flood barriers like the Netherlands is doing.

Could this turn the Sahara green? Or at least make it more inhabitable?

You have rediscovered the Sahara Sea idea. 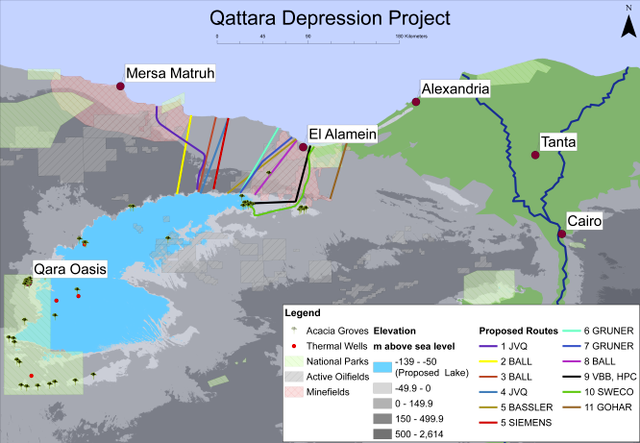 Its a good 150 years old, so you can sea that people have been thinking about this sort of idea for quite some time now. Proponents of the plan think it has all the good points that you mentioned. What doesn't seem so obvious is any consideration of the bad effects of having a non-draining hypersaline lake. They also didn't worry about the opinions of the locals, because colonial types with grandiose ideas seldom worry about that sort of thing. It is worth remembering that the people who live there will have strong opinions about such a project, have their own economical and political woes, and a significant amount of suspicion for anything coming from former colonial powers.

Maybe have a read of this XKCD What If? about flooding death valley, which talks about the Salton Sea, not very enthusiatically. Of course, the Salton sea is never refilled in the way that a new body of water connected to the ocean would be, but some of the underlying issues will be shared.

Dealing with the salinity is unlikely to be as easy as mining a bit of salt and building some pyramids with it, alas, especially when you consider the sheer scale of the enterprise.

It may be that the local climatic changes caused by this new body of water might be beneficial enough to warrant the risks of the creation of the sea, and the huge amount of destruction it would cause. I wouldn't want to bet on it, though.

Although moisture is one of the important building blocks of life, you can't just throw water on it repeatedly and hope for the best. To make something green, you also need the following:

A desert often misses one or both of these things. Good examples are temperate and arid deserts. Few things grow, as there isn't enough to retain the water that has fallen. In addition, without plants and trees the nutrient rich soil is washed awayby rain, the very thing that should help. There is erosion.

More rain in the sahara specifically will not work directly. Left alone it might grow fully green with enough rain, but it would take a long time. And I say 'might', as I don't know how much soil is washed away and how easily the sand holds the water. You can still increase the speed and range of this process though. In China they've experimented with planting diamond shapes throughout the desert. Thise are just plants on the edges of the diamonds, while the inside is untouched. The plants start holding both the soil, the water and cool down their surroundings thanks to vaporising water. This will increase the chances of rain and vegetation to grow in the diamond shapes. In a year it looks green. In three years it looks like a wild young patch of forest. To my knowledge this isn't location specific, although I do fully expect you need to have a basic amount of rainfall.

Your idea to evaporate more water and in closer proximity will help with more rainfall and cooling, although the saline properties can be difficult close to the water source as well as building up salt levels like the red sea, potentially stoppimg water flow. It has many other possible problems as Starfish Prime is stating. But in essence, you can increase the rainfall. Still, more vegetation would be a great help.

The whole idea is not particularly practical. However some progress could be made. I suggest that salt water canals into the interior of the Sahara would be a very bad idea. It would cost a fortune and they would contaminate the existing deep water aquifers making them unusable. To make matters worse the salt would soon start to crystallize on the surface and sides of the canals and some would be blown across the land. Operations to remove salt would undoubtedly also spill salt water onto the land increasing the problem further.

It would be far better to pump fresh water into specific areas of the desert than salt water. Also it would be beneficial to ensure that what little rain does fall is utilized to the maximum extent possible, either captured and stored for use in cisterns underground or directed through a series of overflow channels into areas where plants and trees are being grown.

The cost would be huge you might want to try getting some top end multi billionaire like Elon Musk to redirect their energies into greening the desert (fat chance). But assuming sufficient funds were available it would be possible to build a lot of water purification plant on the coast and pipe the water inland. With the high temperatures and large scale of operations some sort of massive solar plant could be built. I doubt it would be possible to green more than a small fraction of the Sahara in this way but it depends on how much time and money is involved.

Note the practical problems would also include a myriad of political issues. Once a few hundred square miles or more of greenery had been established fighting would likely start over ownership and water rights (regardless of who agreed what initially).

There's a 21st century solution to this

So as pointed out by Both Willik and Starfish Prime, we've been planning to build a channel into the saharah for nearly 2 centuries. The issues are:

The Sahara desert is 9.2 trillian square meters, to water it with 250mm of yearly rainfall (A common definition of a desert) you'll need 2.3 * 10^15 liters of water per year. That water needs to be salt free and pumped into the Sahara.

Desalination is pretty expensive; You're looking at about 3.5KWH per KL, so 8.05 * 10^15 Watts of power per year. 8 PetaWattHours of power per year, or 920 GW of average power throughput. This is 92 times larger than the worlds largest solar/battery power plant, but not entirely impossible. Looking at about \$1.2 trillion for power, which would include 2.7TWH of battery storage allowing it to run overnight. You'd probably want to spent that much again on wind turbines too to avoid draining the batteries every night, which is bad for their longevity.

The total of the project is looking at about \$45 trillion, lets round it up to \$50 to include piping, pumps, buying land from people who are going to be flooded, and everything else I'm forgetting.

Earths GDP is about 80 trillion, so funding this would be hard, but not impossible. I'd suggest a global 30% wealth tax on anyone with over 3 million USD in wealth, and a 99% wealth tax on anyone with over 1 billion USD in wealth. The tax is so small relative to their fortunes they won't even notice - they'll all still be multi-millionaires at the end.

Not the answer you're looking for? Browse other questions tagged science-based geography engineering .

13
The shortest possible distance between a boreal area and a hot desert?
6
How to drain out the entire Mediterranean?
37
How to stop a massive canal system from silting up?
5
Sea pumps to create rain using windmills to control weather?
6
Could a nomadic hunting society survive in a country without wind?
20
Is my river map even remotely realistic?
3
Can my preindustrial civilization control an artificial water flow on the scale of the Mississippi?
5
Living on a Windy Rainless Hemisphere
2
Is This Realistic Physical Geography for my World?