How do spaceships compensate for the Doppler shift in their communication frequency?

Assume all radio communication bandwidth used in interstellar communication is standardized to a certain fixed range and all must be frequency modulated but know that no agency is keeping track anymore.

So depending on the specification of the propulsion drive, some spaceships can achieve close to 0.01c, eat dirt ion drives! Anyway the interstellar traffic is a mess and they have to exchange greetings and crucial information to ensure they are constantly updated with current events and policies.

Now comes the technical part, as the spaceship moves the com frequency it's transmitting is going to be Doppler shifted with respect to either ground control or another spaceships that isn't tailgating.

I'm wondering is there an economical solution to ensure that every encrypted massages on air is always intelligible even if one is moving at 0.01c relative to the other?

I suppose not many spaceships can afford powerful antenna and transmitter to capture radio signals that are drastically Doppler shifted, also movie magic is unacceptable!

even if one is moving at 0.01c relative to the other?

For a modern comparison: look at wifi communication channels and you'll see that they're between 20 and 160MHz inside a band that is hundreds of MHz to GHz wide. This should tell you that a small shift of ~50MHz won't pull a signal from the middle of the band outside of the band. I don't know about the disposition of signals inside the X-band which is currently used for surface-to-space communication, but you can see the sub-bands are definitely wide enough. Super-long range future space communication systems are likely to use even higher frequency communication devices... probably lasers, which will definitely have enough bandwidth to allow for relativistic channel shifting to still fall within the band.

This is important, because the transceiver equipment must already be able to handle signals from across the whole of the band. Therefore, any signal from the middle of a band will still be in band after that relativistic shifting and the equipment will be able to detect it and decode it exactly as normal.

Some additional software work will be needed to handle the fact that channels will no longer fall exactly where you might expect, but that's not a complex problem.

I suppose not many spaceships can afford powerful antenna and transmitter

Compared to the cost of a spaceship capable of travelling at even a single percent of lightspeed, a hugely complex, expansive and state of the art high power ultra wide band communications array seems trivially cheap, and for the speeds you're talking about off-the-shelf hardware can probably be used with tweaked firmware.

This isn't a problem.

Don't think in single frequencies. Use something a bit more modern for this communication protocol.

I understand how this seems like a big issue. If I transmit my voice in analog over an AM radio signal at, lets say 121.5Mhz (Only analog communication frequency I know off the top of my head) while travelling at 0.01c, the signal will arrive at a stationary observer between 122.7Mhz and 120.2Mhz. Thats 2.5Mhz of variation. At 50Khz channel increments, that's 50 channels. Which channel do I listen to?

The easiest solution is to "monitor them all" - every receiver listens to all 50 frequencies simultaneously and the speaker just plays the strongest signal, this is totally plausible even with older tech.

But this isn't the 20th century anymore!

Picking a single frequency for radio communication was dated in the 1950s, and the high data bandwidth requirements of a society spread out in space necessitate something much more efficient. Let's start with the AM transmission.

Think about that FM radio you used to use before spotify - the frequency is modulated, the receiver can handle a range of frequencies in its normal operation.

Working with "121.5Mhz" because I already mentioned it - If your receivers are monitoring 110Mhz to 130Mhz, and no one will go faster than 0.01c relative to anyone else, and your transmitters are 10 times more powerful than the background noise, you'll be able to transmit at up to 17.5Mbit/s, not including compression and error-recovery. (This comes from the Shannon-Hartley Channel Capacity Theorem).

Your transmitter will transmit on all channels between 111.25Mhz and 128.75Mhz concurrently, and your receiver will listen to the 110Mhz to 130Mhz span, allowing 1.25Mhz of doppler shift in either direction due to the velocity. Where there no doppler shift anticipated, you'd transmit at the full spectrum 110Mhz - 130Mhz, giving 20Mbits of capacity.

Put it all together into a protocol:

I'd suggest using the Ka band, it's mostly "reserved for future use", and this sounds like a future use. It can't transmit through rain or clouds but space-to-space transmission should be fine.

Your listening to 23 to 27Ghz. Your transmitting on 23.3Ghz to 26.7Ghz. The doppler shift will move the signal between transmission and reception but it will still be within bounds of the receiver after shifted by the expected 300mhz shift of such a signal.

You'll get a raw bandwidth of up to 3.4Gbit with this protocol. Assuming 20% overhead for turbo codes / LDPCC / parity bits / etc (as asking for a retransmit due to corruption is a pain if theres hour long time delays) and some landmarks to allow the frequency shift to be detected accurately, you're looking at 2.7Gbits of real throughput - ~340 megabytes per second, before compression.

Realistically you'd divide the frequency up between multiple concurrent connections into "bands", ("time slices" may be harder to manage when messages take so long to travel) - so this rate may drop in peak times when under heavy use.

That's a peak of about an hour of HD video arriving every second. Good for news updates. And syncing your local netflix proxy.

Communication between ships would be in packed data bursts. The same transmission can be recieved concurrently by multiple ships with different relativistic speeds.

You mentioned cost of the system as a concern. The processing for this could be done with what's in your smartphone now, assuming mass production and tech advances between now and then a com module should be cheap enough that you could keep a spare storage.

You can use more or less the same approach used by astronomers to compensate for atmospheric distortion, but with Doppler shift in this case.

What the astronomers do: 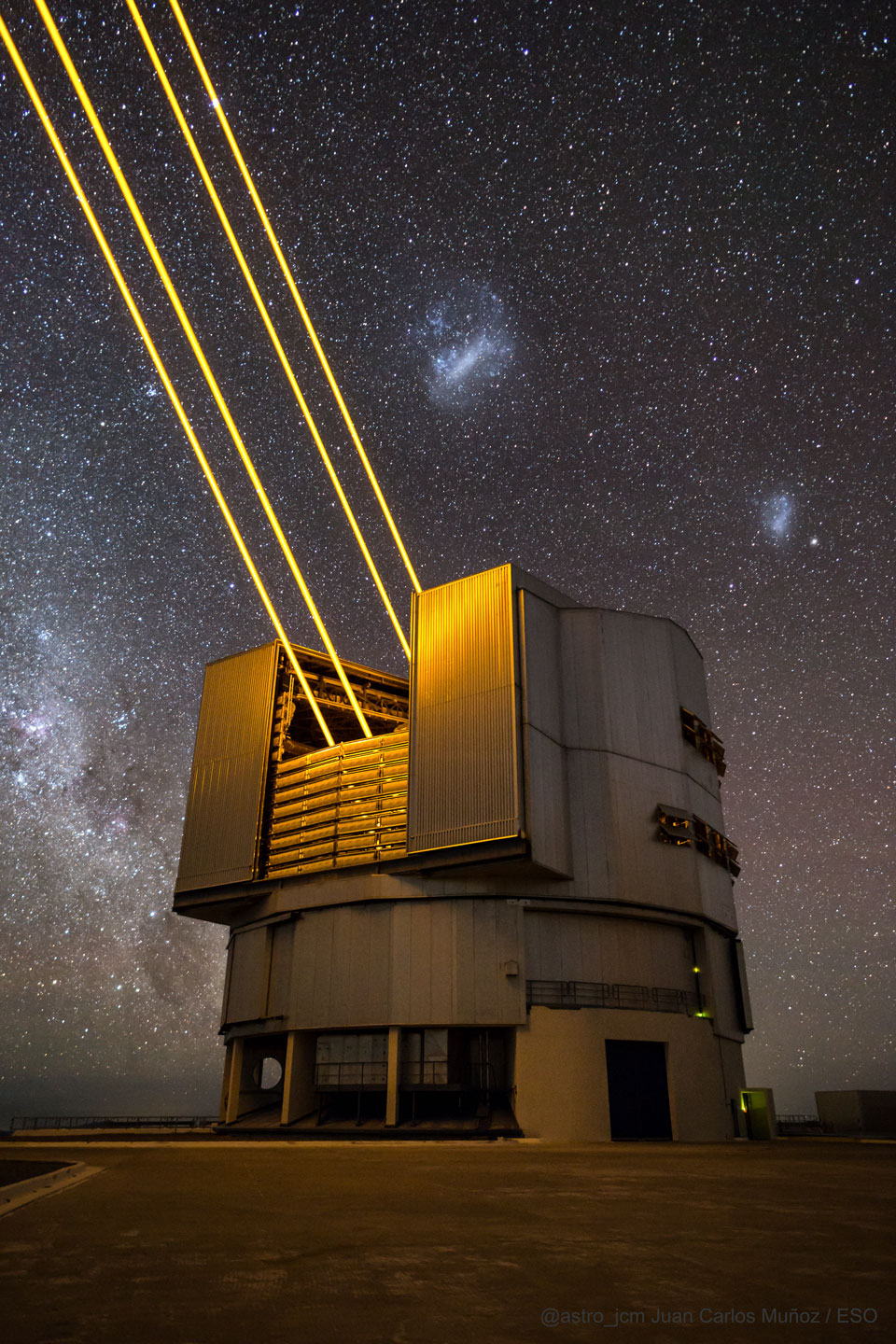 Why do stars twinkle? Our atmosphere is to blame as pockets of slightly off-temperature air, in constant motion, distort the light paths from distant astronomical objects. Atmospheric turbulence is a problem for astronomers because it blurs the images of the sources they want to study. The telescope featured in this image, located at ESO’s Paranal Observatory, is equipped with four lasers to combat this turbulence. The lasers are tuned to a color that excites atoms floating high in Earth's atmosphere -- sodium left by passing meteors. These glowing sodium spots act as artificial stars whose twinkling is immediately recorded and passed to a flexible mirror that deforms hundreds of times per second, counteracting atmospheric turbulence and resulting in crisper images. The de-twinkling of stars is a developing field of technology and allows, in some cases, Hubble-class images to be taken from the ground. This technique has also led to spin-off applications in human vision science, where it is used to obtain very sharp images of the retina.

In your case they can use a reference signal to estimate the Doppler shift, then modify your signal so that it has the right frequency when it reaches the intended target.

That is a core technology used for communications that deals with signal frequency drift. What ever protocol is used it should contain one dominate carrier frequency that the PLL can lock on. The fine details/ bulk of the information is transmitted as a function of the carrier frequency. Thus the receiver once locked on the carrier can use the inverse function to decode the information.

Not the answer you're looking for? Browse other questions tagged technology spaceships communication radio .

1
How realistic is the sun screen communication tactic in the Dark Forest, Three Body Problem?
8
How to alert Houston of the coming barbarian invaders in time, without instant communication?
8
In a decadent galactic empire with instantaneous communication, how would the most remote planet gain their independence?
5
How to build a wormhole for FTL communication? [more Engineering than Physics question]