What would be the best possible biogenic electric insulator?

Large, intelligent fliers would spell the end of HALO (high altitude – low opening for parachute jumps, often called HALO), jumps and the beginning of dragon-riding Navy SEALs. Obviously, only a klutz would pass up the opportunity to have something that cool, however, there is a slight problem, called early-warning systems.

Now, polar bears are already handling infrared cameras well, though it's somewhat uncertain if it could work in the air since they're reflecting their environment like a mirror.

For RADAR, we have two options:

Electrical insulators should be the most useful for us, but which biogenic material would have the highest (ohmic?) resistance?

Here's an image generated by a millimetre wave radar imaging system pointed at a pair of animals wearing some biogenic insulating materials.

Note that it does them little good.

Here's a paper about using millimeter wave radar to track sheep, who are well known to wear thick biogenic insulating materials at various times of the year. The paper references other papers which also use mm-waves to track animals.

I suggest that attempting to electrically insulate your would-be stealth organisms is not going to help you as much as you think.

For radar, you do not need (or want) insulating material - what matters is the reflectivity or opacity at radar frequencies, not the dielectric properties. The best way is to reflect the beam somewhere in the empty space, without scattering it. That means you need to cover yourself with flat reflective (i.e. metal) surface(s). 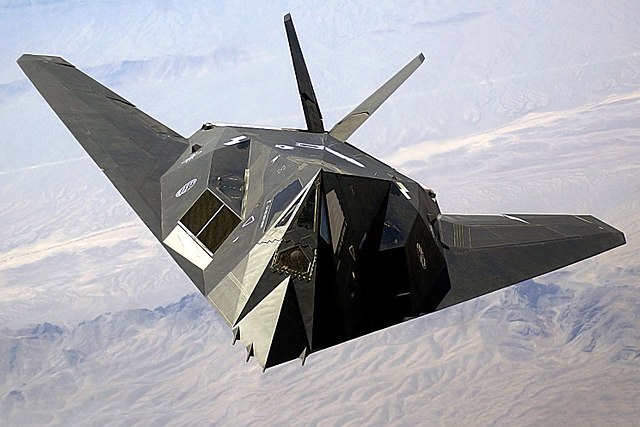 (image thanks to wikimedia)

Note the sharp angular surfaces, making sure the beam is not scattered back to the radar.

Noise cancelling headphones. Well, bodyphones. I mean, you want to make it so that the "noise" received from the outside enters and simply disappears. This means it is converted into local energy by being actively cancelled out by the opposite phase signal. This can be done by making a metamaterial that has a 'negative permittivity' - instead of being an insulator, which lets the signal through without reflecting or blocking it, the material actively cancels out the signal.

Spurious signals. Depending on your "metamaterial", there may be a delay before it starts actively cancelling the signal, which could be a blip on someone's very sensitive radar. But imagine you had a chameleon which concealed its own outline even as it displayed a blip on its body that zooms off to one side. Would your eyes follow the chameleon, or the blip? Similarly, you could try to confuse the radar by sending back "reflections" at times of your own choosing, to seem like you are further away and moving away fast. That said, quantum encryption is a thing now, and I imagine the military has ways of talking to itself to see if the photons it sent are 100% consistent with the coupled photons it examined. If they plot the percent consistency between their blip and the returns and there is a peak at a point where the reflection seemed weak but the consistency was higher, I imagine you're up for company.

Reflecting planes. The person who posted the stealth bomber can't be wrong - yes, directing the signal away from the radar seems like a good idea. Still, if you can have flying elephants I wonder if your adversaries have a bunch of Mickey Mouse satellites capable of looking for stray radar reflections when asked.

Not the answer you're looking for? Browse other questions tagged science-based creature-design electricity or ask your own question.

6
What would be the immediate effects of no electric current?
1
Is it possible to erect an electric fence in medieval period?
3
Would it be possible to construct an electric generator using only ionic conductors like salt water?
2
The Electric Dragon
17
Electric power system connecting the Earth and the Moon
7
What would it take for a plant to produce electric shocks?
1
What would happen to nuclear plants if all the electric stuff would just overload and burn out?