Setting up a bonfire in a methane rich atmosphere: is it possible?

I am trying to describe the exploration of an hypothetical planet with a hydrocarbon rich atmosphere. Atmospheric pressure is around 1 bar, temperature around 10-20 Celsius, the main component of the atmosphere is methane, around 80%, the rest being water, CO2 and other gases.

I am trying to see if it is possible for the exploration party to use fire, at least for producing light and preparing food.

A quite obvious solution is to have them use a canister of oxygen attached to a burner like we have in Earthly methane kitchen, where oxygen and methane get mixed and then burned.

I want to see if there is any way to have something a bit more "wild" looking, like a bonfire.

Is it plausible to have a substance which:

I am not concerned about the color of the flame: a bit of sodium can be added to make the flame more suited for producing visible light if needed.

The wonderful world of chemistry is full of oxidising agents that would fulfill your requirements, but I'd say the one that's perhaps most familiar to people will be saltpetre, or potassium nitrate. It exists in a natural mineral form, and can obviously be produced in bulk by pre-industrial means that are well over a thousand years old.

Sodium nitrate would also work... once known as "Chilean Saltpetre", it occurs naturally there in mineral form and was commercially exploited. It could be a source of sodium for your pretty firework needs. In the real world it is deliquescent (eg. it'll go soggy from moisture in the air; a bad thing if you wanted to burn it) but that might be less of a problem in your alien environment.

Sodium chlorate will sustain a fire in this environment

Leaving aside where it comes from for the moment, this is literally exactly what you need. A solid, that when heated (even in an oxygen deprived environment) to over 260 degrees C will emit oxygen and more heat, until all its mass is converted to salt and oxygen.

This is such a wonderful oxygen generator that it's what produces the oxygen in those drop down oxygen masks in passenger aircraft. Its exothermic and will self sustain a fire even in a sealed oxygen-free chamber. See the crash of ValuJet Flight 592 for an example of how much heat and oxygen these things can put out in a sealed room.

We usually see it as a powder, but when exposed to a little bit of water in the atmosphere clumps together into something that could conceivably be thrown on a fire rather than "sprinkled".

Now where does it come from? Technically this doesn't occur in nature; This is easy to produce in bulk as a fertilizer. Now I'm led to believe there are alternative way to produce this by what I'm reading about electrolysis alternatives but I lack the chemistry knowledge to give you a clear natural process to create it.

Hydrogen Peroxide has historically been used as an oxidizing agent in rocket fuels. In your Methane rich environment, the heat of a flame would cause Hydrogen Peroxide to break down into water and oxygen. The oxygen would then react with your methane creating sustained combustion. While there are more efficient oxidizers like Chlorine Trifluoride, the H2O2 does not make toxic byproducts which you want to avoid with the applications you have in mind.

It is also relatively cheap/easy to mass produce compared to other options. Since your explores are in a remote location, you do not want to need a giant chemical plant to make the stuff, but using the Anthraquinone Electrolysis method (see: https://news.mit.edu/2019/mit-process-could-make-hydrogen-peroxide-available-remote-places-1023), your explores can produce as much hydrogen peroxide as they need using only water, electricity, and anthraquinone which can be infinitely recycled.

This would allow not just exploration of the planet, but a potential for long term habitability.

bonus point if it is something which can occur naturally, given the right conditions

Now this part will be a bit more of a stretch since it will depend a lot on the biology of your native lifeforms. On Earth, the highest concentrations of natural hydrogen peroxide are found inside of plants and animals, but still in relatively small quantities... that said, perhaps your organisms use it differently then we do on Earth. Theoretically, your native life forms could use H2O2 instead of glucose for energy storage. If this is the case, then your plants could have large concentrations of H2O2 inside of them; so, your explorers could just cut down the local flora, and burn it just like we do with wood here on earth. 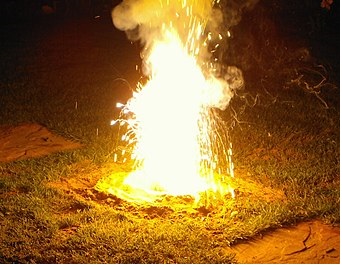 Gather round the Thermite bonfire you all! Goggles recommended. Iron oxide is solid but with enough heat and some willing aluminum it will give up its oxygen. A very bonfirey heat and light ensues. You can keep your bonfire wires in the hold of your ship and produce a merry fire wherever you touch down.

11
Could a Neptune like Gas Giant support life?
1
Water replacement on a world with a nitrogen-rich atmosphere
7
Weather Effects in CO2 + Methane Atmosphere Planet?
9
Sustainability of Regular Global Wildfires Due to Oxygen Rich Atmosphere
5
Carbon Monoxide Rich Atmosphere
3
What is the most plausible way to do electronic respiration in humans?
6
How would huge chunks of floating land soaring the skies really fast affect my world?