How would a civilization of marine life avoid human detection?

I would like to know how the civilization of marine life would be able to avoid human detection, and ( if this isn't off-topic) to defend themselves in the case that a human did detect them so that a human doesn't get to escape to tell the tale.

These are the base conditions of this world:

It would depend heavily on their tech level. It would be relatively easy for a Stone Age hunter-gatherer or an iron-smelting civilization to hide, but it would be a lot harder for any civilization that has become industrialized. One of the characteristics of high-tech human society is a huge ecological footprint: large areas cleared for farmland, megafauna wiped out either because they pose a threat or are an easy source of food, that sort of thing. Perhaps most notably, humans would keep noticing non-human artificial objects washing up on shore similar to giant squid, and if they are industrialized they would notice that someone seems to be contributing to global warming that isn't human.

That said, it would actually be a lot harder to hide a civilization in the sea than science fiction and nature documentaries make it out to be. Yes, the sea is unimaginably big, we haven't explored most of it, and there are lots of deep sea crevasses where a species could hide. The problem is most of the ocean is relatively empty. 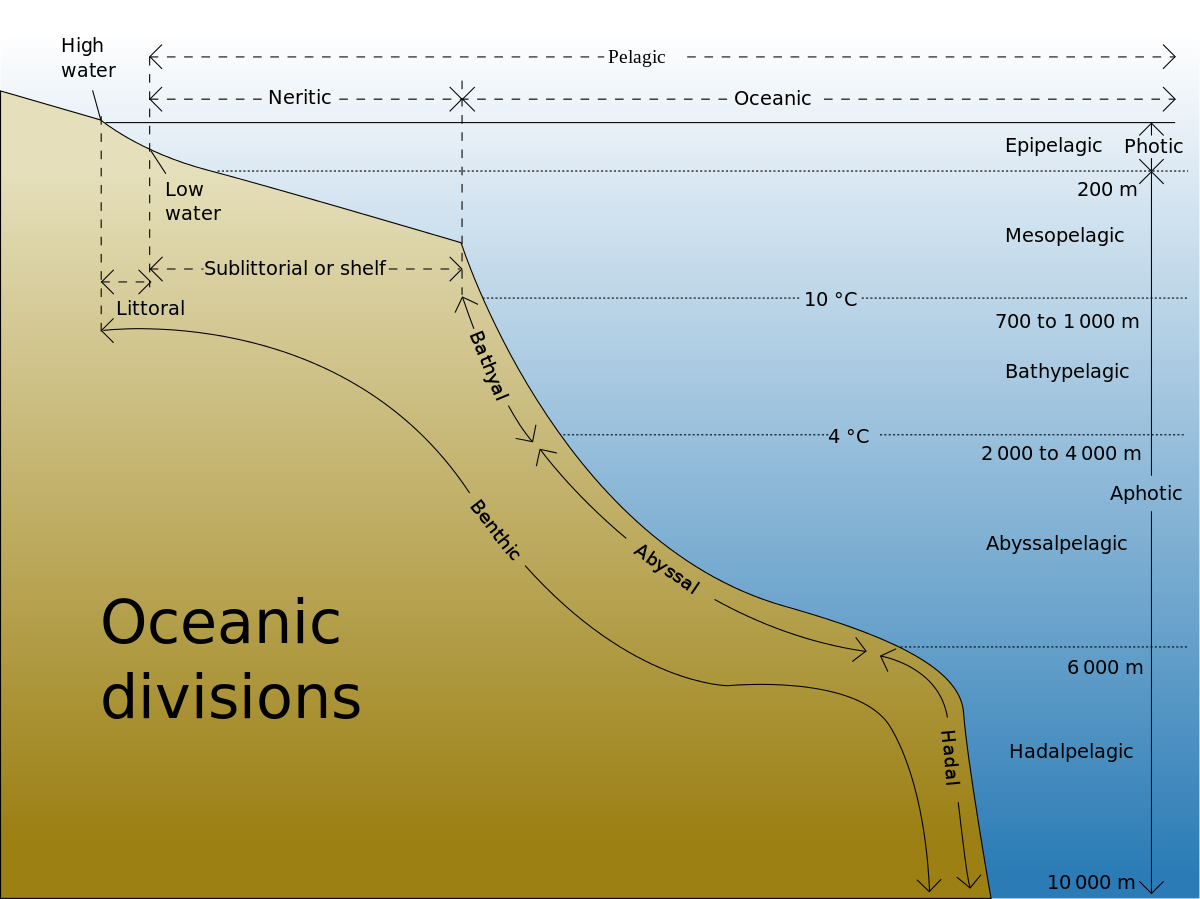 Most of what we think of as "the ocean" is actually what is often described as a "marine desert". There really isn't a lot there. The biomass here is incredibly low per square km, and most of the non-planktonic wildlife are larger animals that can migrate long distances in search of food (e.g., oceanic whitetip reef sharks, many other large sharks, tuna, marlin, manta rays, baleen whales, dolphins, etc.). Food is very scarce and animals will often travel for miles to congregate at food-rich locations. But more importantly there is almost no standing biomass beyond phytoplankton, because there is no bottom, and hence no algae growing on the seafloor. Light diffuses very quickly and photosynthesis is possible over a relatively short depth.

The deep sea floor (bathypelagic onwards) has a lot of space to hide, but nutrients are incredibly scarce down there. Many species in this zone can go years without eating and have incredibly slow metabolisms to survive the long periods between food. Food itself is mostly limited to whale falls, marine snow, and what else these animals can catch.

The mesopelagic zone actually contains about 95% of Earths marine fish biomass, but it's not clear if that's due to the fact that the zone is just so big or that humans have just depleted coastal fisheries so heavily and only the really inaccessible fishes are left. Food is still said to be patchy here. Also there is still the problem of no bottom, and thus no easily accessible mineral or stone deposits to build tools, space to grow crops, or places that can support buildings.

The problem is the good regions to build an aquatic civilization are all on the continental shelf, the region that extends about 65 km (40 miles) off the shoreline and is only about 60 m (200 feet) deep. That's actually the sunken edges of the continents, and beyond that the seafloor plunges straight down pretty sharply until it hits the marine crust (which is often a couple miles/kilometers deep). This is where most of the marine life people know of lives, and it's the region that has the highest primary productivity. It has the most habitat diversity and the most species diversity, being the zones that coral reefs live in. It's also the part of the ocean in which there is a well-defined sea bottom that still has light reach it, and therefore abundant algae, space to build structures, as well as access to stones and other natural materials like iron ore, corals, etc. All the sediment coming off the land also helps with fertility. The continental shelf is the ideal area to build a civilization.

Problem is, this is also the region of the ocean that is most easily accessible to humanity, and the one which humans have been fishing for thousands of years. Humanity's increasing pressure on the coastal ecosystems would eventually clash with the aquatic civilization, and the two would be forced to compete for resources. Given how many continental fisheries like the New England cod fishery are all but gone, it's hard to see how the aquatic civilization would have let this stand without warfare, as they are far more dependent on seafood than humans. Local fishers and seafarers would have also noticed them, especially if they were highly organized and with an advanced technology level. Whalers would have been very interested in them, not for actual hunting but because paying attention to big marine animals is their job. Look at Moby Dick, which was written by a guy who had whale-hunting experience, and the biologist Georg Wilhelm Steller, who worked as part of a whaling expedition. Both payed a lot of attention to large marine life.

This isn't even getting into sonar. Once international militaries start using sonar, or the marine civilization starts using sonar of their own to communicate (because if it works for whales and humans it would probably work well for them), they would be instantly found. At the very least by World War II, where the Allies and Axis would likely think the sounds of the aquatic civilization were signs of their respective enemies before finding their signals to be non-human. Indeed, something like this really happened during World War II with the invention of sonar. The big thing about sonar is it's really hard to miss because it's sound and hence is broadcast to everyone in listening distance, which is one reason why IRL whales are being driven nuts by being trapped in the realm of eternal dubstep caused by human sonar and why detecting enemy submarines by picking up on their own sonar is a thing.

There just really isn't enough productivity in the rest of the ocean to support a functioning civilization. The epipelagic zone is mostly sterile, the mesopelagic zone could at best support hunter-gatherers that did not use tools (so little different than whales), and the deep sea floor, despite having abundant mineral resources, just plain lacks enough food to sustain a civilization with no easy way to produce it (because you can't grow anything down there in sufficient quantities to feed a population).

The ocean folks are very small.

The ocean is already big, and it is even bigger for these tiny entities. What detritus their civilization produces that could make its way to land or fishing nets is not recognized as products of intelligence. Fishing nets are easily avoided and submersible robots can be seen and heard from great distances and avoided. Their cities occupy only a few hundred square meters and only amazing luck (bad or good depending on viewpoint) would allow them to be discovered.

This solution fails if your fiction requires humanoid aqua-hotties in tight costumes. But actually only if you need human sized humanoid hotties. Tiny aqua people can be hot too!

We, in our real world, are still deeply ignorant of what lurks in the depths of the oceans. We know better then surface of the Moon than the depth of the abyss above which we ship our containers.

The oceans are so vast that one needs to put effort in finding something, not in hiding it. Of many sea creatures we know they exist just because sometimes we stumble on their rotting corpses on our beaches, but we have yet to see one of them alive.

As long as they stay away from the intercontinental cables and oil rigs, they won't be noticed. Or they can always frame the sharks for chewing those pesky fiber optic cables running in the backyard of Qwstryqpi's home.

They don't have to hide so long as they only live more than a mile below the water. Cameras or submersibles of any kind that can image below one mile are very rare, and curiously enough, subject to export control bureaucracy. If you see research being done down there, it's almost always with the Alvin. [apparently the Deepsea Challenger was destroyed by burning truck brakes? Odd...] So odds are no one would have found your civilization - even if they had no inkling they needed to conceal themselves.

I would recommend reading The Swarm by Frank Schätzing. A great sci-fi with a sentient species of single celled creatures that is governed by a hivemind that uses biotechnology and sea creatures to stop humans from destroying the oceans. https://en.wikipedia.org/wiki/The_Swarm_(Schätzing_novel)

Not the answer you're looking for? Browse other questions tagged science-based reality-check civilization worldbuilding-process ocean .

6
When is the latest a population of merfolk could have inhabited Zealandia without humans getting conclusive proof of their existence?

11
How would human society develop if humans had gills?
6
Could Human Civilization Survive Hypercanes?
27
On a world where everyone is nomadic, how does civilization start?
20
Why build underwater outposts, rather than ocean-surface settlements?
10
How advanced would human civilization get if it was destroyed by insects every 20 years?
4
How can primitive human species create an underwater civilization and adapt to their marine environment?
3
How would airbubbles/moonpools be achieved in a deepwater marine mammal civilisation?
6
When is the latest a population of merfolk could have inhabited Zealandia without humans getting conclusive proof of their existence?