What factors influence what kind of shoreline you get?

I'm writing about a group of colonists on an Earthlike world, where I want to get the geography realistically correct, and it occurs to me that one thing I have not really seen discussed is the nature of the shoreline.

It actually matters to the colony what kind of shoreline they have, because if it's a beach, walking along it is many times easier than trekking through jungle.

So the setting is a world similar to Earth in the relevant ways, a continental shore (not a lake or inland sea, but shoreline directly exposed to the open ocean) with jungle inland, and from what I can remember seeing of various terrestrial locations, there are basically three types of shoreline:

So what are the factors that determine which kind of coast will be present? Is there a realistic limit to how long a stretch of the continental coast will be beach?

Local orography and currents are what mostly determine how a coast look like.

Orography: the local slope of the terrain will influence how the land/water interface will look like, if you will have fjords or a straight coast line. A steeper slope will make deposition of sediments more difficult, a more gentle slope will make it easier.

Currents: moving the sediment around, they will determine if there will be a beach or not, depending on their effect on the sediment flow. The sea village where I went when I was a kid had a small harbor in a gulf with 4 small islands lined right out if it, parallel to the coast. At a certain point they decided it was smart to join the first two to land by filling the gap between them. This messed up with the currents and now the harbor is constantly being filled with sand while before it was kept clear by the currents.

You are making it up! Unless you have some constraints as regards location, you can have their environment be what you want it to be to make your story good. Even better, you can imagine somewhere on Earth that is like where they are and just lift real geographical information off the map. Then you can figure out there comings and goings on a real piece of geography which will be a good mental aid.

Below is a map of the coast of Belize which looks to have a long beach backed by jungle. 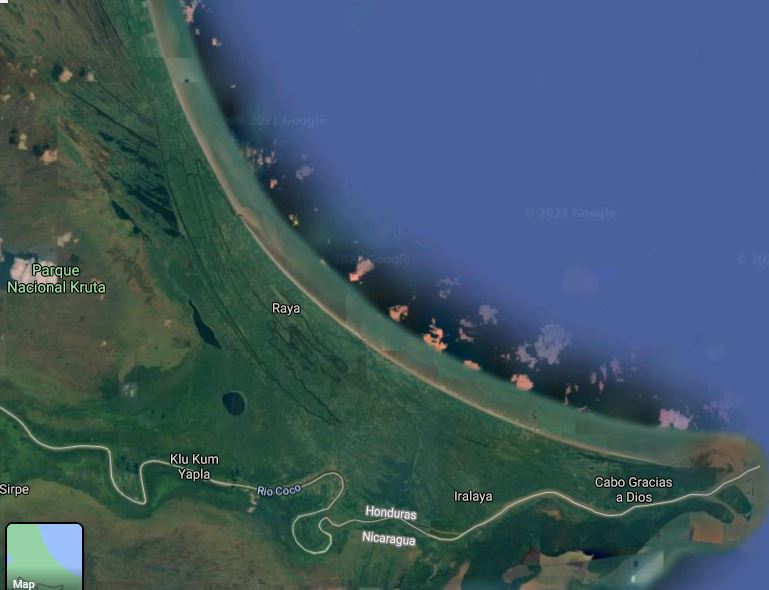 If your folks were in country that had been glaciated there might be steeper cliffs and little beach but it would probably not be tropical. As you correctly note there are places where dry land grades through salt marsh or mangroves on the way to ocean and it can be tough going. If you want places like that, go to the Florida coast and lift shoreline from there.

The main factors are the composition of the local soil, the land slope, idrography (mainly how much silt is being dumped seaward by the rivers), climate and time.

Then you must consider the characteristics of the tides and currents (influenced by the land slope but also by the wider body of water's shape and orientation).

No significant tides, and erosion will take ages to ground rocks into sand. Large tides and the sand will be swept away, and if the ground slopes too much, it will be swept so far away that the coast will slowly erode, but no beaches will form. Tides depend on the presence of moons and distance to the primary, but also on the shape of the coastline (a "funnel" rotationward will create a tidal bore that channels the tidal bulge and gets you a Dragon Tide).

Strong currents going more or less tangentially down a coast, with significant but not excessive rip currents and a flattish, not too deep shelf will rapidly grind the coastal rocks to sand. This is what happens on my own home coast; near old sea forts you can find round, smooth pebbles coming from bricks, rocks and ceramic or glass fragments that were whole just maybe a century ago. Another thousand years and they'll be sand.

Flat continental shelf near the coast, reasonable tides, hot, humid climate and lots of silt (w/ nutrients) being slowly drained into the sea (even better if they're carried by a long and winding river full of organic substances), and you'll get a jungle delta estuary, possibly with algal analogues up to a considerable distance out to sea.

I live in a coastal community and I strongly suggest researching coast lines in areas that have a similar climate to your location. The weather will affect the currents and tides which will affect the shape of the coast line, etc. The climate will affect the marine life, which will dictate which type of sand, etc will be on the coast line. The makeup of any environment is complex, but it is extremely evident in any coastal environments how interconnected life is. For example, I live on the Gulf of Mexico and the sand is white and soft due to high calcium deposits from microscopic marine animals. We do not have a rocky coast line or natural reefs, due to the nature of us having an extremely unique tides and currents. The tides push sand and shells, bones, etc. onto the shoreline and deposit them, as opposed to having tide pools. Because there is nothing but sand bottom along the coast line, we do not have large kelp like they would in the pacific coast, and we do not have large fish and other marine animals that live in kelp forests off the coast. Right on the coast we mostly have small to medium schooling fish, and larger predators like sharks would hunt them a little ways off the coast in the surf zone, or they may come closer to shore over a sand bar, which forces the fish to school in shallower water, making it easier for a shark to hunt without risking running aground.

The coastline paradox is the counterintuitive observation that the coastline of a landmass does not have a well-defined length. This results from the fractal curve-like properties of coastlines, i.e., the fact that a coastline typically has a fractal dimension (which in fact makes the notion of length inapplicable). The first recorded observation of this phenomenon was by Lewis Fry Richardson1 and it was expanded upon by Benoit Mandelbrot.[2]

And coastlines are never static. They are dynamic, always changing. Erosion can change a sand beach into a rocky shoreline. A minor change in climate or an invasive species can completely change the flora and fauna.

The only rule is that there are no rules. Even on Mars, predictability is non-existent. Just when we think we have the landscape figured out, classified, and categorized, an exception comes along i the very next picture.

Not the answer you're looking for? Browse other questions tagged science-based geography geology coasts or ask your own question.

7
What do we get if we eat the moon?
2
What would perforating the crust of a continent do?
2
If I was to tunnel straight through a mountain, what kind of rock would I find?
7
Barycentric influence on plate tectonics
1
What kind of gas would allow a rock to float? And what kind of rock would it be?
2
what kind of natural disaster can affect earth on a planetary scale?
5
Factors that determine the geology of a planet (what factors determine the elemental composition of the planet)
3
Would this be a plausible coastline + river combo?