A lot of people making maps for their worlds forget to consider the projection they are using when they start mapping but often need to deal with the issue later. If no projection is chosen, I usually make the assumption that their map is made with the equirectangular projection.

One of my concern is that, the equirectangular stretches the high latitudes and this can be a problem when calculating the distances.

Equirectangular is by far the easiest to start with and fairly intuitive. It is quick to make in almost any software and pretty instantly recognisable as a map. It has been around since ~100AD, so even characters in you world should be familiar with it.

You will have a problem with distortion at the poles, so directly measuring distance is out of the question:

Calculating accurate distances is not impossible! As long as your map has latitude and longitude lines (you can overlay them digitally, or with transparency), you can calculate distance with this online tool or the Haversine formula.
You can do it yourself with a decent calculator:

The Mercator projection is horrible and evil distorts the poles horribly and makes Greenland look fat:

It cannot show the poles, and faces severe distortion issues which make Equirectangular projection look tame. It is also difficult to calculate distances unless you happen to be sailing a ship near the equator. Wikipedia had this to say:

Converting ruler distance on the Mercator map into true (great circle) distance on the sphere is straightforward along the equator but nowhere else. One problem is the variation of scale with latitude, and another is that straight lines on the map (rhumb lines), other than the meridians or the equator, do not correspond to great circles.

Another map projection, and a particular favourite of mine, is the Dymaxion map. As knave mentions, this map has very little distortion on each individual 'chunk', as is shown here:

You can easily measure distance with a ruler on a Dymaxion map, but crossing between non-contiguous chunks is a bit of a hurdle. While there is very little distortion, the Dymaxion map is not intuitive or easy to grasp when drawing your map.

There are many other map projections too. The equirectangular projection however is well studied and easy to make. At this time, it is the easiest to make and distances can be accurately measured if you don't mind overlaying latitude/longitude lines and doing some calculations.

Ever since I was a 10 year old making (Basic) Dungeons & Dragons maps of the world, I used hex graph paper. Scale the map with hexes by latitude and your map will always approximate a round world (think of a Buckyball). 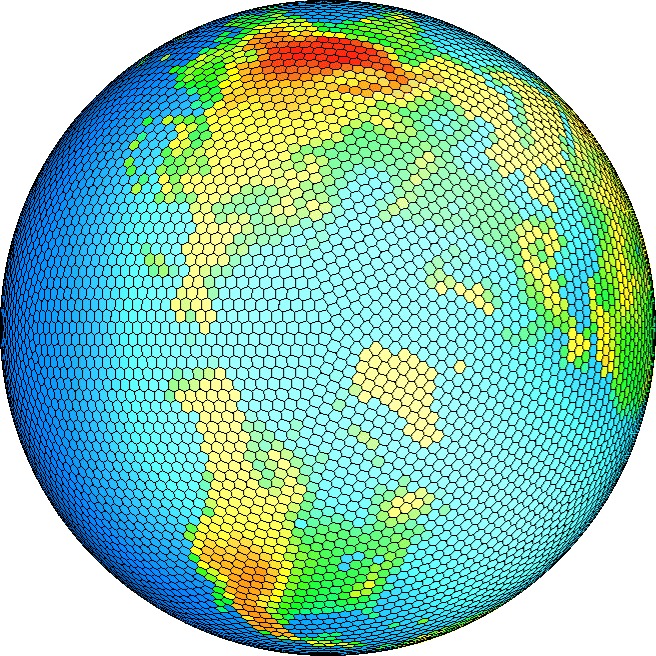 Ancient people who were ocean-faring knew that different projections have different properties, and you need 2 of them for open-sea navigation.

Most maps drawn for getting around might not be to scale exactly, and implicitly flattened along routes and distorted in voids. If you don't notice the measuring problems, you don't think about it.

Things like Egyption property lines were drawn accuratly to scale. It would be flat, as it's only long enough to show curvature in one direction so it rolls up like a ribbon. Would you need (and have technology to produce) scale maps over large enough regions to show curvature?

Laying a wodden floor, I had trouble initially and eventually puzzled it out: unnoticeable irregularities in the concrete slab were enough to cause parallel lines to converge and diverge on the scale of jointed planks. So laying roads the fact that a neat grid doesn't work might not be obvious due to overall Earth curvature, but every little hill and tiny rise is enough to make you have to fudge the "straight lines". Does a map projection cover this detailed topology? A city map might simply treat the global curvature in the same way.

There is no reason to presume that everyone creating a universe is making spherical planets. The reason we have spherical because of the space/time curvature laws that when applied on a macro scale, turn any large object into a semi-spherical object over a reasonable period of time.

However, in a universe where such laws are not applicable, the planets or other objects might not be spherical. They might be square.

Additionally, even in a universe with similar space/time laws, if the world is designed (as opposed to naturally formed), it is entirely possible for it to have an unorthodox shape.

Not the answer you're looking for? Browse other questions tagged map-making or ask your own question.

10
How do I design a map that looks old?
39
How to go about creating an “inaccurate” map?
9
Which map projection would result in an accurate visual depiction of a mega crater?
2
How do I convert part of a south pole map to a mercator projection?
6
Rotating a map projection - software question
7
What are the most useful projection types for my world map?
5
Rock layers in Procedural Map Creation
6
Climate Map Climate