What could have caused a three-way cold war?

I was working on a story project some years ago which featured a highly alternate near future in which, among other things, a 3-way cold war had spread across the solar system. There were many other F&SF aspects mostly irrelevant to this question, so I'm not (necessarily) asking for why space travel developed faster in this world. The issue is...

What could lead to a post-WW2 world where Western Allies, Communists and fascists are locked in a three-way standoff?

The real WW2 featured a team-up of the "West" and "East" Blocs against the "Central", which broke down into a conflict between the winning alliance. Axis victory scenarios typically lead to a Cold War, but of the variety "East loses, standoff between West and Center"; the USSR is conquered, or reduced to a rump state that's no longer a great power.

My first idea was "A plot to kill Hitler succeeded." Post-Hitler Germany was then able to secure a truce, USA-USSR relations break down without a common enemy, all 3 sides develop the atomic bomb, an unconquered Germany is first into space... I don't think that's a good answer, though. It ignores that Axis =/= Germany. Germany (almost) alone can't come close enough to matching the industrial power of the other two blocs, thus can't credibly sustain a cold war with them for generations. So I'm asking for something better.

No, "WW2 didn't happen" isn't an acceptable answer, even though the desired "present" situation bears some resemblance to the pre-WW2 situation. Some kind of major war has to have still happened circa 1940.

The key to your scenario is the phrase "stand-off". In the real world, that two party stand-off was created by the presence of nuclear weapons and the threat of mutual insured destruction. There is no reason that this proven source of stand-off couldn't be spread across more participants.

You are embracing an alternative near-future which already involves accelerated technological growth. Why not start that acceleration a little earlier by allowing all three of the would-be super powers to master weaponized nuclear fusion at approximately the same time. If within a few weeks of each other, each of the major powers proved their nuclear capacity by annihilating an enemy city, they might very quickly find themselves equally motivated to negotiate for peace. And once peace is achieved, a three-way cold war can smolder on slowly for as long as your story needs.

So the question becomes, how do you justify a simultaneous scientific discovery to your readers? Personally, I would use spies.

Britain falls, US fights Japan but not Germany

It is hard to imagine an alternate history where Germany defeats the US. But imagine Britain going under in 1940 or early 1941. The mechanisms for that might include

The US is denied a staging base close to the continent, and anyway they have been grievously hit by the Japanese. Again going on a limb, Japan realized that simply bombing Pearl Harbor would enrage America but not cripple it, so they gambled to add an invasion force to the mix. (Closer possessions like the Philippines were to wither on the limb once Hawaii fell.) The US still wins, but it is clearly Pacific First for them.

Meanwhile, the Nazis concentrate on the Russians. The fight goes slightly better than it did historically, with no lend-lease for the Soviet Union and more of the limited German manpower. The Nazis still get bogged down in the vast eastern steppes because

Imagine a costly stalemate, with Stalingrad repeated in Kazan, Samara, Moscow, Perm. Both sides bleed each other dry.

It is hard to imagine that the situation above would lead to Korean-style armistice negotiations, but perhaps they do. Replace both dictators by more reasonable men at a late stage?

All three sides had nuclear programs from 43 or 44 onwards. The American one was the most advanced, but still severely limited in the number of bombs they could produce. One or two dozen would not enable a transatlantic invasion, and the US didn't have more than that until the East Front armistice. Both Nazis and Soviets were in the single digits. They might have used them on tactical targets, or not, either way they failed to break the stalemate. Neither side had air forces to reach the enemy industrial centers.

The USSR now is Siberia and Soviet central Asia. The capital of the US is now Shreveport, LA. Neither country is now a super power.

Fascism however is alive and well in South America, and Argentina now occupies the entire continent up to the Panama canal, with the exception of a small remnant Brazil. Allied with Argentina is Franco's Spain as well as a confederacy of West African nations.

Communist china made the same mistakes it did in our timeline but now has gotten its act together. Absent containment by the US and USSR, China began aggressive expansionism and has acquired Japan, Korea and is in the process of doing the same for Southeast Asia.

Europe also suffered in the nuclear exchange with the UK suffering a fate similar to the US. Central europe fared better and with the fall of the USSR the EU acquired many nations once in the orbit of the USSR.

None of these countries are the formidable powers that the US or USSR were in their heydays and so this scenario is 2 steps away from what was. Mixing it up more means less constraint from actual history, while still keeping the fun elements of actual history.

Well, a cold war in an era where humans have spread around the solar system is rather easy because wide access to WMDs (big rocks) is available. Provided you know where the enemy is, you can accelerate some asteroids and set up their trajectories in a manner where they would be extremely difficult to block. Big rocks falling from space onto planets, moons, or into space stations would be far more destructive than nuclear weaponry.

Because of this, I personally doubt the assertion that Germany wouldn't be able to hold a multi-generational cold war. If they have access to WMD's (nukes or asteroid impactors), they can "play at the big boys table" even from a position of weakness for an extended period of time.

As for WWII, this is my personal opinion on how you could accomplish this (but keep in mind I'm not a historian):

First, the superpowers that end up are the "West", Germany, and the USSR. While Japan in WWII had some unmatched advantages such as their unbreakable morale and superior aircraft at the beginning of the war, I'm of the opinion that their war against the USA and the other Allied nations was always doomed to failure. Their cultural attitude towards the war blinded them towards strategies that eventually led to their defeat and they simply didn't have the resources or economic umpf to not get simply stepped on by the USA once their wartime production got into swing. Furthermore, their allies in Germany and Italy were too far away to really assist and while there is some unusually high cultural compatibility with the Germans and the Japanese of the time, the only reason they're on the same side (in my, non-educated opinion) is that they're so far apart. Japan wanted Imperialism and Germany was far enough away that they'd never need to fight each other.

As for how to prevent Germany from losing the war? Easy, just make it so that when Hitler ascends to power, he's unable to install his party as leadership too. For some reason (this can be really minor like one politician who's more charismatic or one person who dies at the wrong time), his coup of the German government fails, and while he becomes a popular figurehead and chancellor of the German people, he ends up not in charge of the military strategy. WWII still happens though, because it's generally popular among the high-politics of Germany at the time. The difference is that Germany "wins" though: Instead of having Hitler in charge, competent generals and politicians decide on military strategy and avoid things like fighting the war on two fronts (maybe only engage Russia minimally) and they also avoid the atrocities like gas chambers (which were Hitler's pet project). The Reich still ends up Nationalistic and Hitler's antisemitism is still popular, but things don't get bad enough that the countries get their knickers in a twist over moral indignation. Germany ends up conquering most of central Europe up to the Spanish border, and controls basically everything as seen in this map except maybe not so far to the East because they avoid conflict with Russia: 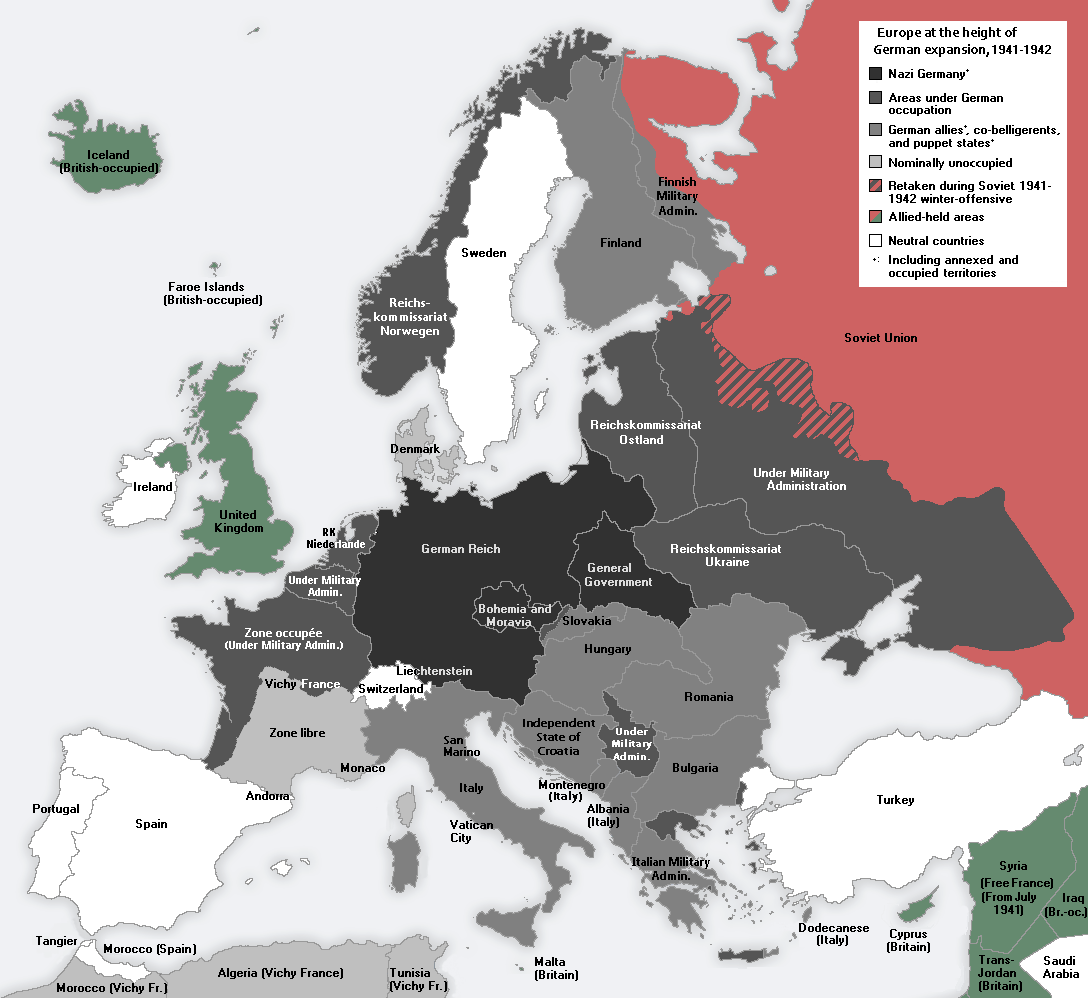 Once Germany has control over basically all of continental Europe barring Spain and Turkey, instead of fighting Russia and the UK, the competent leadership decides that enough is enough and the nation turns to fortifying and concentrating their control over their new nation. With this much land and so many people under their control, there's no reason that the German Nation wouldn't be a superpower to rival the USSR and the Allies.

Not the answer you're looking for? Browse other questions tagged alternate-history .