I'm sure you have questions, so here's the idea: I want to include T.rex in my world as a "boss" monster, but due to research on Quora on T.rex's ability to survive against modern weaponry (firearms) and spears, I have decided that T.rex needs a few upgrades.

I intend to give T-rex proportional arms to take away these Cons and therefore make T-rex a more viable opponent. Therefore, my question is: Would Proportionate Arms Increase a T-rex's Survivability and Lethality?

As always, I appreciate your input and feedback, thank you all so much! Finally, if you decide to downvote or VTC, please give me an explanation so I can improve the question.

Proportionate arms would mean giving a t-rex more incentive to use them.

Assuming the t-rex starts to gain intelligence, proportionate arms would allow them to more easily use tools without losing balance.

On top of that, proportional arms combined with the sheer size and power of the t-rex would allow it to handle larger weapons than humans. Let's do a graphical comparison below.

The following, personally hand-drawn t-rex obviously looks great and very realistic. However, as good and life-like as it looks, how could those grubby little human arms support that weapon fitting for an apex predator? A few shots would probably make the t-rex lose balance. 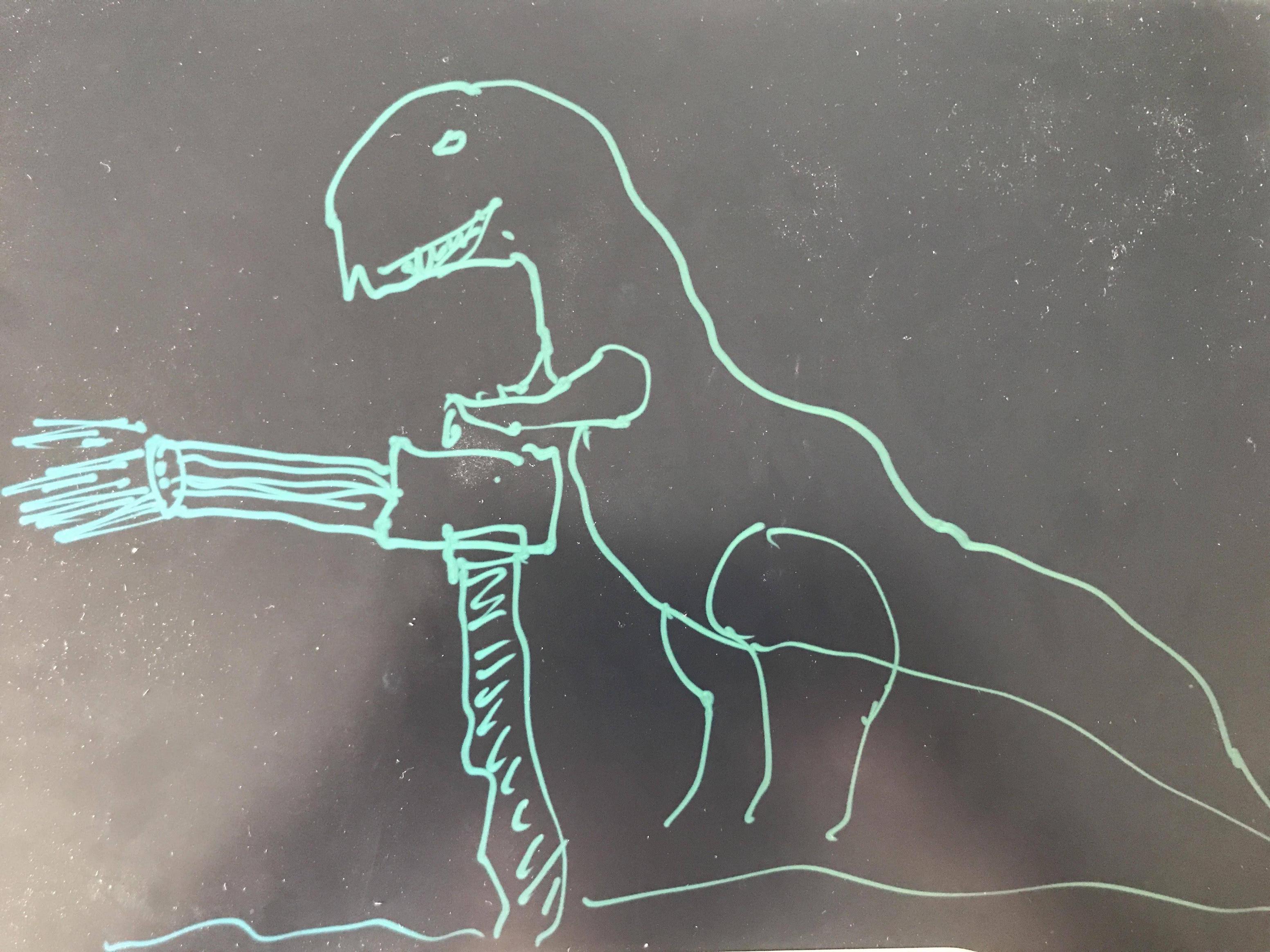 Conversely, with proportionate arms and a more balanced, proportionate body, the t-rex could hold its ground and allow it to use big, bad weapons fitting of its status: 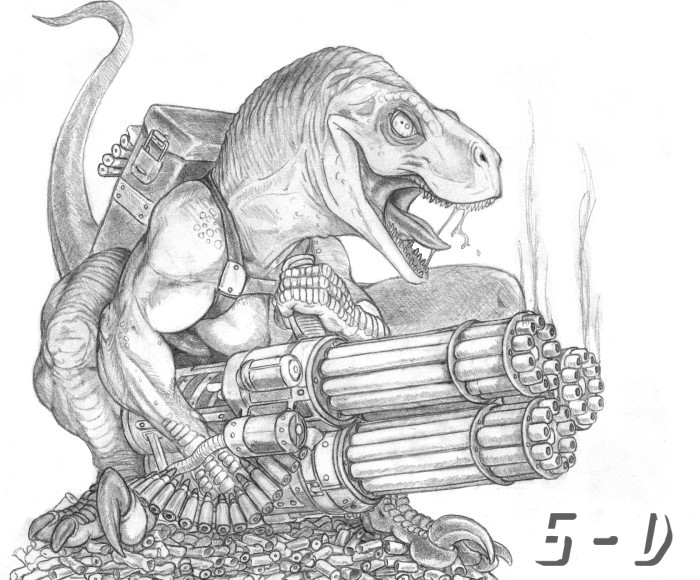 Proportionate arms would incentivize a t-rex to use them. Combined with some intelligence and proper tool usage, a t-rex would conceivably become more lethal than originally. The ability to use tools would hopefully make up for the decreased bite strength.

Obviously, a t-rex may not be able to get its hands on advanced tech like miniguns (as implied in the previous section), but a proper ultra-zweihander or even a large stone club would make them into veritable dark souls bosses.

The arms aren't the issue. Size is.

As a adult? Humans per se would be too small to be an attractive prey species for a T Rex because the amount of nourishment gained from chasing/hunting them is not sufficient to warrant the effort. It's the same reason you don't see lions as a rule hunting small game like rabbit. All predators tend to specialize in game species that represent the best trade off between the effort and risk involved in hunting them and the energy gained by eating them. So using the African savanna as an example you have small cats like the caracal which hunts birds, rodents and other small mammals, cheetahs hunt small antelopes and lions focus on larger mammals like zebra and wildebeest.

During its young/juvenile phase? possibly yes they might hunt humans but all the evidence indicates that T Rex like other dinosaurs grew very rapidly so humans wouldn't be a preferred meal size for long.

All of the above is also based on the assumption of course that Rexy was purely an active hunter though. As far a I am aware there is still ongoing argument about how much of its nutrition was gained via scavenging/scaring smaller predators off their kills. Basically the more they scavenged the less they hunted.

As far as the arms go? It doesn't really matter one way or the other. Allosaurus was a highly successful genus of large active hunters with well developed forearms that used them capture and hold prey. T Rex did just as well without them. Also and given the size difference between humans and an adult T Rexs longer arms wouldn't really help much at all. They were 4 meters tall! Even with well developed arms like Allosaurus they would almost certainly tend (I think) to overbalance and fall if they tried to reach down and grab a human - the animals center of gravity would be wrong for this kind of motion, at least at speed (and I can't see anybody standing around waiting to be eaten).

You'd be better of picking one of the smaller therapods as a key threat to humans, one that hunted in packs say. (But not velociraptor - they weren't much bigger than turkeys (mass wise)).

You need arms even bigger than that.

A human spine is more or less vertical straight up and down. Human arms extend forward from the same vertical plane as the head. I can thus reach something quite far away, grab it, and bring it to my mouth, and I do.

The TRex however is canted forward. Its spine is a diagonal or possibly nearly horizontal. Even if proportioned like a human, the arms would barely reach to the head. Anything the TRex approaches will be biteable before it is grabbable.

If you want the TRex to grab something like this delectable Take5 candy I have here and bring it to the mouth, the arms must be quite long. They would probably drag on the ground or be held out laterally as though the TRex were trying to take flight. If it actually were it could flap them hopefully. These arms would also shift balance forward requiring a longer or heavier tail as a counterbalance.

Human proportioned arms would however give Trexes another attack besides biting, stomping and tail whupping: rassling.

How do we know this? Simple: the Natural Selection which produced the T-Rex body plan already optimized for these goals, or at least a very similar one. And many other species of dinosaur have this same general design, so we know the T-Rex wasn't a fluke.

Of course, this doesn't apply if you're trying to guage survivability outside of Cretaceous-period Earth, or are prioritizing killing things above and beyond what's necessary for securing food/safety/breeding rights, but it's generally a good rule of thumb to assume that evolution does its job well.

Not the answer you're looking for? Browse other questions tagged science-based biology creature-design .

10
Making Part of the Planet Completely Inaccessible
2
Making a machine more human by making it race-condition prone. Is it enough?
9
Making Beaks More like Hands
4
Making Fortifications Viable in the Arms Race Again
2
What's the plausibility of making a body part invisible?
4
Making T-rex More Dangerous Part 2: Defenses and Durability
1
Making a Predator For Chompers
8
Why didn't the military give T-rex clones a bigger more powerful arms?
5
How to make air more electrically conductive without making it unbreathable?