When the acetylene ignites, there is about 250 cubic meters of acetylene/air mixture that is above the lower explosive limit of 2.5% Acetylene in a 1940's style naturally ventilated multistory concrete slab/brick veneer building with large glass windows.

My question is how large an explosion will occur? At what range is the explosion likely to break or crack windows?

Please do not dwell on the lack of safety implicit in this event being able to occur... I am well aware of it, and it is part of my story . Please focus solely on the damage that this event might inflict upon a university campus, including gardens, trees and other buildings, as well as the surrounding suburbs.

If these conditions will not cause an explosion, then please assume conditions in which an explosion will occur with this amount of acetylene, and provide a damage estimate from that starting point.

From a purely energetics viewpoint:

At atmospheric pressure, Acetylene in air does not detonate, it merely deflagrates very,very quickly.
You need to increase the pressure to 1.4-1.7 bar for detonation to occur.

Your building will undergo a huge fire, but with very little concussive force and no visible shockwave.

It sounds as if you want a detonation for your story, not a fireball? Add some oxygen!
It you can increase the atmospheric oxygen inside that building, you can achieve detonation.
Alternately: if the building is well sealed. Sufficiently so that the initial deflagration increases pressure to the required 1.4bar (not easy!!), then the remainder of the Acetylene will detonate. Realistically, this sort of thing would only occur in a sealed tunnel, or more usually in a pipe or similar small confined space.
Idea: Instead of leaking acetylene, just have a premix Oxy-Acetylene torch (not ignited) do the leaking. This will provide the suitable mix to have an explosive mixture, rather than a merely flammable one.

Deflagration vs. Detonation: the very basics.

Deflagration is burning of a material. The flame-front propagates subsonically. The resultant is a flamey fire, quite possibly in a fireball form. It releases a lot of energy in the form of heat, but the release rate occurs over a number of seconds, and there is virtually no shockwave just a whoosh.
Example: a trail of gunpower burning.
ALSO example: a keg of gunpowder exploding. Yes, that is not a detonation it is a very energetic deflagration.

Detonation is burning, but with the flame-front propagating at supersonic speed. Combustion thus occurs in a tiny fraction of a second. While total energy release is similar to a deflagration of the same components, the energy is concentrated over a much smaller timespan, typically milliseconds or less. A detonation releases less of its energy as simple heat, and (much) more as a shockwave. Detonations are immensely damaging to matter around them, but do not cause much fire.
Example: a Stick of Dynamite exploding. Another example: The 2020 Beirut explosion.

This is what 7 cubic meters does: 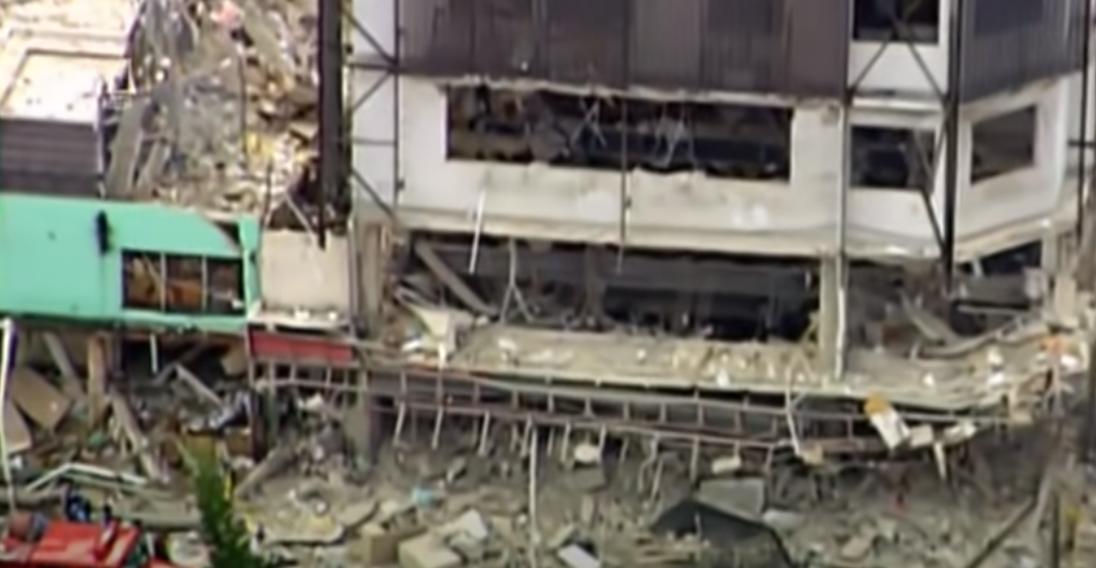 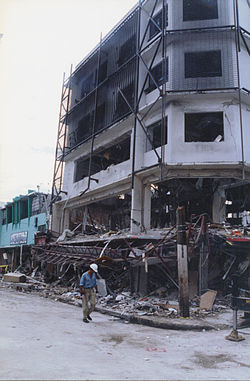 It killed 33 people and wounded 69 others.

As explored by PcMan, "Explosion" is a technical term. I'm not going to get into a lexical argument here - It will "explode" as per the common vernacular and that's all I'll say on it.

Acetylene sinks in air, and will pool at ground level. It will burn when mixed with oxygen, but a multistory building the gas mix will be imperfect - The presence of a basement below the leaky doors / windows also influences what happens - there was a basement capturing the gas in this explosion. In any case you'll get a gradient of fuel / oxygen, with more fuel at the bottom and more oxygen at the top. This gradient reduces the power of the "explosion" - it doesn't all go up at once.

One difference between this explosion and your hypothetical explosion you're describing is this explosion was caused by the similar Propane (46MJ/Kg) vs Acetylene (48MJ/Kg) - yours could theoretically be slightly more energetic. Both sink in air, allowing them to pool in the same manner.

This was a 1996 explosion in Puerto Rico. A documentary explored this disaster and is on youtube.

To integrate the two existing answers, which are already pretty good, don't forget that things will get worse, damage-wise, if the building is made with a wooden frame instead of a concrete frame.

Wood, as opposite to concrete, is flammable. And a university campus contains a lot of paper, very easily flammable. A post-explosion fire is almost granted, starting from paper, wooden splinters and then beams, and once it gets to the frame the damage would be even worse than what you can see in the images posted by Ash. 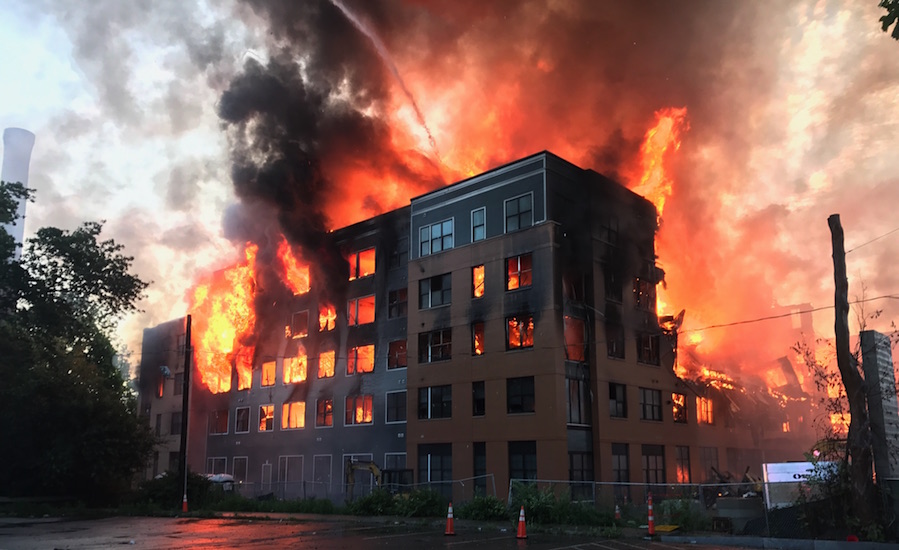 Not the answer you're looking for? Browse other questions tagged science-based physics earth-like chemistry explosions or ask your own question.

7
How much force would be required for an explosion on contact?
7
Would an explosion or energy discharge permeate to other spatial dimensions?
3
Particle Accelerator Explosion
6
Is it Possible for a Biological Creature to Spew/Breathe an Explosive Instead?
4
Is there any way to estimate the carrying capacity of large fliers?
1
How strong is the “explosion” of a bubblegum?
10
chance of surviving a planet killer explosion