Logistics of a steam-powered subway system

What is the best way to deal with the excess steam? Will there be lines of chimneys rising from the ground above the train tunnels? Is soot from the burning coal going to become a problem eventually? What would the ideal light source be, since electricity hasn't been properly utilized?

Also, assuming late 19th-century steam engines, would the subway system be efficient enough to be practical, taking into account the speed of the trains? Would it be more practical to use it for cargo transport or simply for longer distance travel?

I hope this question isn't too broad to be answered. Thank you!

Make it steam-powered, but not in the way you're thinking.

In your steampunk world, clever inventors are going to realize that inhaling the effluvia from coalsmoke and being rained upon by condensed steam is going to be unpleasant for travellers - so why not do away with the locomotive?

Cable cars allow you to move the generation of motive force aboveground, to "cable stations" which could vent their steam and smoke normally, while people underground cruise along in easy-breathing (and quiet!) comfort.

It's not even that steampunk - Glasgow did it, after all!

Also, considering @user535733's answer - while many subways switched to electrification as soon as it was feasible, the Glaswegian subway stayed cable-driven 'til 1935, so as I said above, all of the unpleasantness of a steam engine in a tunnel was avoided!

Let's see what Wikipedia has to say about the real-life steampunk subway: The London Underground.

While steam locomotives were in use on the Underground there were contrasting health reports. There were many instances of passengers collapsing whilst travelling, due to heat and pollution, leading for calls to clean the air through the installation of garden plants. The Metropolitan even encouraged beards for staff to act as an air filter.

Subway construction exploded in London, New York, Paris, and other places immediately after the availability of electric traction.

That's how awful steam-powered subways were.

As an alternative, consider working with cable railways or pneumatic railways, both of which are centrally-powered (avoiding the pollution problem) and were available before electrification. Neither will give you classic, heavy 8-car long trainsets. Both are more suited to smaller, lighter sets (like trams) that must, in turn, run very frequently to achieve much capacity.

Wikipedia describes mine railways with steam locomotives. The technology is certainly doable, but of course, coal powered locomotives are notoriously filthy. Wikipedia describes condensers to recover steam as water, which seems practical. If you go this route, you are basically doing historical fiction.

If you want a distinctive subway, I'd suggest instead pneumatic tubes. These could be steam powered, somewhere, but rely on pressurized air as the immediate power source to move the people and freight. It seems a system prone to frequent and amusing mishap, especially when guys with steam hammers implanted in their ulnas start elbowing each other in a cramped capsule.

As others have pointed out, this is more about history than fiction.

would the subway system be efficient enough to be practical

Right from the beginning there were passengers.

Trial Trip on the Underground Railway, 1863 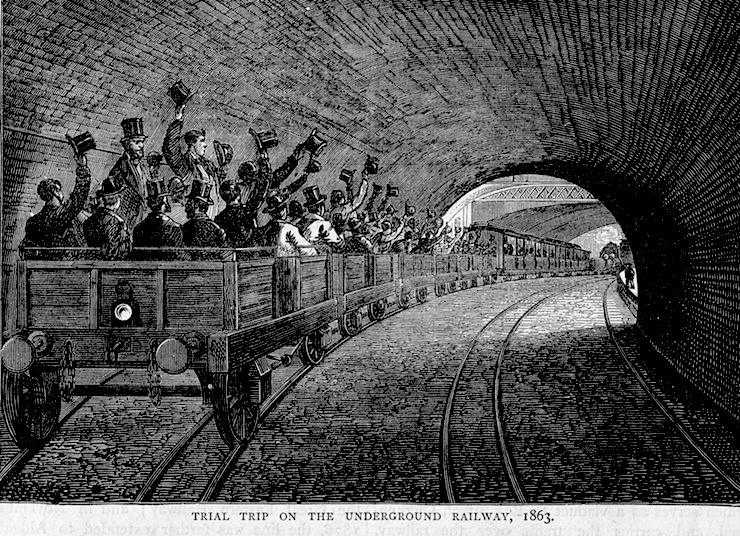 What is the best way to deal with the excess steam?

There was a lot of work on reducing the pollution underground, for example:

"Fowler's Ghost" is the nickname given to an experimental fireless 2-4-0 steam locomotive designed by John Fowler and built in 1861 for use on the Metropolitan Railway, London's first underground railway. The broad gauge locomotive used exhaust recondensing techniques and a large quantity of fire bricks to retain heat and prevent the emission of smoke and steam in tunnels. https://en.wikipedia.org/wiki/Fowler%27s_Ghost 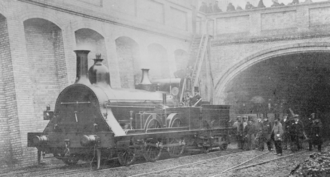 What would the ideal light source be

Oil lamps were used on the engines and wagons and gaslights were used in the stations. 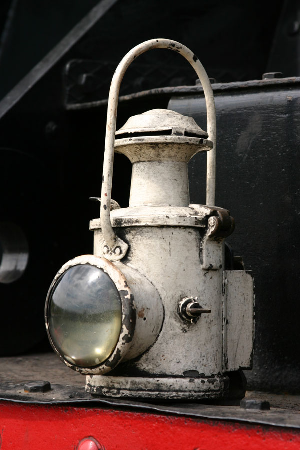 this question reminds of the Ely Beach Pneumatic Transit device, designed by Alfred Ely Beach and was the first subway in New york. it had cylindrical "trains" which would be pushed by air pressure produced from fans (yes really) and would direct the trains by opening and closing valves of the same diameter that the trains would move through. if your subway used a similar network of valves to move trains but by using steam to create air pressure through togglable ducts that would switch between only letting in air or only letting out, you could precisely control interior air pressure, and by having other ducts in other chambers switch to decrease pressure while also closing up any paths the trains could go through other than the intended one, the mobile cylinder that the passengers ride would move through quite efficiently, assuming the number of trains is less than half the number of valves as two trains cant be sent to the same valve at the same time. this can be solved by having multiple redundant paths that run to the same or similar destinations, while sharing much fewer intersections.

Consider a Fireless Locomotive, using stored steam. Basically, take a steam locomotive and replace the firebox and boiler with a big, insulated pressure vessel. Fill the pressure vessel with steam every couple hours.

These existed, and some were used in urban transit. A few are still being used -- and occasionally, new ones are made! -- for special purpose applications. They need a source of high pressure steam, but they can go into buildings without polluting the air, and they won't ignite flammable gasses.

You'd still need to deal with the waste steam. A condenser would work -- most steam locomotives don't have them because water is cheap and condensers are heavy and bulky. In a subway context, you might be able to build it into the tunnel. Maybe you could have a C-shaped channel next to the tracks, cooled by piped water. Discharge the steam into it and most of it condenses.

A cable-car system is probably more practical, but that may not be a consideration.

Not the answer you're looking for? Browse other questions tagged construction steampunk infrastructure or ask your own question.

33
How can I create a map of an underground city?
4
How to design a steam powered supersonic aircraft?
4
How fast can giant underground shelters be built?
20
Steam Powered Hammer
2
Steam Powered Stem Cell Bank
8
Steam Powered Door
18
How quickly could a country build a tall concrete wall around a city?
4
Steam-powered organ
2
Impact on the Environment of a Steam-Powered World