What changes to planetary atmosphere, available materials or technology could make biplanes and triplanes remain dominant? 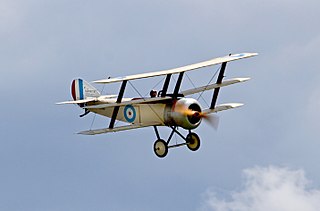 I like aircraft with multiple wings stacked atop each other; in an alternate world (undergoing a similar technological history to our planet but with a different aesthetic) I would like them to remain dominant for both commercial and military purposes: multiplane equivalents for everything from 747's to F-16's.

Historically, multiplanes offered considerable advantages over monoplane designs; you have more lift with a narrower wingspan, and the rigging made the wings a lot stiffer as well. But from my (layman) research it seems that multiple wings are a cause of excessive drag at greater speeds, which became available towards World War 2 as engines became more powerful.

I wonder what I could do to combat that. My first instinct is increasing the air pressure*, which means achieving higher speeds is out of the question. That means that drag, which increases linearly with air pressure but quadratically with speed, is less of a concern, and multiplanes might remain viable; with monoplane aircraft restricted to experimental speed machines. Then it may take days for Average Joe to cross the Atlantic but with greater lift you can put more utilities like beds aboard a plane and have it remain a viable mode of public transport.

But increased air pressure might not be the best answer. A multiplane's increased lift may be a lesser advantage when everything has greater lift, including monoplanes. Hyper-manoeuvrable fighting craft would still like that edge, but no civilian crossing the Atlantic is going to want to fly in corkscrews.

My other instinct is the inverse, lowering the air pressure. Then lift becomes a greater concern and drag a lesser one, and stacking wings may be obligatory if you want to just stay aloft. But the more efficient solution to deal with lower air pressure is generally to just make your monoplane wings bigger, and as soon as there are materials as stiff as what's considered for the monoplane flying drone that works in Mars atmosphere, multiplanes would again fall out of favour. I'm fine with restricting branches of technology or materials, but "anything stiff" might be too broad a category of tech to rule out, as it would be too influential on the rest of the world.

So I am open to other changes. Take as your baseline the Earth in the late 20th century; what can I change to make a dominant multiplane design believable?

*The answers to this question deem increasing the air pressure generally survivable. Of course a planet with twice our air pressure for its entire lifetime would have lifeforms adapted to those conditions, so I am fine with exceeding the pressure tolerable by humans, as long as the resultant planet would still support a humanoid lifeform that looks the way we do.

What if you just tweaked history a bit so that while biplanes existed and monoplanes did not, air traffic became much more common and less controlled than it is now. Their ability to navigate a much denser sky due to their slower minimum flight speed and high maneuverability would entrench the biplane so that they could not be displaced by monoplanes. The government would have to try to take away every family's biplane. That would relegate monoplanes to trans-oceanic journeys were they take off from near the coast, and maybe a few select cross continental routes.

Monoplanes displaced biplanes when the materials and technology became available because they have less drag which lets you fly faster. For a monoplane to flower slower than a biplane you need something with long, thin wings like a sailplane but those aren't manueverable, not to mention tricky to build.

On the other hand, this same logic opens the way for things like gyrocopters which might be even more suited to the scenario than biplanes.

It's unclear to me how this would affect military aircraft though since they tend to set the rules during war time. On the other hand, no Nazi wants to fly an F16 to bomb London and collide with people just commuting to work. Well, they could just fly higher, I suppose.

Alternatively, Or you could also tweak history so that cheap refining of aluminum (which was very very recent) was never discovered. That would take a lot of monoplanes out of the sky leaving only wood skinned monoplanes, which you would then have to explain away somehow.

A world with very tall trees. As in a setup where you have trees with height 1000m and beyond. If majority of flying fauna have multiple wings this would further push thinking to multiple wings.

Tall trees would discourage long wing span to avoid collisions. High speed below tree tops would be risky. Tree top airfields might be a thing, and small compact aircraft would be useful there as well.

A few thoughts (and lots of epically bad weather):

First, if the visibility was low, aerial hazards frequent, and radar less effective, the ability to avoid sudden hazards (or impact those hazards at low velocity with lifting power left over in case of damage) would encourage biplane and airship development. In THIS question, I suggested thick clouds and aerial lighter-than-air plants as natural hazards that would make high air speeds lethal. An early, really cheap and easy ultralight biplane design (filling the sky with planes) or some very logical reason for massive numbers of kites (say, for example, constant storms make kite-based or barrage-balloon-style lightning capture a practical power source) would also make the skies filled with obstacles that a regular plane would have conniptions dealing with. So endless dark thunderclouds.

Secondly, biplanes ALSO require very short runways. If you can think of scenarios that require all or most runways to be very short, then biplanes, helicopters and autogiros will be strongly favored. Extraordinarily rough and irregular terrain would mean all early runways were short, twisty affairs. An extremely mountainous world would mean that you COULD build fixed-wing planes, but why would you? Maybe for REALLY long flights to REALLY big places. Strong, erratic winds would also make large planes needing long take-off times would be at a disadvantage. So a mountainous world with many small volcanic islands and atolls.

Finally, have you considered alternative biplanes? Canard designs (for example) are technically biplanes, but might not meet your criteria. HERE is a proposed supersonic biplane. It means that with appropriate acceleration first, a biplane can avoid the issues other supersonic planes have with sonic booms and have stable cruising speeds. So imagine if the original designer of this concept had lucked out and stumbled onto (or been secretly supplied...) a design allowing this concept to be carried out with existing tech and rockets for initial acceleration? You could skip the clumsy age of the monoplane and launch your biplanes into the supersonic age!

The big factor that made biplanes and triplanes preferable in the early days of aviation was the low power to weight ratio of early engines. This made it necessary to save as much weight as possible on aircraft structure. A monoplane wing will tend to be heavier than a biplane wing for a given strength, but the increased lift-to-drag ratio will make it more efficient at higher speeds.

Given this, if you want to make biplanes more prevalent (not sure you'll be able to completely exclude monoplanes while flight is still practical enough to be useful), limit the availability of powerful engines and/or increase the gravity. You could also reduce the availability of high strength/weight materials, but that would mean no aluminum, steel, titanium, wood or composites, not just for aircraft but for this society as a whole (unless you can justify why they use them for some things, but not aircraft, where they would be most useful).

Reducing the air density alone won't exclude monoplanes until the density is so low that flight is impractical. However, it could make multiplanes more prevalent in cargo/passenger roles as long as you also restrict runway length and/or engine performance (otherwise they'll just settle for higher minimum airspeeds and long runways). Unfortunately, low air densities will also reduce maneuverability (all else being equal), so these aircraft may be more aesthetically pleasing, but they wouldn't be very fun to fly.

Higher air densities make high speeds less practical, and reduce the relative benefit of the monoplane planform. However, they also reduce the amount of wing area necessary for flight at a given speed and weight, so increasing air density without making any other changes might just make blended wing body, or "flying flapjack" style aircraft preferable to multiplanes instead. As such, increasing air density is best done in conjunction with other changes.

Bear in mind as well that air density decreases with altitude, so as long as cabin pressurization is possible or the pilot/crew/passengers already have their own life support systems, aircraft may simply opt to climb to an altitude where the air is thin enough to permit high speeds. Higher gravity and/or less powerful engines may make this impractical and force aircraft to remain low and slow.

Perhaps this is a world that for whatever reason (not life-bearing, recently terraformed, necessary conditions were never met, etc.) never formed hydrocarbon fuels, or perhaps they've all been used up. Either way you're left with electric powered aircraft where batteries comprise most of the aircraft's weight. Alternatively, maybe environmental restrictions have forbidden combustion based engines, or reduced their power though emission control measures. Maybe the atmosphere has no free oxygen, so the aircraft also has to carry its own oxidizer, again reducing the overall power-to-weight ratio. You just need to restrict the weight fraction available to the airframe until designers have no option but to resort to multi-plane configurations.

As far as performance targets, you wouldn't want to go below 5 W/N for a fully laden aircraft. 10-15 W/N tends to be the lower limit for practical performance (most WWI era fighters, and general aviation aircraft like the Cessna 172 fall in this range). WWII era fighters by contrast tended to range from 25-35 W/N.

Increasing gravity by itself would increase weight without increasing engine power, so it would allow you to dial up the minimum strength-to-weight ratio of an airframe until monoplanes were impractical. However, this would also have impacts on planetary life, and earth is already near the atmospheric escape threshold of helium (at least for surface temperatures that can support life as we know it). A planet with a higher surface gravity would require a corresponding increase in surface temperature to avoid becoming a gas giant (though there's no reason you couldn't have a Bespin-like colonized gas giant).

The only way I can see biplanes remaining common is if they were to replace the automobile. Biplanes and triplanes have much more lift compared to a similarly sized monoplane. So maybe in your universe, nobody owns cars, they have biplanes. This is because a biplane can use very short runways, in a suburban setting they may be right in front of each home. In an urban setting perhaps each rooftop has one somewhat like a helipad.

Not the answer you're looking for? Browse other questions tagged technology flight aircraft or ask your own question.

4
What armament would be best for a 21st century airship?
3
How would a human body behave if the atmosphere pressure were 2Atm at the sea level?