How could a creature move through space realistically without any additional technology?

I would like to have a space whale type creature that can fly through space. It would be very large and fly from planet to planet using orbital maneuvers. I want this creature to be able to do it naturally as if the species evolved in space as apposed to on a planet. I imagine wings wouldn't work as there is no air to push against. The only thing I can think of is it spitting in one direction to propel it in the other but I don't love that idea.

You can Sail On Light: 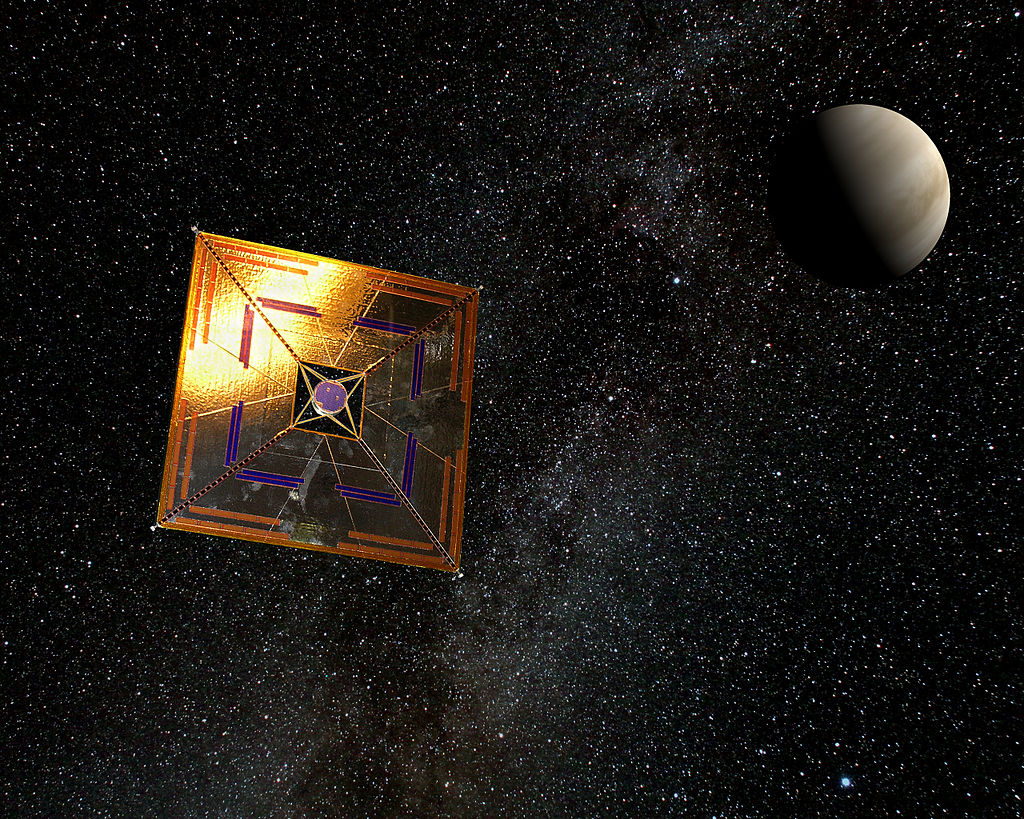 It's very slow, but with a large reflective surface you can use solar pressure to get acceleration. This would allow your whale to maneuver around a solar system.

Keep in mind that because of orbital mechanics, you can even use this to go inwards toward the sun (acceleration takes you out -> your orbit is now elliptical -> eventually you come back in).

It could also use gravitational slingshots to gain speed for interplanetary travel, and maybe have some kind of gas release (Such as waste gases like methane from digestion) that are able to be 'farted' out (For lack of a better term) to adjust direction manually, like a natural rocket. The act of letting gas out would alter direction, like a breach in a space habitat.

I'm more curious as to how the creature wouldn't be killed from the pressure differences between vaccuum and.. Anything else, most liquids would boil in space. I am presuming some natural kind of radiation resistance is evolution at work.

Another idea for mineral intake is that the creature works similar to a modern basking shark (And the like) in which they filter feed. Instead of small animals/ bacteria, a nice idea may be that they reside in a densely packed nebula and/ or a ring system around a gas giant, allowing them to take in minerals they need from gases and dust in space itself, and potentially high atmospheres of planets.

Some food for thought ^ ^

If you do this,you definitely need space dragons of some sort as a natural predator. Maybe even parasites that live inside the creature like Mynocks from Empire Strikes Back :P

In regards to a comment about the SW being about 1/3rd Earth's size, I'd like to point out some stuff to consider (I don't have enough rep to reply directly); -This thing is going to have a noticeable gravitational pull; it will affect the tides of an Earthlike planet like our own moon. This could be part of the folklore for X race, that these sky whales are interpreted as some kind of danger omen in their beliefs. Or gods, who knows?

-A creature that big will require tremendous amounts of energy to live. Due to space being space, I'd say the best option is to have it be a slow nicer but have a slow metabolism; it filter feeds and gains energy that is released slowly as opposed to quickly. This would make it a slow creature, though remember space is big. It takes 8 minutes for light to hit us from Sol, and 11 for us to send light to Mars. This thing will be travelling for months or years at a time between planets, so it is vital that it is not burning it's energy too quickly. Gas giants? No-no, the sun is too far away (Unless it's a rare circumstance like an extrasolar capture) that if it gains energy from light, it's not getting energy that far away.

If a true reactionless drive is possible, then you could simply posit that your space whale evolved one biologically. And if it could do that, then surely it could evolve a kind of fusion power source to power it, as well. The advantage of a reactionless drive is that you are somewhat freed from the Tsiolkovsky rocket equation, so you should be able to accelerate to very high speeds (though only slowly, given current designs).

Also, you have to consider that at relativistic speeds, you really need good shielding, or you will get irradiated to death (a particular problem for biological systems). Your whale will need some kind of special carapace to protect it from cosmic rays and other hard radiation.

Magnetic Sails
Work by interacting with the Solar Wind and generate about the same thrust per weight as solar sails. However, they have some abilities that Solar Sails do not.

Electric Sails
Work by interacting with the Solar Wind too. The E-sail has less research behind it.

The book The Black Cloud posited an intelligence formed by a "Black Cloud". The cloud used magnetohydrodynamics to propel chucks of the cloud at sizable fractions of the speed of light as its means of propulsion. Unfortunately, all that was a bit of hand waving.

The problem is that space is too empty to sustain any sort of life that we know of. Not enough nutrients and not enough readily available energy sources in between the planets (let alone the stars).

To dependably move fast, it would have to have a black hole inside, and then use a form of directed gravity to pull itself towards its destination.

Either that or somehow open wormholes.

10
Alien Griffin Design
6
Great Flying Cthulhu
6
How would a giant, living, flying island evolve?
0
How could an organism move through space freely without the use of technology?
9
How would it be possible for a species to evolve naturally occurring halos?
9
Flying or swimming in supercritical CO2?
7
How could it be possible to exert gravity without mass?
5
Artificial gravity as an engine