How can I get a very large air bubble floating under Europa's ice?

I hope this isn't a stupid question ("just add air").

I would like my intrepid explorers to have drilled through the ice of Europa and into the water without creating a geyser (they plugged the hole behind them). This is assuming a liquid subsurface ocean. 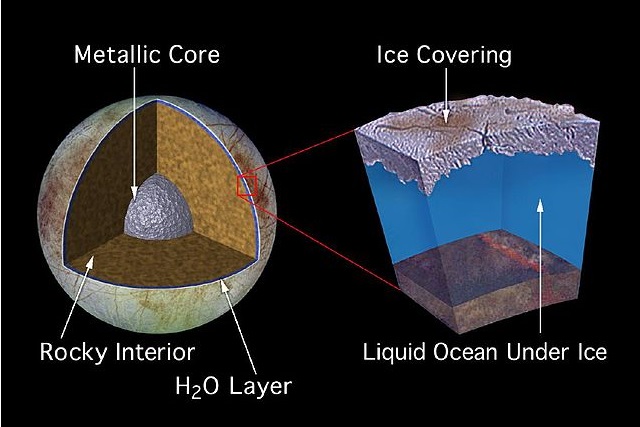 Once under the ice, they encountered a very large, stable cavern of air between the water and ice. Their submersible 'surfaces, and when they look around they see water, and when they look up they see ice. It measures several kilometers wide and at least one km high to the ice. I am not married to those dimensions, though.

It doesn't necessarily need to be breatheable, but it should be enough that they can exit their vehicle with scuba-like gear (ie - breathing and warming/cooling apparatus). However, bonus if they surface and the pressure, temperature, and composition are suitable, however shortly.

I really hope this isn't as straightforward as it seems.

It seems you can find everything you need in Wikipedia:

Europa may have periodically occurring plumes of water 200 km (120 mi) high, or more than 20 times the height of Mt. Everest. These plumes appear when Europa is at its farthest point from Jupiter, and are not seen when Europa is at its closest point to Jupiter, in agreement with tidal force modeling predictions. The tidal forces are about 1,000 times stronger than the Moon's effect on Earth. The only other moon in the Solar System exhibiting water vapor plumes is Enceladus. The estimated eruption rate at Europa is about 7000 kg/s compared to about 200 kg/s for the plumes of Enceladus.

In other words, Europa may have cryovolcanoes/geysers. These cryovolcanoes would, presumably have the possibility of becoming extinct. When operational, a cryovolcano would draw whatever gases are dissolved in Europa's ocean (CO2, N2, CH4*) to the surface, where they would come out of solution. It's therefore not only possible, but quite likely, that if there are extinct cryovolcanoes on Europa, they have gas pockets beneath them. It also gets round the issue of the thickness of the ice, which as a best estimate seems to be several miles, but could be much thinner under an extinct cryovolcano. Even an active one might do, 7000kg/s is not a particularly high flow rate, and according to the theory these cryovolcanoes are only active once per orbit (3.5 days.)

*Normally it is difficult for O2 to exist because it is so chemically reactive and tends to combine with other elements over a geological timescale. But Europa apparently has a mechanism for splitting H2O into H2 + O2 and ejecting the H2 into space:

Unlike the oxygen in Earth's atmosphere, Europa's is not of biological origin. The surface-bounded atmosphere forms through radiolysis, the dissociation of molecules through radiation. Solar ultraviolet radiation and charged particles (ions and electrons) from the Jovian magnetospheric environment collide with Europa's icy surface, splitting water into oxygen and hydrogen constituents..... Molecular hydrogen never reaches the surface, as it is light enough to escape Europa's surface gravity.

Some of this may make it into the oceans:

Observations of the surface have revealed that some of the molecular oxygen produced by radiolysis is not ejected from the surface. Because the surface may interact with the subsurface ocean (considering the geological discussion above), this molecular oxygen may make its way to the ocean, where it could aid in biological processes.

Introduction
You want beans with that?

I can think of two natural processes that might generate a very large bubble of gas under Europa's ice. 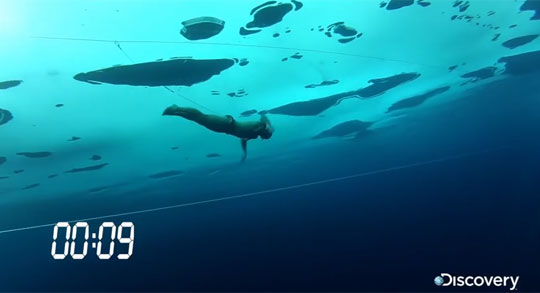 and no, flatulence isn't one of them.

Precipitation
The first would be an ocean completely saturated with gases (you can pick your gases but some of them are not as suited to this as others) encountering conditions (lower pressure / higher temperature) which causes some of those gases to precipitate / out gas.

If the process needs to be abiotic, then the most likely composition of this gas would be the volcanic gases (shown below). But if you have a lively biosphere, then it could be something like $O_2$ or other biological gases.

The bubble would be created when the water conditions suddenly changed. For instance, if the layer of ice above it suddenly thinned and the temperature increased (say due to ice crustal deformation).

Out gassing
The second would be volcanic fissures releasing gases beyond what the ocean can absorb (another case of a saturated liquid). On Earth the volcanic gases most likely to be encountered are:

The problem
The problem is this condition is not stable. The gas is MUCH lighter than ice and will flow through any cracks to reach the surface. I wouldn't expect it to last long. Since I have no background in this subject I couldn't tell you how long is "not long".

It could fail by gradual (or sudden!) deflation, gradual reabsorption by the water, or most spectacularly by the sudden break-up of overlying ice.

I hope a temporary bubble is good enough for your purposes.

Size
Since the ice above this air has no support, there are mechanical limits to the amount of air in this space. Under great pressures (like a mile or more of overlying ice), ice tends to flow like plastic.

This is another reason I think the bubble would be a temporary feature. The larger the bubble the shorter the time it could exist.

Not only are you dealing with a creating a pocket of air under the ice you have to deal with the pressures. Some say the Ice could be 62 miles deep. That is a lot of Ice over your head and putting a lot of pressure on the 'air' in the space. It would have to be at the same pressure as the water because if it was less, the water would push up into the cavity until they reached equilibrium.

It actually may just be that simple.

The concern is presumably one of structural integrity of the ice layer above and the ability for a gaseous atmosphere to form (and not precipitate immediately). I think there are not specific data on this, but it appears that a cave of the size you mention is feasible for the ice of Europa. Actually, I think the least plausible part of the layout is that there would be a liquid surface. There would very likely be a layer of ice on the water inside the cave. It might be broken through in many places from ice falling from the cave ceiling above, but I don't imagine it would stay liquid. The air inside is presumably warmer than the ice though, so it may help that it's slightly melting the surrounding cavern which, upon refreezing, would create an airtight seal. The stability is likely only in the thousands of years range though, the tidal forces from Jupiter will likely cause such a structure to eventually fail. 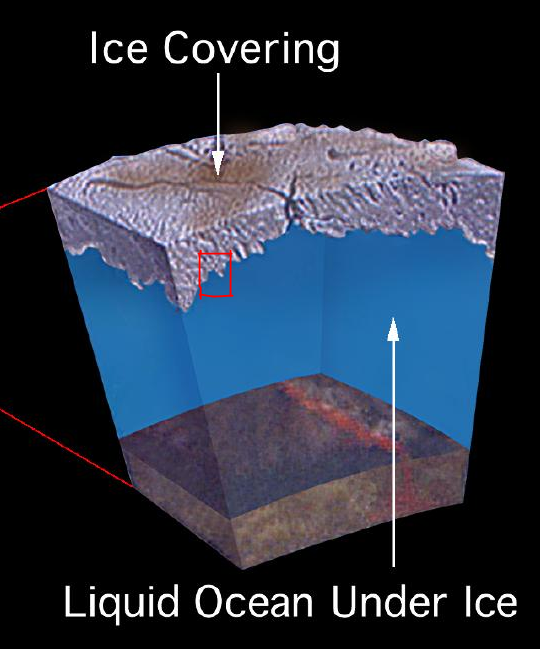 Think about the scale of things here. The small squared off section is way way bigger than the area you're asking for. If you were to add about a 100 million cubic meters of pressurized air to that space it would provide the bubble you're looking for.

The Wikipedia article you linked states that the very cold surface temperature of Europa makes the surface ice "as hard as granite". Granite is a pretty tough stone. There are some very large cave systems on Earth which are made of limestone, which is about 50% stronger than granite. However, gravity on Europa is also 7.5 times less than on Earth, so larger structures would be able to form.

Europa has a weak atmosphere of oxygen. Though it's difficult to hypothesize a way for very much to get under the surface ice. A more feasible idea might be that the gas is a byproduct from organic life or a chemical process related to the hydrothermal vents. It would strain plausibility for it to be breathable.

I suspect that due to the cold and huge depth of the water column, gasses dissolved in the oceans of Europa will stay dissolved, so cracks in the ice "crust" will fill with water rather than gasses. This may partially explain the cryovolcanoes observed on Europa; if the ice cracks open enough to expose the water to vacuum, the gasses will explosively come out of solution.

For your intrepid explorers, they might be able to use shockwaves or other means to try and trigger the release of dissolved gasses inside a crevasse under the ice, but will need to be very careful. The released gasses will temporarily displace the water and create the cavern you are looking for, but as noted on other posts the temporary cavern will not have breathable air, and the gasses will either be reabsorbed by the water or leak through the ice towards the surface. Calculating how long this will take depends on a multitude of factors, but the cavern will probably be "dry" for only few years at most before the gasses are absorbed, leak out or "geological" processes cause the ice crevasse to close up on its own.

Not the answer you're looking for? Browse other questions tagged planets space exploration or ask your own question.

19
How big can a space empire get?
37
Stumped: How can I get a huge Earth-like planet?
6
How cold can a planet actually get?
5
How can a small planetoid hold an atmosphere under artificial means?
9
How large can an apparent size of a moon be?
7
How can I make a planet covered in ice with an ocean beneath the surface?
7
How close can a ship get to Sagittarius A?
1
How can I get a total solar eclipse to be a yearly event?